Chunk! No, Captain Chunk! – Get Lost, Find Yourself

Influenced by one of my most favoured childhood movies ‘The Goonies’, the French five-piece Chunk! No, Captain Chunk!, have been around the music scene since 2007. ‘Something for Nothing’ didn’t make an appearance until 2010, with signature pop-punk vibes and hardcore undertones, getting us all hooked like addicts waiting for our next hit. Leaving us […] 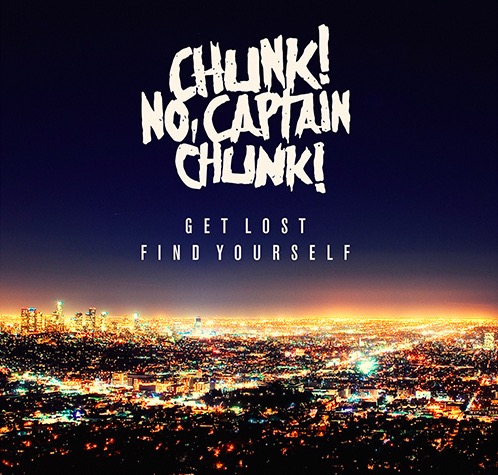 Influenced by one of my most favoured childhood movies ‘The Goonies’, the French five-piece Chunk! No, Captain Chunk!, have been around the music scene since 2007. ‘Something for Nothing’ didn’t make an appearance until 2010, with signature pop-punk vibes and hardcore undertones, getting us all hooked like addicts waiting for our next hit. Leaving us wanting more they waited a gruelling three years before releasing ‘Pardon My French’ which really made the hardcore influence shine through. Even with drummer Jonathan Donnaes quitting the band – who quite frankly in my eyes provided some amazing drum input on the last two albums – the band’s return sees them really stretching their musical muscles. ‘Get Lost, Find Yourself’ made it’s debut on the 18th of May, delivering 10 tracks of pure pop-punk spitfire energy accompanied with their well known breakdowns and hardcore dominations. Although, Chunk! is known for their oddball styles that are guaranteed to get a pit !
moving, they make it evident with this third album that they take music seriously and want to prove that they have matured considerably, not only as individuals but also as artists.

The first track “Playing Dead” introduces the record quite well, it’s an upbeat, fast paced track. The tones of the vocals are adequately tight with simple yet impressionable lyrics. The only downfall for this track is that it all seemed to become a tad bit repetitive halfway through and failed to make a lasting impression. Despite this, it is still certain to go down well with the lively crowds that Chunk! attract at shows. After listening to the album numerous times and developing a strong grasp of the record as a whole; “Get Lost, Find Yourself” quickly evolved to my most adored track. The acoustic melodies are a softer approach to what may be expected from Chunk!, however, I find myself being transported to somewhere less complicated in my mind, I feel nostalgic with my true pop-punk self, finding I am engrossed in the melodic guitar tones and simple and infectious vocal melodies. Upon hearing “City of Light” all I wanted to do was thrust my angry “no one underst!
ands me” fist in the air and scream along with the lyrics“Can’t stop us now, we’re burning this city to the ground”. The lyrics were meaningful and called out to my music laced soul, and quality of performance from the instruments really set this track off.

Overall, as a ten track piece it really did flow with ease and consistency, each song in their own right is catchy and upbeat and Chunk! is sure to make an impact on the younger generation that are just starting to find themselves musically. However, I did find my undivided attention slowly began to drift after a fair few listens. It was no match for The Story So Far’s recent self-titled album, which is constantly on a loop, and sadly Chunk! start to nonchalantly fade into the background. I’d rate the whole album as a solid seven out of ten, with at least six of the tracks making a reasonable impact. I wasn’t completely won over, nor was I passionately in love with it but if you enjoy the sounds of A Day To Remember and Attack Attack! then I would still recommend giving the album a listen.