Cheap Meat – The Parts That Show

The blueprint for debut EP The Parts That Show was laid down over a summer of barbeque cookouts and listening to punk rock albums. 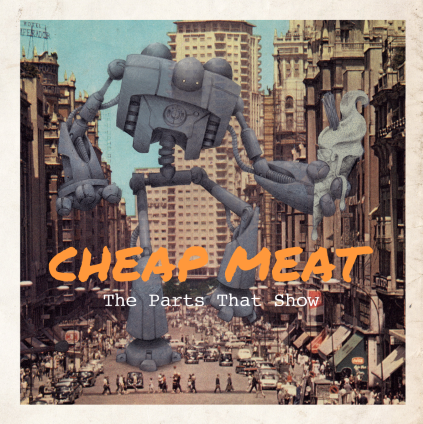 Cheap Meat may have had an unusual formation, with guitarist/vocalist Ross meeting drummer Matt at a pub quiz hosted by former Coronation Street actor Martin Hancock, where they met someone who ‘likes the same bad music’. The blueprint for debut EP The Parts That Show was laid down over a summer of barbeque cookouts and listening to punk rock albums, after starting as a duo, they realised that there was something missing and so after a gum-tree advert, bassist Pete was found to fill the void and add an extra element to the band.

Opening with the title track, sees pounding drums. While not the catchiest of tracks, the simple melodies make it effective and the electric riffs add some excitement. The Distance Between You And Me brings the standard of the EP higher and takes a sinister twist with darker lyrics with an electric guitar solo that shows talent. First single Sweetness, Takes Me Back is the strongest track on the record. EP closer For A Moment sounds like a cross between old-school Green Day and Blink-182 its a very catchy track.

Overall, the EP has areas for improvement, however as a debut release, it is pretty good. The lyrics are tongue-in-cheek and guitars are reminiscent of the likes of Eddie Van Halen, the solos are very ‘out there’ and electrifying. Vocals are great throughout the album.