It’s pure metal mayhem in Cardiff as America’s Butcher Babies are joined by Canadian’s Sumo Cyco as their tour hits The Globe for the first of two Welsh dates. 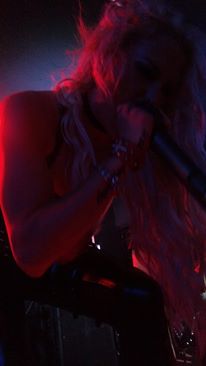 It’s pure metal mayhem in Cardiff as America’s Butcher Babies are joined by Canadian’s Sumo Cyco as their tour hits The Globe for the first of two Welsh dates.

Opening the show are Pontypridd’s Dethias. The atmospheric metal band brought their concepts to life as they power through tracks including Sun Veiled in Black, King of No Glory and Demon in the Mist. The stage isn’t enough for guitarist Steven Bowers who heads into the crowd to play. The growls from frontman Dan Griffiths are tight and they get the crowd going with plenty of crowd interaction for sing-a-longs and customary alcohol discussions before launching into their closing track Battleborn. A great performance from the talented six piece.

Up next is Sumo Cyco. The Canadian quartet launch into Cry Murder with some incredible vocals from frontwoman Skye Sweetnam. Again the stage isn’t enough as Skye heads into the crowd to join the pits before heading up onto the balcony. The stage presence of the entire band is great and Skye controls the crowd really well as they play through tracks including Crowd Control, Like A KIller and Move Mountains. There seems to be a pattern of metal bands not wanting to play on the stage because lead guitarist MD13 becomes a monkey and climbs a massive speaker to perform on before leaping off and almost landing back on stage gracefully. The punk metallers end the set ith My Name is Rock ‘N’ Roll.

Then comes Butcher Babies. The LA quintet, led by dual frontwomen Carla Harvey and Heidi Shepherd who bring the sass, million-dollar smiles and true rock chick style, decked out in leather and corsets. Opening with NBA there isn’t a moment when the crowd aren’t captivated by the five on stage, while needing no encouragement to lose their minds (this is the only rule at a Butcher Babies show), there’s stage dives from the crowd and pits galore as the quintet plow through a strong set including Butcher, Ignite, Mr Slow Death, Dead Man, Take Me Away and closer Axe Wound. The hypnotising performances of the frontwomen and the pounding bassline ensure that all enjoyed and are counting down the days until a return to Cardiff.