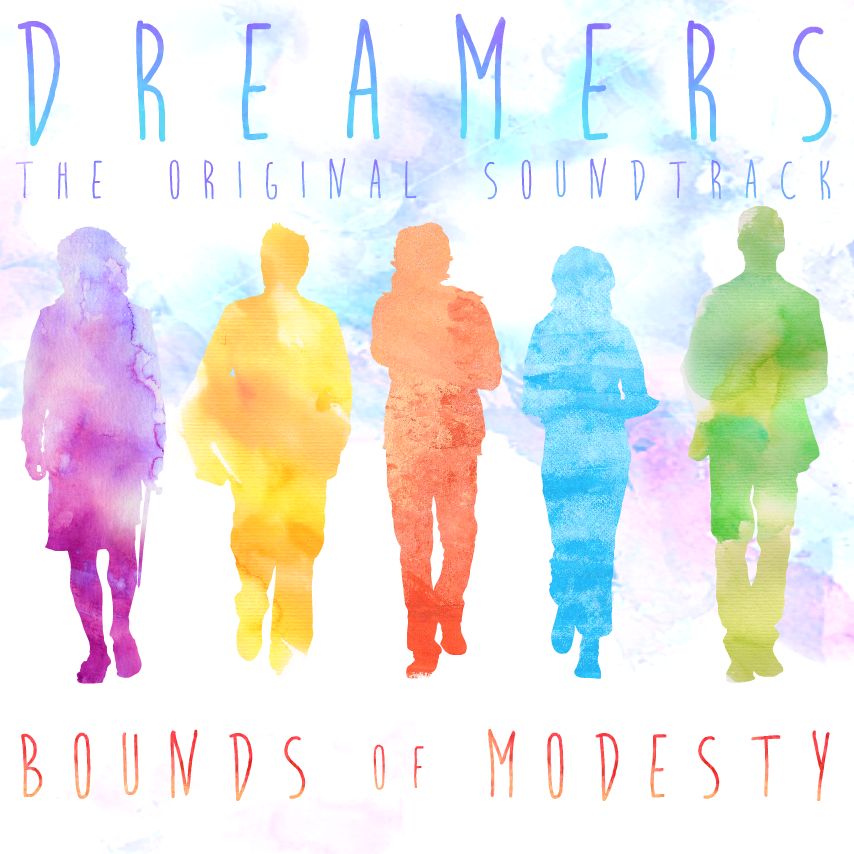 Amsterdam Pop Punkers Bounds of Modesty provide us with an experimental ep “Dreamers”, soundtracking indie film of the same title. Suitably released for valentine’s day, the film follows five young friends in search to fulfill their own ambitions and dreams whilst faced with obstacles along the way in a heart warming and feel good indie film, duly echoed into the apt soundtrack. The tracks ingeniously are relevant to events of the film and are nothing short of exhibiting musical talent and the core vibes of “Dreamers”. Opting for a more folk sound with pop punk elements instead of their usual fresh straight pop punk sound, Bounds of Modesty accomplish a great attention to detail through this style that wouldn’t be found in previous records, creating an inspiring and profound folk rock journey.

Opening track “The Heart Wants” is initially melancholic before turning into an emotional, punchy track about struggling relationships, not the most instrumentally strong song on the record but more focused on delivering hearty vocals from frontman Callum Stamp, helping to create one of the strongest songs on Dreamers. Highly catchy choruses with driving guitars creates a tune most expected to be the one a crowd would sing their hearts out too at a Bounds Of Modesty show.

More significantly mellow, following track “While We’re Lost” is a more emotional moment of the record with inclusion of harmonium and ukeleles to soften its delivery and enhance the collaborative depth Bounds Of Modesty were aiming to achieve in the creation of the record. Based again on an intimate theme, moments of climactic raw vocals and the inclusion of more folk style instruments advances the poignant message of the song, creating a solid standing for the rest of the album.

“Superheroes” feels like a continuation of the previous track, as though taking a call and answer approach relevant to its role as soundtrack for the film. Continuing the mellow and thoughtful theme, it’s a powerful and uplifting track, contrasting to the solemn nature of its predecessor. Roughly using same instrumental theme, it’s a suitable midpoint track before coming to the final two songs.

Back In The Day” reminisces upon youth and ease of life before the stage of growing up. A passionate song with the inclusion of some angsty backing vocals, this is easily one of the most catchiest and warming tracks on the album. Straight to the point with delivery of its anguished nostalgic vocals, the folk inspired instrumentals furthermore add to the depth of the track and give it a real relatable and storytelling feel. Finishing the track, “Awake” rounds off the record with a message of self realisation and change. Prominent violins, backing vocals and acoustic guitars fire up the emotion once again in a passionate and almost ambiguous conclusion to Dreamers.

If you like modern pop punk bands such as The Front Bottoms, Modern Baseball and significantly The Wonder Years, Bounds of Modesty generally will be your thing. Lead singer Callum Stamp’s voice and writing echoes of influence from The Wonder Year’s Dan Campbell with equally twangy riffs from Jan PapenFuB on guitar and Richard Robin on bass and raw, frantic drumming from Dylan Thoma in their previous records. Alternatively if you like folk/acoustic rock such as Bon Iver, Mumford & Sons and Matthew & The Atlas with a pop punk twist, this record certainly will be a dream for you. Combining great musicianship and catchy youthful lyrics, Dreamers is an enchanting also anthemic effort from Bounds of Modesty displaying talent and musical understanding for something considerably experimental to what they’re used to. A real accomplishment for the hard work put into this beautiful ep.