The Barfly in Camden is a small yet respectable venue, which has witnessed many bands arriving through its doors in hopes of creating an atmosphere of pure music bliss for fans. On this occasion the venue was taken over by Blood Youth for their “Inside My Head” tour… 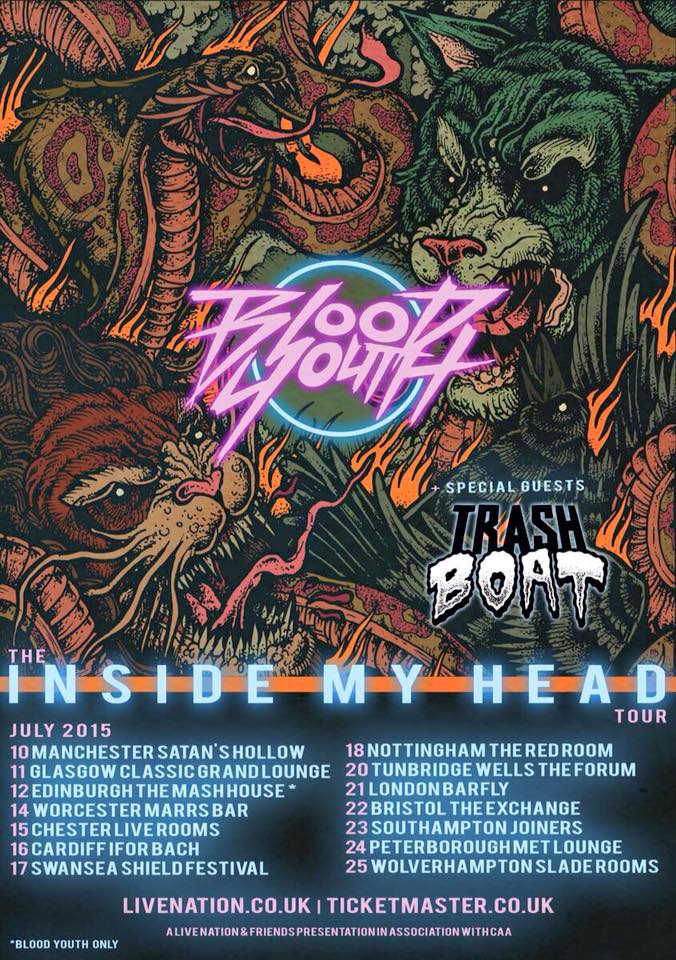 The Barfly in Camden is a small yet respectable venue, which has witnessed many bands arriving through its doors in hopes of creating an atmosphere of pure music bliss for fans. On this occasion the venue was taken over by Blood Youth for their “Inside My Head” tour. This took place in the upstairs area of the venue, and although it was small, it felt extremely intimate with each of the bands.

Kicking off the night was five piece hardcore band Wars from Rugby; they were unbelievably insane, but in the best way possible. These guys had so much raw energy partnered up with an incredible and confident presence that I was just not expecting. I had never seen band members jump into a crowd so many times to grace us with an array of heavy guitar riffs and sweat. If you listen to the likes of We Came As Romans then it’s worthwhile giving these guys a quick listen.

Next up were Blackpool based pop-punkers Boston Manor. This is when the crowd actually started to wake up slightly more, and the people surfers slowly started to emerge. Boston Manor are a personal favourite at the moment, with their pop/punk/emo influence, they just seem to make every song sound serene and yet still heavy. The pointed fingers were out in full force and directed at Vocalist Henry with mine right alongside them. Boston Manor really held their own on that stage, proving that they don’t fit into the ever so haunting “generic” label and providing so much movement on stage that invoked an energetic buzz from the crowd.

Then arrived Hertfordshire placed pop-punkers Trash Boat, being the first of the headliners. This was my second time seeing these guys and they did not disappoint. Vocalist Tobi Duncan started off their set with a stage dive, declaring that their set was going to be a lively one. The whole band provided a driven and powerful set, performing anticipated favourites such as ‘Boneless’ and ‘Perspective’, which had the majority of the fans fighting their way towards the stage. It was made clear that they deserve their place side by side with the likes of Neck Deep and the ever so successful All Time Low, on Hopeless Records label.

Second headliners Lincoln raised melodic hardcore quintet Blood Youth closed the stage with inflatable tropical palm trees and giant prehistoric dinosaurs. Before the departure of vocalist Wes Thompson the band were known as Climates, however the addition of new vocalist Kaya Tarsus has really improved them as a band, giving a savage edge to their sound. Their set was a continuous hit of intensity, each one of them showing admirable stamina whilst playing favoured hits ‘Failure’, ‘Cold Sweat’ and ‘Dead Space’. This early tour seems to be the beginning of many others in the near future, hopefully providing them with larger stages as they progress.