So for this review, I went on a boat ride (after a train ride across the border to the lovely rainy city of Bristol). The first challenge for me would be to get over my fear of boats and open water and actually get on the boat which I did complete with only a minor freak-out. But all in the name of music and to celebrate (and commiserate) the end of the British Horror Story Tour. 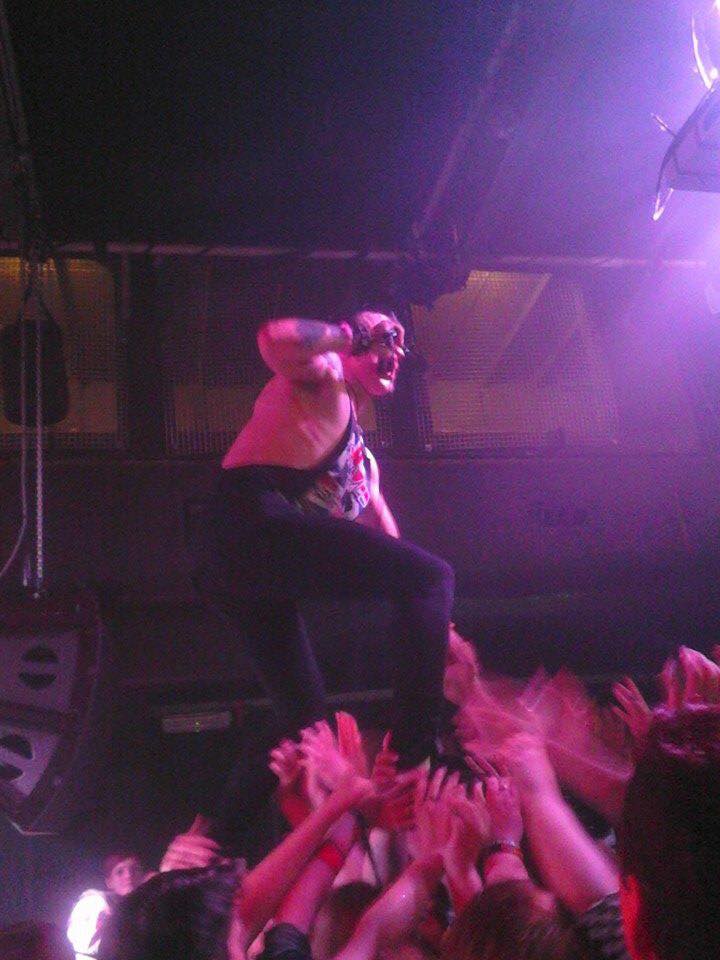 So for this review, I went on a boat ride (after a train ride across the border to the lovely rainy city of Bristol). The first challenge for me would be to get over my fear of boats and open water (yes I know it was moored but still) and actually get on the boat which I did complete with only a minor freak-out. But all in the name of music and to celebrate (and commiserate) the end of the British Horror Story Tour.

First things first, I was among 5 people treated to a short two-song acoustic set from vocalist Chad Kowal and guitarist Robby Creasey. Having only heard limited released tracks, I was seriously impressed by the soft, harmonious tone in Chad’s voice, especially during my new favourite song Paper Forts (linky here of my video I took of it so you can all hear his beautiful voice https://www.youtube.com/watch?v=XLffZhom3JM ).

After a long chat with the band following the set, we headed inside to catch Refuge Of The Fallen, the melodic metalcore quintet from Plymouth were heading out on their own mini headline tour following on from this opening slot. Their set consisted of intense vocals from Aiden Randolph and although possibly slightly heavier than the majority of the crowd were used to, received a great welcome with a couple of people starting a miniature mosh pit.

Up next were Manchester horror-metallers The Dead Xiii. The quintet launched straight into their catalogue of tracks from their debut album Catacombs as well as some favourites from EP Creatures of the Night, although after the opening track, guitarist Symon Strange had to ask for a coin as he’d lost all his plectrums, a coin was given to him and on went the show. Frontman Kurt Blackshard looked in his element as they launched into one of my favourite tracks Stake My Date, taken from their amazing debut EP Creatures of the Night. With Kurt’s vocals echoing (and in my personal opinion emulating) that of Joseph Poole himself, showing where some of their inspiration is drawn from the likes of Wednesday 13 and Murderdolls. Luckily for Symon, I had some picks on me so he was able to finish their energetic and slightly spooky set using one and also with a mini stage invasion courtesy of Farewell My Love’s Robby and Ashestoangels guitarist Adam Falkor during Xiii.

Farewell My Love were up next, receiving a rapturous welcome from the crowd. Guitarist Robby started proceedings off by announcing that the first track was being filmed for a live video and that it would be his birthday present (he was celebrating his birthday the day after) if the crowd all went mental for the video. Not to be disappointed, the crowd welcomed this and went extra mental as the opening chords from Burn Out The Night. Throughout an enthralling set, the crowd never once failed to remain calm and with crowd walking moments from Chad and the interaction from the entire band alongside fan favourite tracks including Crazy and Mirror Mirror, this was surely an amazing way to end the band’s first ever UK tour.

Closing the show was new grave princes Ashestoangels. There can’t be a better way to end a tour than in your hometown and the crowd surely made this one to remember! With vocalist Adam Crilly apologising several times as he was close to losing his voice, the crowd ensured that they were on hand to help out, singing along to every word. Opening with the fan favourite Dorian from second album With Tape and Needles. As ever an energetic set that saw Crilly in the crowd almost as much as he was on stage thankfully didn’t see any more injuries following the incident in London the previous night that saw guitarist Falkor take a bass to the face. With a set rammed full of hits including Six Six Six, The Wake, Bury Us In Black and Elsinore, it was no surprise when the crowd practically took over the entire of Still Dead, seeming to momentarily stun the band. Prior to this moment, Living Hell saw the return of Farewell My Love’s Chad to the stage as a stand-in for the Godfather of Goth William Control’s parts. The return of all the supporting bands for a cover of Horror Punk legends The Misfits’ Dig Up Her Bones made for a perfect end to what will forever stick in my mind as a memorable night and one of the best shows I’ve been to!