As It Is – The Great Depression

As It Is are back with their third album The Great Depression. The record sees the band stepping out of their comfort zone and wear their hearts on their sleeves with a record that explores the themes of mental illness and the romanticism of it in the scene. Opening with the title track, Stage I: […] 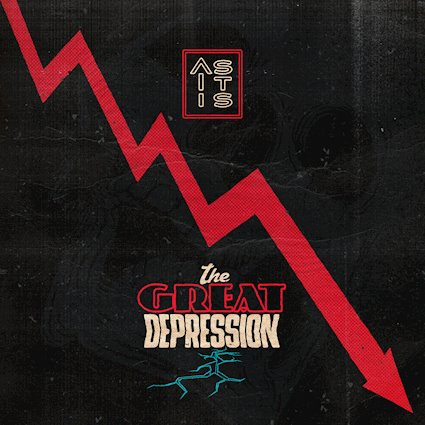 As It Is are back with their third album The Great Depression. The record sees the band stepping out of their comfort zone and wear their hearts on their sleeves with a record that explores the themes of mental illness and the romanticism of it in the scene.

Opening with the title track, Stage I: Denial kicks off with a dark, angsty vibe that continues into The Wounded World, with a catchy gang vocal “we’re all to blame for the wounded world” and a more post-hardcore feel with some gritty screams.

One of the stand-out tracks kicks off Stage II: Anger with The Stigma (Boys Don’t Cry), is also one of the most important tracks on the record as it takes a swipe at the culture of having a stiff upper lip in response to mental health and struggles in the male population. Combining beautiful melodic cleans and angsty shouts, while The Handwritten Letter has a lighter feel in the chorus and channels some of the early As It Is pop-punk vibes. The tide turns for The Question, The Answer with a deep ballad that live, would lead to a massive sing-a-long and probably a lot of tears.

We enter Stage III: Bargaining with The Reaper and guest vocals from Underoath’s Aaron Gillespie. The Truth I’ll Never Tell closes stage III with an extremely relatable track that retains the early As It Is vibes, with light, upbeat instrumentation to back the deep lyrics. The Hurt, The Hope is a staple of Stage IV: Acceptance, which closes with the aptly titled The End, rounding the album off with an honest hit out at the culture of people telling those suffering to speak up, yet not listening, a track that brought on a more profound meaning during the writing process after the tragic loss of Linkin Park’s Chester Bennington.

This is a bold and very well created record that fully takes you on a journey both within the lyrics and the instrumentation that back them up. Anyone who has or still does suffer with mental health issues will relate fully to the journey The Great Depression takes you on. While the focus of the build-up to the release of the record has been on the lyrical content, the way that As It Is have crafted such a layered and immersive record must not go unnoticed. While heavier and in a very different direction to their first two records, The Great Depression is definitely the quartet’s best work yet.