The video is for the beautiful track, ‘Sundress’, and was created with footage from a selection of their most recent tour’s in the US, and captures this high-octane band getting into all sorts of mischief before, during and after their shows! 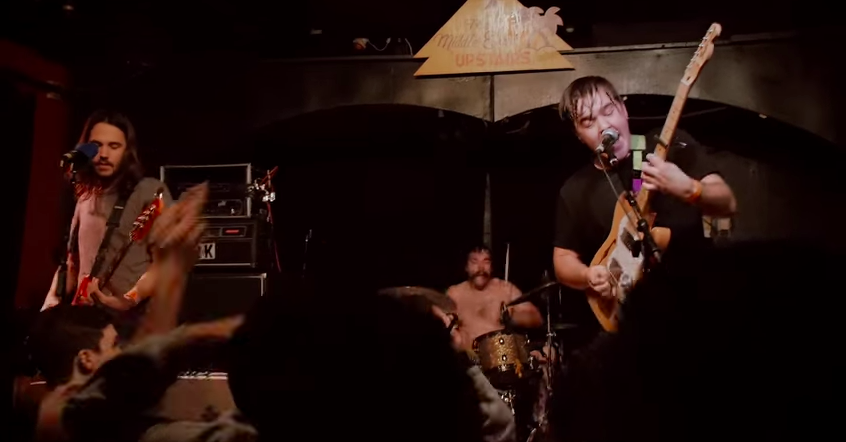 Hailing from Benson, Minnesota, alt-rock, family band, Tiny Moving Parts, have just released a brand new video from their most recent output, ‘Pleasant Living’. The band is made up of Dylan Matthesien and his two cousin’s, Matt & Billy Chevalier, who created this band over their years of growing up together, having fun and playing music!

The video is for the beautiful track, ‘Sundress’, and was created with footage from a selection of their most recent tour’s in the US, and captures this high-octane band getting into all sorts of mischief before, during and after their shows!

There’s no frills to this tour video – and everyones a fan of Beavis and Butthead in the van, right! Dylan Mattheisen, (Vocals/Guitar), comments; “We are so hyped to have this video out! It does a great job of showing what it’s like to be on tour. Playing fun shows, making new friends and partying. Having fun is fun! “

Their latest record, ‘Pleasant Living’, was released on October 27th ’15 via Triple Crown Records.
From the youthful exuberance and frenetic drum work on the opening ‘Sundress’ to the purposefully suppressed yet intense closer ‘Van Beers,’ it’s apparent from first listen that Tiny Moving Parts knew exactly what they wanted to do with ‘Pleasant Living’. And with the help of producer extraordinaire J. Robbins, they were able to get right down to it in a fashion that excels their sophomore status, entering the realm of veteran pomp. ‘Pleasant Living’ isn’t afraid to belt you with its power, it isn’t apologetic about being in your face–and neither are the lively personas behind the band.

“I think we’ve found a happy balance here,” Mattheisen says of his band’s follow-up to 2013’s This Couch Is Long And Full Of Friendship (Kind Of Like Records). “It’s mathy, it’s complex, it’s thought-out, but there’s still an element of having fun sing-along songs in there. We really can’t wait for people to hear the album.”

Lead single ‘Always Focused’ defines the dynamic Mattheisen speaks of, with a noodly guitar riff and cries of, ‘I let myself down when I beat myself up.’ He says it’s a song about worrying: “Even though I overthink everything, I wouldn’t have it any other way.” You can check this out here!