Junior’s pop-punk conceptual release JuniorLand is out now. The trio include a professional wrestler, a childrens author and the head of a non-profit organisation and the release is partly reminiscent to the mighty Blink-182’s self-titled 2003 release. 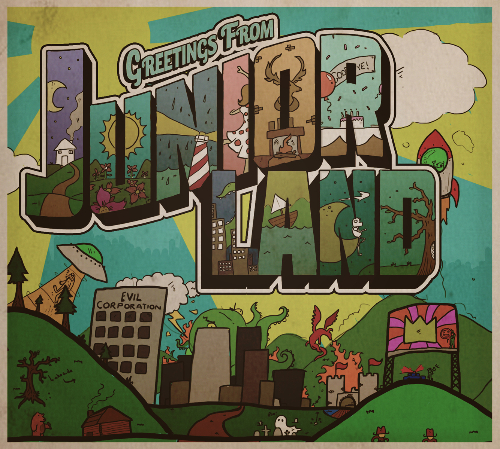 Junior‘s pop-punk conceptual release JuniorLand is out now. The trio include a professional wrestler, a childrens author and the head of a non-profit organisation and the release is partly reminiscent to the mighty Blink-182’s self-titled 2003 release.

Guitarist/vocalist Matt Attard says of the release: “We all liked the idea of a concept album, and building our own little world that’s explained and explored through each of the songs.”

JuniorLand is full of layered vocals from both Matt and bassist Mark Andrews, highly melodic and riff-heavenly, its a release that you want to get your hands on!

Junior are compromised of a professional wrestler, a children’s book author and the head of a non-profit organisation. In addition, they face a bit of a geographical hurdle, with bassist Andrews residing in the US ever since securing a contract with professional wrestling company, TNA (Total Nonstop Action): “Every kid wants to be a Power Ranger, and so I figured being a wrestler is the next best thing,” laughs Andrews; “I started when I was pretty young, and I’ve just been changing, learning, growing, developing and pushing myself ever since. So it’s awesome that it’s recently allowed me onto an even higher level to be pushing myself at, ever since winning British Bootcamp and securing my contract with TNA.” But don’t think that’d stop them hitting the road, you can catch the trio on their 2nd UK tour this November: