The music world has been saddened by the death of Motorhead vocalist and bassist Lemmy. The frontman sadly died on the 29th December 2015 age 70 after a short battle with cancer of which he was diagnosed on Boxing Day. 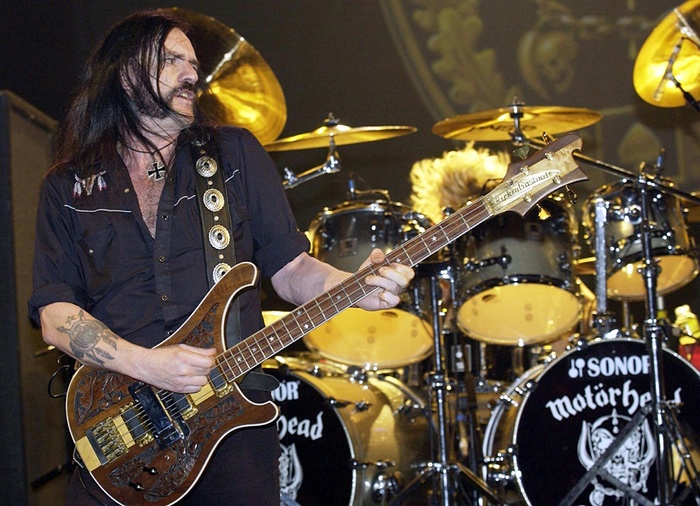 The music world has been saddened by the death of Motorhead vocalist and bassist Lemmy. The frontman sadly died on the 29th December 2015 age 70 after a short battle with cancer of which he was diagnosed on Boxing Day.

“There is no easy way to say this … our mighty, noble friend Lemmy passed away today after a short battle with an extremely aggressive cancer. He had learned of the disease on 26 December, and was at home, sitting in front of his favourite video game from The Rainbow which had recently made it’s way down the street, with his family.

“We cannot begin to express our shock and sadness; there aren’t words.

“We will say more in the coming days, but for now, please … play Motörhead loud, play Hawkwind loud, play Lemmy’s music LOUD. Have a drink or few.

“Celebrate the LIFE this lovely, wonderful man celebrated so vibrantly himself.

“HE WOULD WANT EXACTLY THAT.”

Lemmy became world famous as one of rock’s biggest hell-raisers fronting one of metal’s greatest bands Motorhead since 1975 alongside …………….

His bass style combined heavily distorted chords and at times, resembled rhythm guitar and inspired many of today’s metal frontrunners including the likes of Metallica. The band’s distinctive 1950’s era rock’n’roll and phet-fuelled tempo combined to give the band a unique and genre-leading sound.

Born Ian Fraser Kilmister on Christmas Eve 1945 in Stoke-On-Trent, he lived a relatively solitary existence during his youth as an only child in Stoke and later in North Wales, where his infamous Lemmy nickname was derived by locals. His army chaplain father left the family when he was young, leading to a very close relationship with his mother and to an enjoyment of womens company.

He worked as a horsebreeder and on a factory assembly line after leaving school until he picked up a guitar and moved to London. When working as a roadie for the legendary Jimi Hendrix during the 1960s and 70s, he downed copious quantities of LSD and continued during his time with the band Hawkwind, explaining that the hallucinogens made him more tolerant. His drug use continued into the early days of Motorhead in order to battle exhaustion due to the bands excessive touring into the 1980s, however diabetes and hypertension caused him to restrict his drug use from the following decade but he still continued to drink and smoke even after his 2013 heart operation.

Motorhead came about following his sacking from Hawkwind following arrest for drug possession on the Canadian border in 1975, where he then teamed up with guitarist Larry Wallis and drummer Lucas Fox to create the band that would go on to be one of the most recognisable in the world. The most successful era of the band was unarguably between 1979 and 1983 where Lemmy was joined by guitarist Eddie ‘Fast’ Clarke and drummer Phil ‘Philthy’ Taylor with their live album No Sleep ‘til Hammersmith reaching number 1 in the UK charts. Despite the numerous line-up changes Lemmy remained as the only original member and kept the band running. The current line-up featuring drummer Mikkey Dee and guitarist Phil Campbell is the longest serving line-up of 20 years touring and recording without a break.

Lemmy’s views on the world provided the basis of many an album with notable mentions to 1979’s Overkill and 1982’s Iron Fist, he never shied away from focusing on topics that interested or riled him, with songs such as Don’t Let Daddy Kiss Me and Get Back In Line addressing child abuse and war respectively. These tracks accompanied the typical rock’n’roll debauchery filled tracks like Born To Raise Hell, Ace Of Spades and hatred of authority in Eat the Rich.

His 2002 autobiography White Line Fever and 2010 documentary saw the frontman express his views on issues that not only interested him but also irritated him and interviews saw him regularly talk about political and social issues and his disdain on the way mankind would turn out; “The world’s going to end up with everybody sitting in their room punching keyboards”, a comment that sadly looks like it is going to be coming true sooner rather than later. Ever the philosophic and compassionate kind, he had an unusual and highly controversial hobby in collecting Third Reich memorabilia, stemming from his interest in historical periods, saying of people’s distate; “By collecting Nazi memorabilia, it doesn’t mean I’m a fascist, or a skinhead. I just liked the clobber. I’ve always liked a good uniform, and throughout history, it’s always been the bad guys who dressed the best: Napoleon, the Confederates, the Nazis.”

Despite his drug use, he had a severe hatred for heroin and explained his reasons for never marrying was that the love of his life Susan Bennett had died of a heroin overdose aged just 19.

He is survived by son Paul, who he was reunited with decades after separation but whom he loved dearly. Despite working his way through hundreds of one-night stands, he adored and respected women.