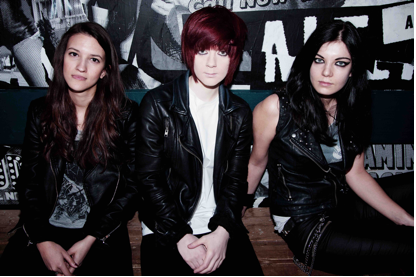 Blasting straight into 2016 comes Bristol three-piece IDestroy, mixing teenage rock’n’roll rebellion with riot grrrl sensibilities, bubblegum pop melodies and a whole heap of sneering, yet charming attitude. Their debut EP, ‘Vanity Loves Me’, is released on February 26th and leads from the off with the infectiously bratty title track.

Perfectly formed at two minutes and eighteen seconds, ‘Vanity Loves Me’ is a sizzling introduction to IDestroy. With nods to the punk-edged sounds of Sleater Kinney and The Stooges, the track features huge guitar riffs, prowling basslines and insistent drums, topped off with gloriously feisty vocals from singer/guitarist Bec Jevons.