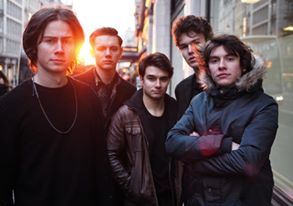 ‘FlashFires follow up their twice-released debut ‘Circus Boy’ with a bona fide second single, ‘Shy’. It’s a bold and choppy burst of groove-driven post-punk / indie that evokes bands that follow the trajectory from Orange Juice through Franz Ferdinand and suggests FlashFires themselves are anything but. Nifty and hooky as hell, ‘Shy’ has ‘breakthrough’ written all over it’
-Whisperinandhollerin

“Their music is fast paced, with a funky twist and a surge of energy. They have a great stage presence and they know how to captivate their audiences with jangly guitars, unique vocals, catchy beats and a most definitely fun experience…”
-The Edge

Friends from school, FlashFires have a unique bond that shines through in their song writing and their live shows. They are writing fabulous tunes that belie their youth and sitting somewhere on the indie/rock spectrum, their own self-proclaimed brand of Fire Indie Disco is out there for all to have a good time! Unrestricted by genre, the band are all music fans with eclectic tastes and are not frightened to take risks and test out different styles and sounds in their compositions.

Already with big US & UK management behind them, FlashFires can also count Led Zepplin’s Jimmy Page amongst their rapidly growing legion of fans after he popped along to see one of their London shows.

‘Play’ is available to pre-order from: http://angrybadgerrecords.bigcartel.com/