Five Bands Who Are Proving Punk Is Not Dead

Sick of hearing about 5 Seconds Of Summer and Neck Deep? Longing for something to reignite that you thought died so many years back? Fear not – we’re here to help. 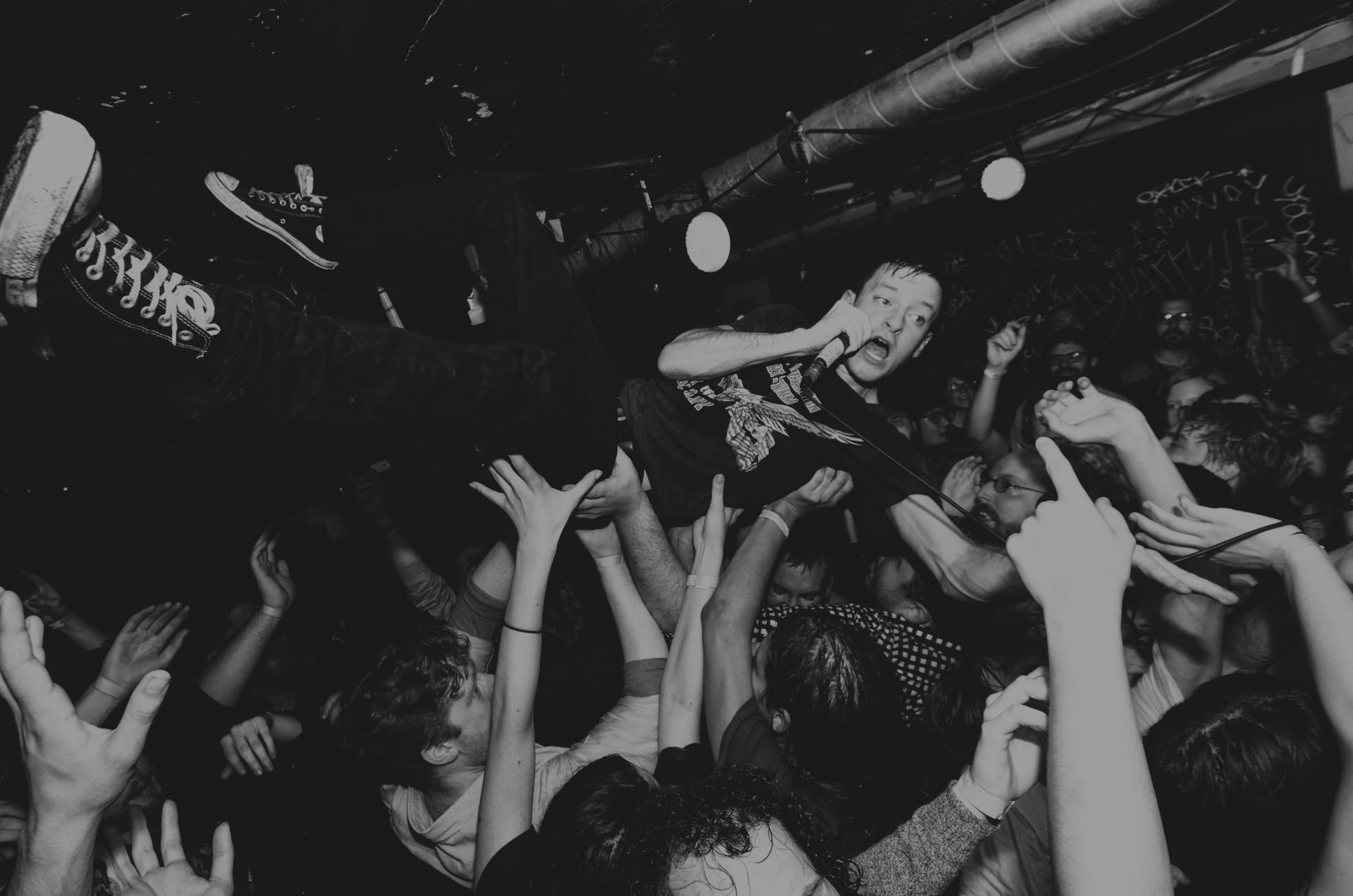 It’s easy to see the punk scene as stagnant right now – when the second wave of pop punk is producing acts left, right and centre that sound like cheap New Found Glory knock-offs, or Five Seconds Of Summer are held up without irony as an example of successful punk, the temptation to start eulogising the genre is strong. But people have been calling time of death on punk since 1978, and in truth nothing has changed since then.

Which is to say, there’s no way that punk is dead. You just need to know where to look.

The first band that comes out my mouth whenever I’m asked for good new punk is PUP (Pathetic Use of Potential), a Canadian four piece that have found such a perfect balance between melodic punk with hardcore influences, and messy ‘90s skate punk that discovering them feels more like a revelation than anything else.

Reservoir, their debut single, is one of the most flawless punk songs I can think of – fast, furious, and musically tight at all moments. It’s the best introduction to the group, though considering their debut LP is only 10 tracks long, it’s well worth just diving straight into that. You won’t regret it.

I discovered PUP through Fidlar – but it’s PUP that have stayed with me. Fidlar’s Cocaine and Cheap Beer are fantastic tunes, but they fall short with different styles. PUP’s debut isn’t full of tracks like Reservoir. There are a few similar ones, but when PUP veer towards the melodic side of their hardcore mix, it still works fantastically, betraying not just a group of passionate young punks, but of deeply talented songwriters. Really, what else could you ask for?

I may have dissed second wave pop punk, but there are some fantastic bands within it – even if the best is The Story So Far, acts like Such Gold and new UK group Light Fire Down are creating pop punk on a level not seen since the ‘90s. For TSSF and Such Gold, as well as groups like Four Year Strong, the secret to progressing the genre isn’t to keep diluting the punk until the overwhelming aftertaste is just pop, but looking back to ‘80s hardcore to create a musical blend that can be amazing.

The Story So Far are making this list not because they are the most successful pop punk band around at the moment – there are several contenders for that title, not least Neck Deep, whose latest album made the UK Top 10, whether or not it was deserved – but because in eight short years, they’ve become such an influential force within the genre that they’re beginning to replace New Found Glory as the sound so frantically aped by so many others.

Fans of pop punk will almost definitely know TSSF – but three albums deep, they’re still a great recommendation to anyone who prefers their punk to hit a bit harder than most pop punk, which is so often such a watered down, anaemic version of punk that it’s easy to dismiss the genre. TSSF’s sheer musicality, along with their hardcore influences, place them at the top of any list of great modern pop punk, and rightly so.

Until writing this, I hadn’t realised that Slaves, my latest discovery, toured the UK with PUP in 2014. It’s a tour that could only have been fantastic – not just down to the strength of PUP, but the utterly different garage-grime punk sound that Slaves have created is, to my ears, unique. And in a word, stunning. Even more so when you consider that a two-piece group creating riffy jams can so easily fall short of its potential – after listening to Royal Blood’s debut, I’m always on edge around acts like Slaves.

There are two albums to sink your teeth into here – their debut, Sugar Coated Bitter Truth, and this year’s ‘official’ debut, Are You Satisfied? For my money, it’s worth starting with the second – even more specifically, in an album chock full of bangers, Cheer Up London and Sockets are two amazing tunes, and a great introduction to the group.

Honourable mention has to go to another couple of upcoming UK garage punkers: Sauna Youth – if you like Sockets, you will like their debut LP, Distractions; and The St. Pierre Snake Invasion, whose debut album is released on Hallowe’en and brings a similar level of grimey slickness that Slaves deliver so flawlessly.

Where would a list of fantastic punk bands be without some solid hardcore? None come more solid than German group Earl Grey. With just a single EP to their name, and another releasing October 9th (I’ve listened to it, I’ve reviewed it, and it’s an absolute banger), they’ve already managed to get a decent UK following built up.

Earl Grey are best described as ‘melodic hardcore’, a term so loose that even PUP, whose influences are far more on the skate side, find themselves branded with it. However, both groups have created such a distinct sound within that label that neither sound too alike. Earl Grey certainly focus on the hardcore in comparison to PUP’s melodic bent, but still bring their own melodies to it – impressive, considering the vocals are pure hardcore shouting. They’ve been called pop punk before, but truthfully while those influences are there (some of their guitar work could come straight out of a TSSF song), it’s impossible to divorce them from the hardcore sound and energy that drives everything along so well.

It’s hard for me to suggest an introduction to Earl Grey at this point, purely because their upcoming EP is so good that I would instantly send anyone asking that way. It’s always an impressive feat when you actually manage to create a collection of four songs that are both unified by sound and style, and still totally varied. Not that Ready To Leave, their debut, is at all bad – it’s still a fantastic hardcore EP, and well worth a listen. But if you end up liking it, then picking up Passing Time in October wouldn’t be a bad idea.

There are so many bands that deserve to make this list, and I’ve done my best to mention them, but variety is the spice of punk – there should be something for everyone here. With that in mind, one area which has had some truly amazing offerings recently is the post-hardcore scene, where emo got its start. Touché Amoré, Title Fight, Milk Teeth – all of these cover such a wide range within the spectrum from emo, to post-hardcore, to grunge that a firm believer in the potential of this scene to produce some wonderful things.

The Sinking Feeling, then, are one of these wonderful things. With two EPs to their name, debut Old Friends and last year’s Ugly, the Glasgow three-piece are producing some truly haunting stuff, while keeping that solid punk base to everything. Fans of Title Fight’s superb Floral Green will hear strong influences of it in Ugly – opener Hollow brings the exact dark melodic twist to proper hardcore beats that Title Fight did so well in tracks like Secret Society.

Unless you’re already a post-hardcore fan, start with Ugly – while there is some fantastic stuff going on in Old Friends, Ugly hits harder and faster, and is undoubtedly the punkier of the two. It’s an interesting dynamic, as usually bands move away from being punky, not towards, but it feels like a natural progression for these guys, a way of pushing their music to another level. Yet another artist to keep an eye on.

So there it is. Punk has always been a genre filled with shit to wade through, like every other genre in musical history, but it’s also been one that has been able to consistently evolve and produce amazing things regardless of what year it is. Punk won’t ever truly die. It just rotates out of vogue.