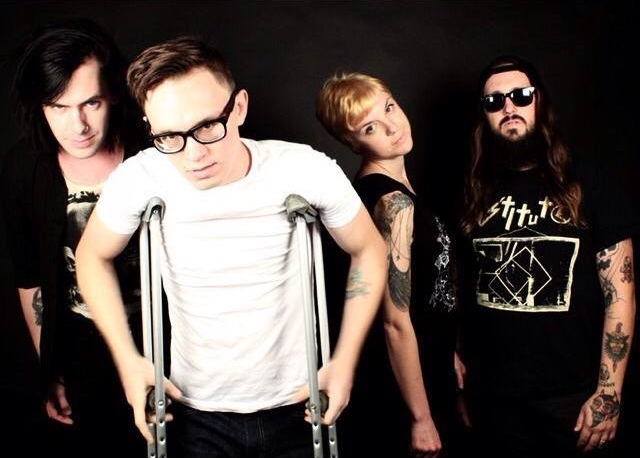 After releasing two albums with No Idea and countless miles logged on the road (including dates with Dinosaur Jr, Against Me!, Best Coast, Kurt Vile and many more), Philadelphia’s Creepoid have signed to Collect Records to release their third full length. Entitled Cemetery Highrise Slum, the album finds them refining the sound of their early LPs and distilling it into what is undoubtedly their finest and most accessible release to date. The album was produced and mixed by Peter Mavrogeorgis (The National, Sharon Van Etten) at Dollhouse Studios in Savannah, GA and is set to be released on June 22nd.

To coincide with the announcement, the band is sharing Cemetery Highrise Slum opener American Smile, a two and a half minute affair that perfectly encapsulates the line the band walks between shoegaze gloom and college radio-ready hooks. Speaking about the song, Creepoid’s Sean Miller said, “it references many of the over-arching themes of the album: our own tenuous mortality, our personal struggles and our individual shortcomings as human beings. Its chorus contains the words ‘cemetery highrise slum’; we chose that phrase for the title of our album because we felt it best encapsulates how we see our own abject reality.”

After a handful of dates with Against Me! earlier in the year, the band are currently out on the road with A Place To Bury Strangers, which takes them out to the West Coast before they make an appearance at SXSW in Austin, TX.

Following these US dates, Creepoid are set to make their UK debut at The Great Escape festival, followed by a run of club shows.

Catch the band on the following dates…