Unless you’ve been living under a rock for the duration of 2015, you will be very aware of the quick ascent of Southampton goth-punks Creeper into the hearts of just about everyone who has encountered them in any form. 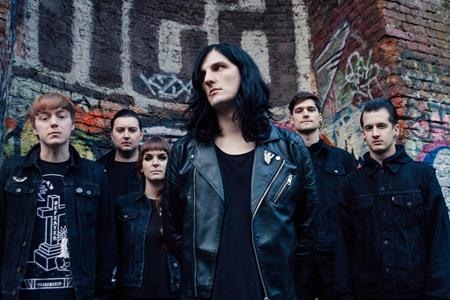 Unless you’ve been living under a rock for the duration of 2015, you will be very aware of the quick ascent of Southampton goth-punks Creeper into the hearts of just about everyone who has encountered them in any form. The last couple of months have seen the band slip into the shadows and take a break from their heavy touring schedule before they embark on UK and mainland European dates with Neck Deep and embark on their first headline run.

Now with the announcements of a line-up change (guitarist Sina Nemati leaving to focus on his sound engineering career, being replaced by Ollie Burdett and live keyboardist Hannah Greenwood joining on a permanent basis) and the announcement of new EP The Stranger to be released on February 19 via RoadRunner Records, the band have revealed the first track to be taken from the forthcoming release; Black Mass.

The track, premiered on Daniel P Carter’s Radio 1 Rock Show last night (January 10) to extremely high appraisal, in fact, the appraisal was so high, Daniel even played it TWICE within a short period on the show! If you missed it, or just want to hear the incredible track again, you can listen here:

Vocalist Will Gould says of the track; “The lyrics are written from the perspective of the character of The Stranger, the heartbroken monster who is the EP’s namesake. They’re partly inspired by recounts of sleep paralysis, where sufferers describe seeing a ‘black matter’ or ‘black mass’ haunting them in their rooms at night, while they lie paralysed in bed.”

The band have announced their first London headline show of the year as part of their headline tour at the Barfly in Camden on March 3.