Can Gothic Rock Take Over the World?

Elizabeth Birt looks at the rise of Gothic Rock and why it is taking over the music world! 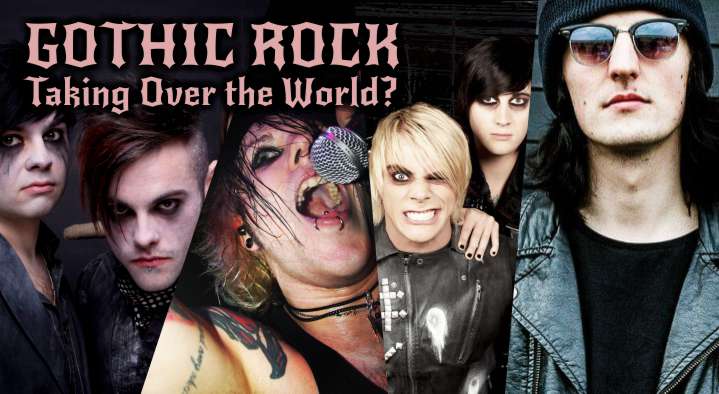 So Gothic music is on the rise. What do you mean by gothic music? I hear you ask, well let me tell you. Goth rock is a sub-genre (yep we’re into sub-genres now) of alt-rock and punk and was originally popular in the 1970s with British bands such as Joy Division, The Velvet Underground and The Cure and is typically dark themed lyrics and atmosphere.

Fast-forward a few decades and we’re onto the new breed of Goth bands. For a genre that was started in the UK, the Americans were the ones to bring the new breed to the forefront with acts such as Marilyn Manson, Wednesday13 and Evanescence leading the way and inspiring a new generation.

So who comes under the banner of goth rock? Well the new wave of bands have been split into a further sub-genre of New Grave or just generally call themselves alt-rock bands. Bands under the New Grave genre include British acts Ashestoangels, Solace in Nightmares, The Dead Xiii, Miss Vincent, The Acid Ballet and American giants such as New Years Day and Farewell My Love. There are also the gothic bands who instead come under alt-rock or gothic punk and these include the rising stars of Fearless Vampire Killers and Creeper.

Why is it that this sub-culture genre is taking the music world by storm? Well let’s find out and who better to ask than people who spend their time listening to and promoting the sub-genre themselves?

“It’s filling the gap left by both the departure of My Chemical Romance and other ‘alternative’ bands who’ve adapted their sound for popularity and are no longer distinguishable from the other stuff we hear on the radio every freaking day” – Rhee Feehan.

“It’s also kids are sick of the mass produced crap that comes from the Cowell factory. It also has that feeling of belonging to a fan base that doesn’t care about if you are wearing the latest brand of clothing” – Genien Blackwood.

“Goth rock is taking over because everyone comes for the music and stays for the sense of community that is natural In this genre,it’s still got all the musical credibility of normal rock but this rock’s dressed in black and will give you a musical hug.” – Parice White.

“I think goth rock is taking over because it’s not just a genre but a community. It is something that stands for and appeals to all the odd balls and the ones who are tagged as freaks from so called normal society. People within the community are creative, imaginative and think outside of the lines of normality. As individuals we are detached from the commercial world where supermodels and pop stars rule the roost but through love of music and the beauty of all things dark we have found a community, almost like one big family and we stand together and by each other, accepting everyone despite race, religion, gender and sexuality more than any other social group you will ever come across.” – Jake Herring.

“After fading into the background of rock in the past few years, goth rock has recently experienced a revival. This could be down to the attraction of the theatricality involved in it’s image but also to the diversity of the genre itself – it has continually evolved since its earlier roots in bands such as The Doors and The Cure and it’s influence manifests itself in other areas such as film and fashion. Goth rock is a complete alternative to the usual popular music and so holds great appeal to those that feel they do not fit in either – this has led to the creation of tightly knit band fanbases whose support has forced the genre back into the spotlight.” – Bethan Adams.

“Goth rock is taking over because it’s giving the kids who would otherwise wouldn’t have anywhere, somewhere to belong, a community of people who like the same things, and I think that’s great. With goth rock becoming more widely accepted, more people embrace it and get inspired to start their own bands. More people feel free to express themselves and this whole new wave of music means there is a sound for everyone.” – Shannon Barrone.

From my experiences in the goth rock genre, it’s more than just about the music for both the artists and the fans. It is all about creating a community where fans can meet like-minded people, talk about problems or experiences whether they be small problems such as ‘what to wear to a party’ or bigger problems/confusions including sexuality and gender in a place where they know they won’t be judged and can either get the support they need or be able to support someone going through something similar to themselves.

Also there is more of a community feel as the artists are all heavily involved in their projects (a real DIY feel) with many not having management and who do everything themselves from writing their own press releases, booking their own shows with some even self-funding their albums or EPs (although this is common in the alternative music scene) and constantly interact with their fans on decisions such as where to play, who to have on the bill. An example of this is the recent smash hit of the British Horror Story Tour which alongside being a great showcase for the new generation of goth bands, was self-booked, organised and publicised by the band.

The popularity is also increased as the legions of fans are quick to support a new band, forming an enlarged community and spend hours each day promoting the artists via any form of social media they can, this gathering more exposure and therefore more fans. The fans find any way they can to help their favourite artists, an example of this is the recent fan-made project started by Sarah White #FVKWARPEDTOURUSA2016 which is aiming to get Fearless Vampire Killers on the bill for next year’s mammoth USA tour. What’s surprising about this? Well it is started by one of the British fans who not only wants to see her favourite band grow but also to help out the American fans of the band who have never seen them live, showing more of the community feel which the band have also shaped by creating the Obsidian Bond, a network where fans pay a small membership fee and have their own private forum where they can chat to other fans from across the world and get exclusives including podcasts, lyric sheets, guitar chords to the entire back catalogue. Now for a fee, you may be thinking that it’s unfair on the fans who dedicate their time and money by buying tickets and merchandise but you have to remember that DIY bands need funding to be able to continue.

Okay enough about how the fans help raise the popularity, what about the actual music? What makes the music so special that hordes of people feel the need to listen to and promote it? Well it’s like a haven and an alternate little world from the day-to-day lives. The dark and broody lyrics are some of the most relatable, drawing comparisons to the lives of everyday people and the dirty riffs and high bass line creates music for any mood and the vocals usually relayed in a haunting manner. There’s also the theatricality of the live shows with the makeup clad members running around the stage and the artistry that comes alongside, whether it be album artworks, books, poems that come from or are inspired by lyrics, there’s plenty of ways to let your artistic flair out. Where most artists these days have album covers that just display their name, the majority of gothic bands go all out with intricately detailed artwork and even stories connecting to the music!

So with the community feel and music for any mood, its little wonder that these gothic bands are creating a new wave of the genre and it is safe to say that with the relationships with the fan bases, they are here to stay.