The band have launched their first ever online Bowling for Soup Karaoke contest! So if you fancy doing what you love aka singing along to your favourite pop-punkers and then win some cool prizes for it… then let frontman Jaret explain! 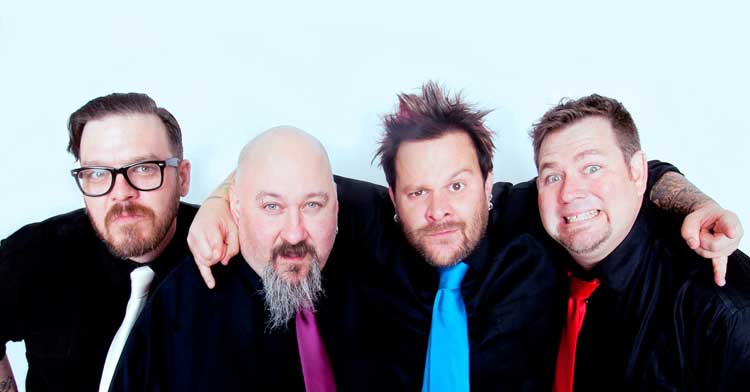 As everyone knows, those pop-punk kings Bowling for Soup are probably one of the most fun bands out there. And the fun doesn’t stop. With sing-a-longs to the bands hits ever popular whether at shows or just randomly (admit it, we’ve all done it), the band have launched their first ever online Bowling for Soup Karaoke contest! So if you fancy doing what you love aka singing along to your favourite pop-punkers and then win some cool prizes for it… then let frontman Jaret explain:

1. Set your camera up and press record as you sing along to a BFS song of your choice.
(You can either sing along karaoke style or lip sync.)
2. Make it fun! Use props if you want to.
3. Download THIS SHORT VIDEO and add it to the end of your video.
4. Upload your video to YouTube with the title “BFS Karaoke – [insert song title] by [insert your name]”.
(Be sure to use the following Tags: BFSkaraoke, Bowling For Soup, Karaoke, BowlingForSoup)
5. Don’t forget to post it on Twitter too! Include @bfsrocks, #BFSkaraoke, and your YouTube link.

Head to http://www.bowlingforsoup.com/videocontest/ to view all the entries in BFS Karaoke. Your video will move up the list below as it gets more views. The more comical, outrageous, and hilarious you make it, the more views you’ll get, which will push you closer to the top.
The video with the most views at the end of the contest will win the grand prize of dinner backstage with us!

What are the prizes you say? Well there’s some pretty kick ass things on offer, including dinner with the band backstage at a show of your choice on Bowling For Soup’s forthcoming UK tour, as well as a signed guitar and lots of other goodies. Full list of prizes is as follows:

GRAND PRIZE
Dinner with the band backstage at a show of your choice during the February 2016 How About Another Round Tour + Autographed Guitar (Must live in the United Kingdom. Does not include ticket to the show, you must provide own transportation, etc. Time of dinner is to be determined.)

2nd Place
Autographed Guitar
Video message from the band
(Must live in the United Kingdom.)

So brush up on the lyrics to the likes of Almost, The Bitch Song, High School Never Ends and of course 1985 and get filming some videos!

Also to add to the fun, the band are releasing lyric videos for some of the tracks from their Greatest Hits album Songs People Actually Liked  -Volume One – The First Ten Years 1994 to 2003. The first to be released is Cody