Now, we all know that it is going to be a fantastic weekend but, we thought that we would help you out solving the ‘Who Should I See’ conundrum by providing you a ‘Bands You Need To See’ at 2000 Trees guide. Here is our PART TWO! 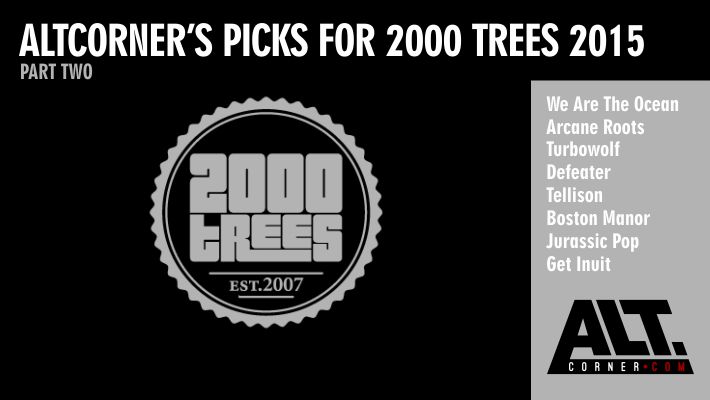 We are delighted to say that we shall be doing press coverage at 2000 Trees 2015; the Multi-Award winning music festival in the Cotswold Hills. The festival’s ethos of supporting upcoming and underground music for both the artists and the fans fit perfectly with the mission and purpose of AltCorner.
Now, we all know that it is going to be a fantastic weekend but, we thought that we would help you out solving the ‘Who Should I See’ conundrum by providing you a ‘Bands You Need To See’ at 2000 Trees guide. This will be in three parts so buckle up, part one is here and this is part two…

We Are The Ocean

Four-piece rockers from Essex, We Are The Ocean have established themselves as heavyweights amongst British rock. With album ‘Maybe Today, Maybe Tomorrow’ signalling a change in sound and approach to their music following vocalist Dan Brown’s departure. Their live performance has always been renowned for being a real spectacle and with a new album called ‘Ark’ full of critically acclaimed tracks that can be added to their impressive back-catalogue, seeing We Are The Ocean is a must.

Intertwining various genres such as Post-Rock, Math-Rock and Alternative Rock… Arcane Roots sound is eloquent and sublime. Debut album ‘Blood and Chemistry’ built on the success from its predecessor, the EP ‘You Are’ receiving widespread acclaim and saw them go onto play worldwide shows. Growing in stature and popularity, Arcane Roots have the world at their feet as they look towards releasing their second album. 2000 Trees will serve as the perfect setting for a band that will be one of the biggest bands in the UK before long (you can hold us to that!).

Bristol based four-piece Turbowolf have seen a momentous rise to the top since their formation in 2008. They have occupied many stages including Download Festival and Sonisphere, as a well as touring with bands such as Korn and Dimmu Borgir. Turbowolf’s sound has often come under scrutiny due to their combination of psychedelia, metal, electronice and punk rock influences but the culmination of all of these make for a truly unique and intriguing sound. The delivery of their songs live are eccentric and exciting so if you want bucket loads of fun, go see Turbowolf.

Melodic Hardcore heavyweights Defeater craft intricate and conceptual songs that narrate a working class New Jersey family with each album narrating a different family member. Their approach upon the Hardcore genre has been renowned critically both live and on studio releases. If you’re music taste sways towards heavy music or you want to be enchanted by their personal delivery, you know what to do.

Tellison are four-piece from Bethnal Green, London. Their brand of Indie Rock is created upon a shared love of unsuccessful indie bands of the late 90’s and 00’s. Tellison have achieved great success since their formation in 2005 with two albums under their belt that have received widespread praise, a couple of charting singles and a whole host of sold-out shows. Tellison may have been relatively quiet recently as they have been adding the final touches to their upcoming third album but rest assured, their brand of indie rock will be loud and proud at 2000 Trees.

Emo punk rockers Boston Manor are a band that is seemingly everywhere recently. With relentless touring and widespread support from both publications and their peers, Boston Manor is the latest band from their scene to be causing real waves. Their songs are nostalgia-enticing and their polished sound goes a long way in ensuring they stand out from the crowd. So, learn the words and make sure you go and get your punk on with Boston Manor at 2000 Trees.

Perhaps one of the most interesting bands to be playing all weekend is Jurassic Pop. The band is apparently from the land before time and is signed to Fierce Panda Records. Creating conceptual music based around Jurassic Park, most notably about Jeff Goldblum who Jurassic Pop are clearly infatuated with. Their set is certainly going to be fun. Oh and, their guitarist has a Velociraptor’s head.

If you like your pop dirty then you’ll love Get Inuit. The Kent based four-piece deliver a fine slice of indie infused pop that sounds as if Vampire Weekend and Tribes had a love child. Their music is the perfect ode to and for looking forward to summer and their live set will light up 2000 Trees for sure.