Now, we all know that it is going to be a fantastic weekend but, we thought that we would help you out solving the ‘Who Should I See’ conundrum by providing you a ‘Bands You Need To See’ at 2000 Trees guide. Here is our PART THREE! 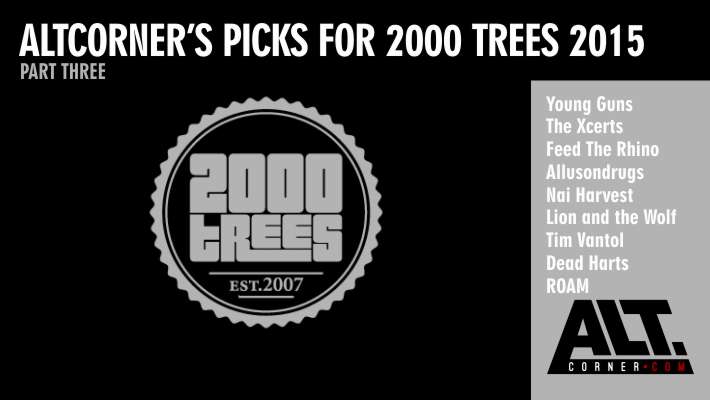 We are delighted to say that we shall be doing press coverage at 2000 Trees 2015; the Multi-Award winning music festival in the Cotswold Hills. The festival’s ethos of supporting upcoming and underground music for both the artists and the fans fit perfectly with the mission and purpose of AltCorner.
Now, we all know that it is going to be a fantastic weekend but, we thought that we would help you out solving the ‘Who Should I See’ conundrum by providing you a ‘Bands You Need To See’ at 2000 Trees guide. This will be in three parts so buckle up; part one is here, part two is here and this is part THREE!

The Alternative Rock five-piece who hail from London have established themselves as one of the biggest rock bands in the UK. With their breakthrough record coming in the form of 2012’s ‘Bones’ that also saw the title-track reach number one on the Billboard Active Rock Chart. Fast forward to 2015 and their third album ‘Ones and Zeros’ was released in June and has gone on to receive countless praise for its ‘danceable direction’. Their back catalogue is filled with real stadium rock-feeling tracks so seeing them at 2000 Trees is a must!

The Xcerts are one of the most criminally underrated bands in recent years. Releasing three studio albums that have all been truly magnificent, the Scottish three-piece mastermind their delivery of indie rock exquisitely on latest album ‘There Is Only You’. With countless crowd favourites such as ‘Home Versus Home’ and ‘Just Go Home’ their set at 2000 Trees will be fantastic.

LOUD! LOUD! LOUD! Is the only adequate way to describe Feed The Rhino. The Kent five-piece will bring their ‘A’ game no doubt and if headbanging and moshing is your scene then Feed The Rhino need to be on your list of bands to see!

Quite possibly one of the most spectacular upcoming bands in the UK right now. Their concoction of psychedelic vibes and grunge undertones fused with catchy hooks and lyrics make for their songs to be some of the most infectious you’ll ever likely to hear. Possessing a party-like stage presence and renowned for quality performances Allusondrugs will be brilliant…even if they should have gone to Uni.

Mesmerizing duo Nai Harvest hail from Sheffield and bucks the trend to create fuzzy punk that has strong influences from a lot of pop artists. The progression the band has made since their formation was clear to hear on new album ‘Hairball’; a release that is perfect for summertime. Their set will be fuzzy, punky and damn right fun so go check them out!

The Lion and the Wolf

The Lion and the Wolf is one of the finest singer/songwriters in the UK at this moment in time. His hauntingly honest lyrics and heartbreakingly beautiful delivery made his debut album ‘Symptoms’ one of our favourite releases of the year. Drawing strong influence from Simon and Garfunkel, The Lion and the Wolf will be playing his misery-inspired in his typical beautiful manner on the Friday.

Folk-Acoustic artist Tim Vantol’s music is designed to be an accompaniment throughout your life. Creating songs about everything from hope and victory to defeat and despair, the singer/songwriter from Hoofddor in the Netherlands is sure to provide the 2000 Trees audience with a fantastic set all about the journey of life that everyone can relate to.

Blending together elements of hardcore, metal and punk with experimental overtones and drawing heavily on their influences, namely Norma Jean, Stray From The Path and The Chariot this Sheffield based four-piece really mean business. The rising stars have already played at festivals such as Slam Dunk, Download and Hit The Deck. Dead Harts are certain to bring a ferocious injection of heaviness to 2000 Trees so if you want your face melted look no further.

The latest band to breakthrough from the Pop Punk scene in the UK, ROAM recently saw their hard-work pay off as they signed to Hopeless Records. The Eastbourne quintet released acclaimed EP ‘Viewpoint’ in January and have seen their popularity escalate all the way to the top of the Pop Punk. So grab a beer and have a dance to one of the finest slices of Pop Punk you’ll hear all year!