2015 sees Ghostfest celebrate its ten year anniversary. The festival that begun back in 2005 has featured bands such as Architects, Bring Me The Horizon and The Devil Wears Prada in recent years and this year’s installment promises to be absolutely incredible. We had a look at the line-up and picked out some artists we think you should really check out… 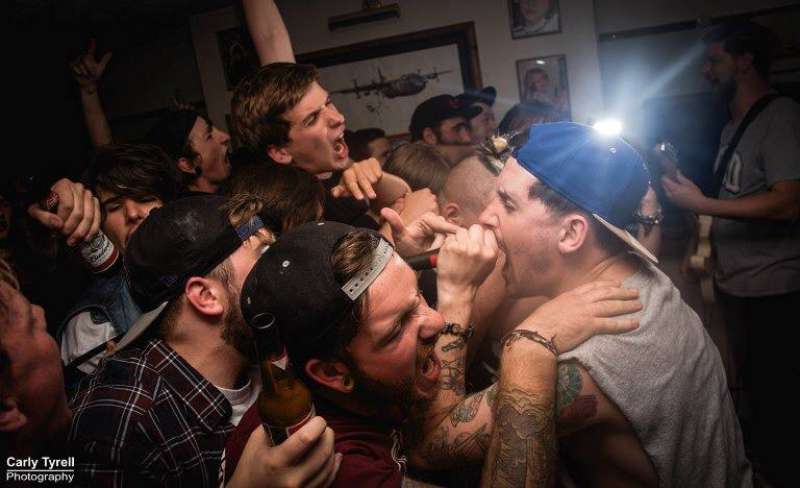 2015 sees Ghostfest celebrate its ten year anniversary. The festival that begun back in 2005 has featured bands such as Architects, Bring Me The Horizon and The Devil Wears Prada in recent years and this year’s installment promises to be absolutely incredible.

Ghostfest 2015 will take place at Leeds University on the Saturday 5th September and at the Bristol Motion on Sunday 6th September with both venues possessing three stages.
We had a look at the line-up and picked out some artists we think you should really check out…

“Play It Loud Fuckers” is the title of a track from Crime In Stereo’s 2004 release ‘Explosives and the Will To Use Them’ and that is indeed what they will be doing when they take to the Ghostfest stage in September. The Long Island based hardcore punks have been around since 2002 and in that time they have released four full-length albums with the most recent being ‘I Was Trying to Describe You to Someone’. Announcing a split in 2010, the future for Crime In Stereo looked very bleak however, an end to that hiatus was announced in 2012 and as the band have picked up where they have left of with some new music apparently in the pipeline, seeing Crime In Stereo play some of their finest slices from their discography should be a must for you.

Baltimore, Maryland is the home of Hardcore breakout stars Turnstile. Their refreshing and honest take on the Hardcore genre has shown them reap applause and generate a large following that led the band to support New Found Glory on their Spring 2015 tour as well as an east coast and west coast tour with Superheaven. With two EP’s and their debut album ‘Nonstop Feeling’ being released this year it’s clear to see this quintet is brimming with potential. Vocalist, Brendan Yates delivery strikes resemblance with Zack De La Rocha(Rage Against The Machine) and Jason Butler (Letlive) with their whole output being a real breath of albeit ferocious air into the hardcore genre.

Devastating Pits, explosive tracks and bone-crushing live performances are just a few things that Malevolence specialises in. Racking up some seriously impressive achievements such as sharing stages with some real heavyweights, Malev have even been a part of their own festival entitled ‘MLVLTD FEST’ which saw them team up with Desolated, Broken Teeth and many more to deliver a truly special occasion for the adoring Manchester crowd. They are sure to bring their ‘A’ game to Ghostfest and are a must watch if you like it loud, rowdy and HEAVY.

Where do we begin with this rowdy lot from Cardiff? For starters some people may find their place on the bill strange seeing as the five-piece are a rap outfit but they have woven themselves among the heaviest bands within the hardcore scene. Offering a unique and accessible take and ethos on rap as a genre, Astroid Boys have shared stages with both rap and metal heavyweights such as Ghetts, Trash Talk, Skindred and Desolated. Trust me these guys put on one hell of a live show and will be sure to really get you (as well as everyone else around you) moving when they take to the stage.

Stray From The Path

I can’t even begin to put into words how excited I am to see the Long Island four-piece at this year’s Ghostfest. I first got recommended them by a friend who lent me a copy of their ‘Anonymous’ album back in 2013 and that album was truly something special. References and similarities with Rage Against The Machine are often cited but that is always meant in the best possible way. Vocalist, Drew York is certainly on the same level as Zack De La Rocha and the band possess the groove to make them really stand out from their peers. If you haven’t listened to them, I highly recommend their ‘Anonymous’ album and don’t even try and tell me that the second ‘Badge and A Bullet’ starts Ghostfest won’t burst into delirium because it will and oh my, will it be good.

Lincoln based melodic hardcore band Blood Youth were born from the remains of Climates who met their demise when Sam Bowden, Matt Powles, Chris Pritchard and Max Dawson parted ways with vocalist Wes Thompson. With a strong desire to maintain their musical relationship and with bold aspirations they wanted to achieve they recruited Kaya Tarsus to occupy the mic and from that point on, Blood Youth was born and they’ve never looked back. With a recent tour with Polar earlier in the year, a headline tour with Trash Boat and an upcoming support slot for Architects on their European dates you certainly would not think this band has only been around for a year. I have now seen them live twice and I have to say, their performance is nothing short of incredible and very, very inspiring. So, make sure you go and check them out at Ghostfest and don’t forget to thank me for finding your new favourite band.

“Creating music and smashing it in people’s faces” is the ethos for Continents and they certainly do excel with it. The South Wales hardcore outfit have gone from strength to strength since their formation in 2010. Releasing ‘Idle Hands’ in 2013, the record was a culmination of all their hard work and by god did they deliver a masterpiece. With devastating vocals that make the hairs on the back of your neck stand up, Continents strive in their creativity as they often follow up their onslaught with tinges of softer, more melodic vocal work that brings you back to earth with a stellar grace. I cannot recommend these guys enough and they simply have to be on your list of bands you need to see.

Do you agree with our choices? If not, tweet us who you can’t wait to see!