Aaaaah Tony Hawk. How many collective hours has it taken from our generation?

Introducing so many of us to punk rock, grunge and hip hop. Extending the knowledge and deepening the love for those of us already inundated.

In recent years the games have taken a serious turn for the worse, in gameplay and soundtrack. I bought Proving Grounds the other day and it was the worst £7 I’ve ever spent. But now the original is back and with it a whole new playlist of songs to carve it up to. But no soundtrack is born perfect and with that I present to you the top 10 tracks that SHOULD have been in the new game’s soundtrack. 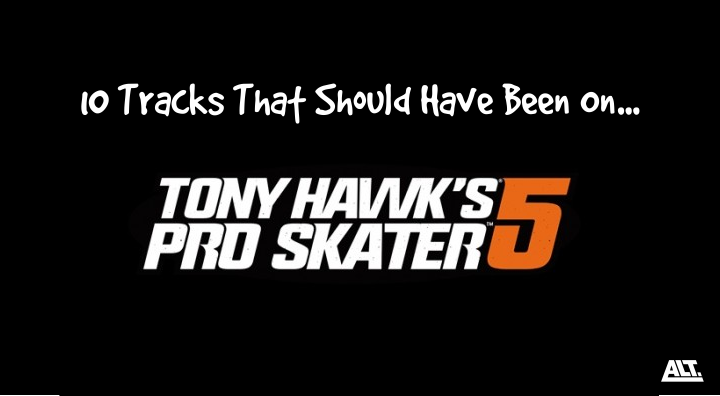 Aaaaah Tony Hawk. How many collective hours has it taken from our generation?

Introducing so many of us to punk rock, grunge and hip hop. Extending the knowledge and deepening the love for those of us already inundated.

In recent years the games have taken a serious turn for the worse, in gameplay and soundtrack. I bought Proving Ground the other day and it was the worst £7 I’ve ever spent. But now the original is back and with it a whole new playlist of songs to carve it up to. Still, no soundtrack is born perfect and with that I present to you the top 10 tracks that SHOULD have been in the new game’s soundtrack.

This list is going to contain a healthy mix of new and old bands, of varying degrees of popularity and notoriety including a few gems of the current British underground. I’m going to try and ride the line of novelty and nostalgia that the game will hopefully set. Because let’s be serious, if not all then most people buying this game will be the people who played them before and want to relive some of those wonderful days on the sofa when you had no idea what the weather, season or time of day way because there was a sick gap or grind that needed hitting and god damn you weren’t going to let it beat you (Unless you were playing Underground 2 in which case there was a shark that needed jumping).

All songs have been vigorously skate sound tested, meaning that I played them alongside skate videos off youtube to see how well they blended with the sounds of skating, fliptricks and grinding.

We kick off with this absolute stonker of a tune from new and upcoming Canada-born punk rockers PUP. Reservoir is the lead single from their 2013 debut self titled album and what a tune it is. When I was tasked with this feature this was the first song that came to mind. You’d be forgiven, expected even, to think this song had come right off a late 90’s early 00’s skate video. These guys are creating quite a stir over the other side of the Atlantic, having been named as one of Rolling Stone’s breakout acts of 2014 and the rest of the album is a brilliant introduction to this new and exiting band.

I’m going to be honest, I don’t much care for rap nowadays, I know there’s much more going on than the Kanye, Minaj, Drake, Iggy Azalea, pop world of it, but the whole style of flow and beat and groove does fuck all for me. I don’t get what the massive appeal of a monotonous 808/sub bass with rigid flow and simple lyrics is. I appreciate the talent in many but like I said, does nothing to me.

Golden age hip-hop is, on the other hand, the music of the gods and one of the greatest things the human race has ever created. High up on the heavenly hip-hop mountain sit A Tribe Called Quest. Legends of the late golden age, their 1991 flagship album – The Low End Theory is never absent from a “greatest albums of all time list”, hip-hop or otherwise, and features some of the best made backing tracks of the sampling era and and some of the most masterful flow and lyrics ever. No debate. Here is the third single from that album, Scenario, additionally notable for featuring the fledgling group Leaders Of The New School, launching the career of the young Busta Rhymes with his famous final verse.

Skateboarding was one of the things that defined 90’s pop culture, breaking out of the underground as a vibrant scene that came up with punk rock’s popularity. 1996’s Sorry, by Nerf Herder – originators of another 90s icon, the Buffy theme tune – is  possibly the nintiesest, most Californian, Californian poppy nineties punk rock song of the 90s California punk pop-rock scene.

Milk Teeth are an exciting new grunge band from Bristol who have a dirty raw sound that comes out in both frantic thrashing grunge and deep brooding post-post punk tinged songs that could have fit in happily in late 80/early 90s Seattle. The lead single Vitamins from new EP Sad Sack would be a fierce addition to the new game’s soundtrack, being one of the best songs in modern grunge and a vastly impressive effort from a band of their current stature. Look out for these guys.

5. The Story So Far – Swords and Pens

In the past few years there has been a sudden surge of a new form of pop-punk band, with deep roots in the hardcore scene – this new blend has really brought a new freshness to pop-punk that has long been devolving into increasingly diluted versions of New Found Glory. Bands like Knuckle Puck, Trash Boat, the decidedly poppier Neck Deep, and the fantastically heavier Title Fight have all been finding transatlantic success recently, but for me there is no better representative of the genre than The Story So Far. One of the earliest proprietors of this new wave. Here we have Swords And Pens, not a single, but one of the best tracks in the fucking fantastic first album, 2011’s Under Soil And Dirt, that features great examples of all the different influences they’ve taken from.

Here we have Dirt Royal, a ballsy young Brighton based punk rock band and a wonderful example of what can happen when British and American influences combine. These guys have taken their strong roots in classic British punk like The Clash and the Damned and mixing them with a deep love of classic sunny American punk rock in the vein of classic Green Day, Goldfinger, and Dude Ranch era Blink. Normally a band like this will sound like a collage, Blink style melodies with Libertines style backing, or a standard Clashalike song with super fast classic California punk drum beat stuck underneath. But in Army Of Dogs from debut EP This Is Now, these guys create a real blend in their songs that though immediately recognisable as English in delivery use their American influences to make a fresh yet pleasingly nostalgic transatlantic sound that would perfectly perfectly slot into a session of carving it up.

Once again, another classic of the golden age of hip-hop, this time we have an early release from two of the founding fathers of the genre, Erik B & Rakim. Giants of the east coast and the young genre in general, Rakim is revered by almost every legendary MC of the 90s, this includes the entire Wu Tang Clan, Ice Cube and Dr. Dre, Snoop Dogg, The Beastie Boys, Public Enemy, Tribe Called Quest; you name it really. All these rappers name him as an idol and invaluable influence. An addition to be proud of in anybody’s music library and fucking perfect for this game.

8. Light Fire Down – Stupid Me, Stupid You

Our final new band, Light Fire Down hail from Weymouth and in my searchings through the multitudes of hundreds of new pop punk bands around Britain never have I found a band that has recaptured the essence and sound of classic late 90’s early 2000’s pop punk, The high point of both the genre and skateboarding in the public eye and mainstream success, and the period of time in which may of us first discovered these two wonderful gifts. You hear these guys and it’s 1999 immediately. On top of this they write awesome songs – all three songs on their latest EP, Piece Of You, are bangers and would fit in this list but here’s the most applicable, a song perfect for the warped tour that I thought was a song off Dude Ranch I’d missed the first time I heard it.

Dinosaur Jr. were massively influential members of the branch of the underground hardcore punk scene of the late 80s that developed into grunge. With lead singer and guitarist J Mascis holding legendary cult status in the early-to-mid-90s alternative scene as a lead guitarist as one of the few accomplished soloists in a power chord and riff heavy time, as well as the title of “guy Kurt Cobain asked to play lead guitar in Nirvana.” Dinosaur Jr have been consistently cracking throughout their long career, with a reputation for being eclectic; they have released album after album of constantly evolving alt-rock, grunge and punk. Here we have On The Way, one of the heavier songs from their most successful though still relatively unknown album – 1996’s Where You Been – and one of the best example of Mascis’ shredding ability and hardcore punk/grunge sound. This is just one of many awesome songs these guys have, but every album is different; I don’t think a fan of any of the wide spectrum of ’90s rock would have to look long to find a song of theirs they didn’t see as a “fucking tune.”

To finish off we have the opening track and third single from the fourth Album from the legendary Beastie Boys, the massively celebrated East Coast hip-hoppers and mostly unknown punk band. In the mid 90’s the band moved from the east coast over to sunny California and moved back onto their own instruments and self production after losing backing from their record company. The two albums coming out of that time, Time For Living and Ill Communication contained a healthy mix of both hip-hop and hardcore punk, one of the first occurrences of the blurring of the lines of the two worlds and the bleeding of hip-hop itself into skating culture. Sure Shot is hip-hop gold – its perfect sampling and beat immediately give you the images of the sun soaked skateparks of all those skate videos you watched when you were 11. It is the perfect addition to any skating game soundtrack.

And there we have it. My “Ten Songs that should have been in the new Tony Hawk’s Soundtrack”.