Self-proclaimed ‘theatricore’ quartet Ice Nine Kills took a break from their AltPress Hell in the Hallways US tour to finally grace the UK and Europe with their Hostel Takeover Tour. We caught up with bassist Justin Morrow to talk the UK run, the thought process behind Every Trick in the Book and how on Earth they plan to top such an insane record. 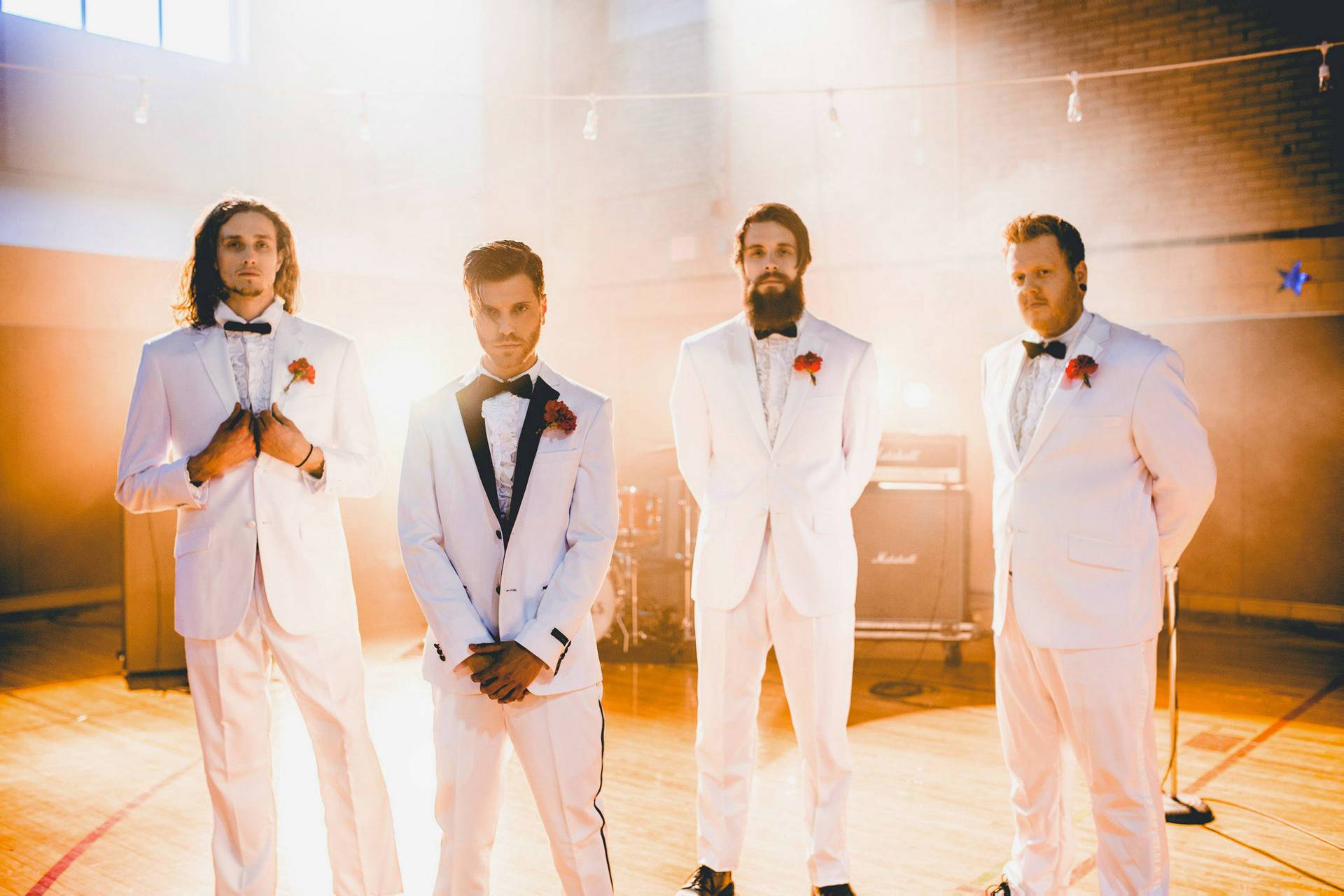 Self-proclaimed ‘theatricore’ quartet Ice Nine Kills took a break from their AltPress Hell in the Hallways US tour to finally grace the UK and Europe with their Hostel Takeover Tour. We caught up with bassist Justin Morrow to talk the UK run, the thought process behind Every Trick in the Book and how on Earth they plan to top such an insane record.

This is your first time in the UK, how has it been for you so far?

It’s been cool. It’s been better than we thought. The first two or three shows were really good, last night (Bristol) was okay. I mean we didn’t know what to expect, like you said we’ve never been here, especially coming over headlining when it’s your first time here is risky but we’ve always done things like that. We’ve headlined a lot in the states when we were smaller and kind of built our way up to where we are now and that’s kind of our plan here but it’s almost like starting over in a sense, like in a whole new place. We are here where we were maybe two years ago in the states. It’s exciting, it’s a whole new market for us to build and expand on. It’s been fun, we haven’t had a lot of time to look around or anything. We went to Cardiff Castle today, that’s cool. I like it here so far, it’s been cool.

That’s good. Your fan base has been building over here for quite some time now, how did it take so long to come over?

I think some people sometimes don’t necessarily think about the logistics of it. Just getting it all planned and figured out is a whole thing by itself. Also money, it’s very expensive and we’ve tried to come over a few times in the past couple of years and it just never seemed to gather for whatever reason. Finally we were asked if we wanted to do it and we weren’t sure if we wanted to do it or not because we didn’t know about if we wanted to headline the first time but we said you know what it’s ben long enough, let’s just go over there and do it. We wanted to get over here on this album cycle so we just kinda went for it and I know there are people who have been yelling at us for years about coming here so hopefully they get to come see us play now.

I was probably one of them sorry!

It’s okay, I understand I’d do the same thing.

Quite a lot of people won’t have seen you before, so what can they expect from an Ice Nine Kills show?

They can expect us to be good hopefully. We try not to disappoint, we try to put a lot of feeling and energy into our set. We like to feed off the crowd so if the crowd’s into it, we’ll be into it. We’re playing a lot of songs off the new record, almost our entire set minus a couple songs is the new record. But when we do play some of the older songs, the reaction to them here is a lot more hyped up than in the states because they’ve been hearing those songs for years and over here, they’ve never seen us play those songs. So it’s almost like they’re new in a sense. You can expect us to do our best.

You released Every Trick in the Book last year but it only officially came out in the UK on October 28, what was the reason behind that?

Really? I didn’t even know that. I don’t know why that is. I guess the timing of them releasing it now in terms of the tour would make sense but why it wasn’t released up until this point I have no idea. It’s probably because we’ve never been here and hadn’t planned to come over here when the album came out so that probably played a role in it but I’m sure the next record when that comes out it will be a much closer time period.

The record was based on different stories, how did you decide which books to choose?

There was a couple right off the bat we knew we wanted to do. We knew we wanted to do at least one Stephen King, obviously the first sing we did was on Jekyll and Hyde (Me, Myself & Hyde), but we kinda just made a list of I don’t even remember how many, maybe twenty five stories or something along those lines and then slowly started weeding them out. We didn’t want to do too many that were too similar to each other so that kind of played a part in the process. There maybe were some we really wanted to do but were too similar to something else we were already doing. That and more if we had a piece of music and we were trying to find something to go with it that felt like it had the same mood, which played a factor in it. Over time we slowly kind of narrowed it down song by song and once we were a few songs in, we kinda had an idea of what gaps we needed to fill and we went out and searched out those stories.

So it wasn’t just pick your favourite one?

No not necessarily, maybe for a couple of them but for the most part there was some kind of logic to it.

Do you have a favourite song on the album?

Yeah I think Star-Crossed Enemies is my favourite song, I know it’s Romeo and Juliet which is the most typical story somebody could pick but I just really liked the way that it came out musically. I feel like we did a few things in that song that we haven’t done previously. There’s pretty clean guitar sounds with delays on it that were way out of focus, that’s something we’ve never really done before and that’s the kind of stuff I really enjoy writing so I think musically that’s my favourite song. Communion of the Cursed is also another favourite of mine. I’m going to say those two.

Out of the books you chose to base the album on, do you have a favourite?

Jekyll & Hyde is my favourite for sure. I’ve always loved that story. I think that story being about the duality of man is such a true and real thing that everybody struggles with and has. Everybody has those two sides of them and I’ve been kinda fascinated by that inner struggle, the inner voices in your head so I would have to go with that one being my favourite.

I know you’re still touring this album but have you got any plans for your follow up? Because it’s going to be really hard to top such a great album in Every Trick in the Book.

Yeah, we even said that as we were in the process of this album. We didn’t know how this record was going to come out yet but we were like if we pull this off the right way and it goes the way we want it to go, it’s going to be really hard, like what are we going to do next? We’ve talked about it a little bit, I know we’re going to do another concept record of some sort. We just felt it would be ill-advised and kinda boring honestly to go back and just do a regular album. We haven’t totally nailed down the vision for it or the story for it yet but we’re going to try and take it a step further I think and maybe do more of a cohesive story as opposed to each song being on a totally different theme. It’s not going to be about books, it’s going to be about some other thing. It may be based on some other media form or it could just be a completely made up story we’re going to do. We haven’t decided yet but whatever we do, we know we need to take it a step further than we’ve already done. I’m confident we can do it. Come December, we’re going to have a little bit of a break for a couple of months and that’s when we’re really going to dig in and nail down a concept and start working on some demos. Hopefully we’ll be recording in the summer.

Describe the person sitting on your right as tomorrow’s headline?

*Looks to JD (guitars/screams) who has headphones in* As tomorrows headline? Dutchman drowns in blue cheese pool. He just loves his blue cheese.

You can have one super power for 24 hours. What would it be?

Jeez… I’d like to be invisible. That would be cool I think. I could stalk some people. I would definitely be stalking some people I think.

You have one question to ask any one of your idols, who would you talk to and what would you ask?

Do they have to be alive? (no) I’d ask Kurt Cobain if somebody killed him or not. I wanna know, I don’t think he killed himself so I would talk to his ghost and see what happened. I think that would be my question.

Oh man I don’t know! Crazy things don’t necessarily happen outside of shows. Show wise probably… I don’t know how to answer that question. You know what, in recent memory, we played in Austin and we played on this strip in Austin, Texas and they closed down the entire street and it’s just rows of bars. So the streets are just flooded with people. It was insane! We went out and got really hammered. I kind of forgot the end of the night but that was pretty crazy. That’s the most recent crazy thing, there aren’t too many crazy things happen to us, we’re pretty boring, we just hang out by ourselves. We’re just old men, we just wanna sit, drink alone and be anti-social.

Which Star Wars character would you be and why?

I guess Yoda just because he’s like the ultimate badass. He’s like low-key badass until he got into that whole fight, I don’t remember which one it was. He’s just wise, he’s a wise old creature. I don’t even know what he is but I like the way he talks too.

Thank you for talking to us today.

Of course, thank you for talking to me.