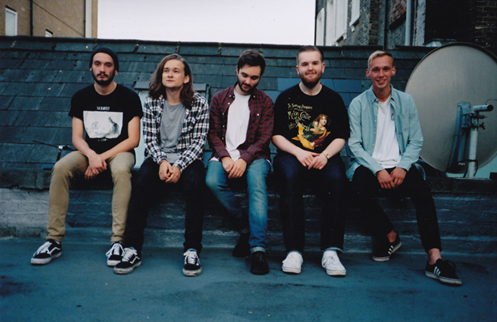 Wallflower are a five piece band from London who use their influences of 90’s grunge to tailor their sound of emo tinged alternative rock. Having released their debut EP ‘Summer Daze’ in October 2014 after working on it with Lewis Johns (Funeral For A Friend/Gnarwolves/Sharks) the band has gone from strength to strength. ‘Summer Daze’ received acclaim from a wide variety of publications and websites and with this, Wallflower have become one of the most anticipated bands of 2015. We were lucky enough to have a chat with them and here it is…

Hey guys! First of all, why Wallflower?

We tried a lot of names and this was one that really stuck. It’s mainly because we want a reason to call fans ‘Petalheads’ if we ever get that far. Slipknot have Maggots, there’s a lot of envy there…

Who are some of your influences?

We mainly find our middle ground in bands like Radiohead, Nirvana, Brand New and Paramore; although we all have our own influences that help to bring a lot to the table when it comes to writing music.

What are the goals as a band?

As cliché as it sounds we just want to have a good time with it. See new places, meet new people and play some shows in between. We all find a lot of personal meaning in the music that we listen to, so it’s also a cool feeling to even imagine our music having that same sort of effect on other people. Hopefully somewhere along the way we can do that for people.

When writing your songs, where do the ideas come from? is it personal experiences?

Pretty much everything I’ve written about is pretty personal to me. Everyone has their problems and it always helps to talk about it, so I guess writing it all down and singing about it is a good way of getting it out there and out of your head.

If you could tour with any band or artist who would it be?

I’d say Brand New. Mainly because we could listen to Brand New every night. Also, pedals.

If someone has never listened to your music, how would you describe it?

It’s pretty hard to tell people what we sound like. We kept everything pretty quiet until we had a release ready so for a long time we really had no idea of how people were going to label us. We don’t really want to be pigeon holed in to any particular category so I guess we’re somewhere in between all the bands that influence us to make music. Whatever that is…

Who is dominating your headphones at the moment?

Most of us have been listening to Taylor Swift’s new record non-stop. The way things are going we might take a bit of a turn musically so I’m learning how to dance.

What’s the plans for this year?

Hopefully play as many shows as possible in as many new places we can find, would be great to play a festival or two in the summer. We will probably spend the rest of the year working on some more material, and hopefully get in to a studio. We will see how it all goes!

Lastly, each members’ favourite album EVER?