The Nectars take on our A-Z Challenge!

Following the release of ‘I Want It‘, we asked The Nectars to tell us more about themselves using our A-Z challenge! A song that made you want to make music? ‘Breed’ by Nirvana. That chaotic energy makes me feel alive. Best rider you’ve had? A bucket full of beer and a giant hoagie. Can’t go wrong with that […] 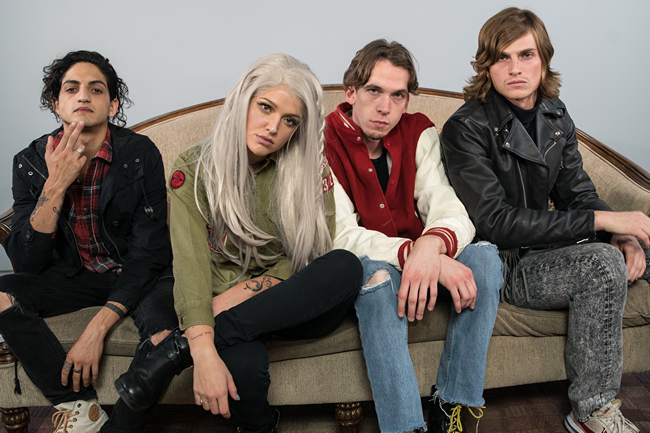 Following the release of ‘I Want It‘, we asked The Nectars to tell us more about themselves using our A-Z challenge!

‘Breed’ by Nirvana. That chaotic energy makes me feel alive.

A bucket full of beer and a giant hoagie. Can’t go wrong with that combo!

We went to the city, drank an A&R under the table, and basically had to be carried home. We slept very comfortably that night on the neighbour’s lawn.

“they’re hiding water in the lead.” This lyric is from a song called ‘HOLY’ that will be on our debut album. Currently living in a city where there is lead in the water, this personally speaks to the frustration of not being able to trust your environment and feeling the neglect of the local government and their “deal with it” attitude.

‘I Want It’! This song came so naturally to us. It’s under two minutes, loud, fast, and demanding. Those factors speak very true to our being.

This is a tough one, but currently it’s “Wet Cigarette”. We wrote that about our drunken night in the city that I mentioned earlier.

Deciding whether to eat a sandwich from a deli, pizza, and some good ol’ street meat.

Our drummer Mikey consumes more weed than food on any given day. Rumor has it that his chemical composition has changed to the point where, instead of water, THC makes up roughly 70% of the cells in his body.

Jess gets roasted on a daily basis, but we wouldn’t do that publicly because we love her too much.

Get sticky, get sweaty, get loud.

We’ve played in many bands throughout our lives, traveling all across the USA, but this band specifically has stayed in the local NJ/NYC scene. However, we will be traveling to Europe at the end of May to play some shows!

I saw Buddy Guy play live at the age of 74. That dude hasn’t stopped touring, still rips it and has incredible stage presence. That’s how I want to be at that age.

Hell yea we’d love to play with them!

EUROPE! And it’s happening so soon!

“We’ll as you can tell, I’m at a pool party right now, gotta go! Bye!” – John Pieplow (Director of Strangeland)

The last few years a lot of real world monsters have been taking centre stage with very scary totalitarian views. “Sci-Fi Television” is our attempt to escape that evil and dive deep inside to find inner peace. It’s also about being a 20 something pot head with big goals. Haha.

No way! Music is growing like anything. There is always goodies to find you just have to search!

One day we’re planning to do a Caribbean Calypso version of the entire Sci-Fi Television album so just be patient.

EVERYTHING! There is no finer feeling in the world than being told how much a song you wrote means to someone.

Haha not yet but we will work on that this summer!