Our A-Z challenge is a fun way to get to know the many bands and artists around. Here its the turn of Swedish horror metal band Mister Misery to tell us all about themselves! 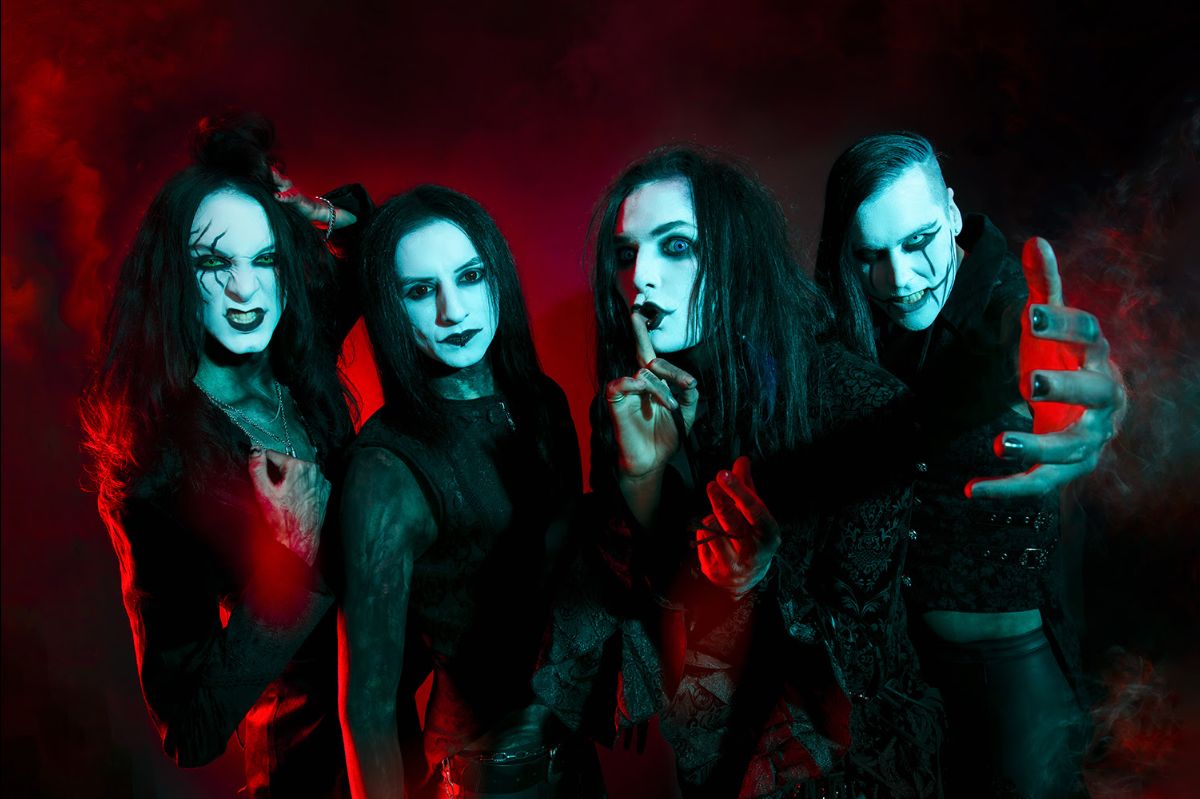 Harley: For Whom The Bell Tolls – Metallica

Harley: Well we’ve only gone on two tours because of Covid, so we haven’t had any insane riders as of yet!

Rizzy: We did our first tour supporting Beyond The Black in 2019, and the first gig was in Dornbirn – Austria. We had never been abroad before and we didn’t think that the audience knew us at all. But right after we finished our first song of the set the audience went totally crazy and screamed! And I remember saying loud to myself behind the drum kit: Holy Shit! Still gives me goosebumps.

Harley: I’d say when we stepped on the stage in Wiesbaden to open for Beyond The Black in front of 2000 people. That was quite surreal and the biggest show we’ve had to this day!

Alex: I would say the same as Harley: stepping up in front of 2000 people in Wiesbaden was the craziest live experience for me so far!

Alister: well since I’m still new to all of this and haven’t gotten the chance to play live with the guys, all I can pick from is the first headline tour where I was selling the merch! Anyhow, I’d say when we were riding kick bikes thru Prague and lost Alex!

Harley: I’d have to say ‘Home’ off of our new album, because it speaks about being away from family and friends and also about fighting a war.

Alex: I would say one of our first demos named ‘Torn’. That song really speaks to me and to many others. ‘Tell Me How’ is another great one!

Harley: ‘My Ghost’! One of our hits, it took about 2-3 days to complete and was a complete banger by the end of it!

Rizzy: From the old album I would say ‘Dead Valentine’.

Alex: From ‘Unalive’ I would say ‘Legion’. From the new one, my favourite would be ‘I’ll Never Be Yours’ or ‘Mister Hyde’.

Rizzy: Ohh! That’s a very good question. It would be awesome to feature Sam Carter from Architects.

Alex: Corey Taylor or Alice Cooper. If Chester Bennington would still be alive, he would be my first pick (RIP).

Alister: Alice Cooper would be insane since he’s my biggest idol and one of my biggest inspirations!

Rizzy: Right now, I would say to meet up and hang out with each other.. We live like three hours apart so it’s a little bit of a hassle to just come over and hang out or rehearse.

Harley: Hardest thing is maybe to find time to just hangout. We associate each other with work because every time we meet it’s about rehearsing, interviews or touring. We rarely get to just hangout and do nothing, because we live so far away from each other we take the opportunity to do band things when we meet!

Alex: Definitely to hang out casually together, which almost never happens as the guys mention. Otherwise, I would say to find a good balance with personal economy, life and sacrificing so much in hopes of one day finally “make it”.

Alister: I’d agree with the others, getting the time to just hang out, also finding a perfect balance between the normal life and the band life!

Harley: Well, don’t know if it’s interesting but I’m also the one who mixes and produces all the Mister Misery songs, as well as writing them. I’m also a huge nerd when it comes to games, movies and card games.

Rizzy: For some weird reason when we go out on tour we joke around and start talking to each other like old people… We sound like an old grandpa or something and we are messing with each other that you can’t hear what the other is saying and you pretend you have multiple broken bones in your body and stuff like that… I don’t know why this happened, but it brightens your day a bit when you are unloading the trailer with all heavy backline for example.

Alex: I think it was when we had to travel to UK from southern Germany or so. Took like 10 hours I think.

Rizzy: For me it’s the drummer of Periphery: Matt Halpern. I love how he can make so complicated metal music groove so much.

Harley: Wow, I’d have to say the boys in Avenged Sevenfold! The live shows they put on is insanely good!

Alex: I really haven’t been looking or found any new upcoming bands lately.

Alex: In This Moment

Rizzy: For me ‘A Brighter Side Of Death’ stands for inspiring others to do music and to be happy in life. You only have one life so make the best out of it and help others to be their own best selves.

Harley: It’s about legacy and what you leave behind when you pass away. That legacy of joy, music and love is the brighter side of your inevitable death!

Rizzy: Our upcoming tour supporting Beast In Black (Hopefully this fall in Nov/Dec).

Rizzy: Not necessarily, I mean… I think in today’s music industry there are a lot of amazing new bands coming and poppin’ up everywhere and most of them are really talented and good. It’s so much easier to write and produce songs over a laptop these days and you can create so many new interesting sounds that you couldn’t do before, with all the new technology. But I really do find a charm in the older bands as well, they worked with what they got and did the most out of it.

Alex: I would have given my left testicle to be born like 30 years earlier, haha!

Even if it was a bigger hassle to travel and bring heavy gear, the whole music industry was way more unique and respected. To be a rock star today versus 25-30 years ago is night and day difference in my opinion.

Rizzy: No, we don’t have anything unusual I would say. Maybe our necklace then…

Alex: We’re releasing our first jewellery merchandise with the new album. A necklace with our band emblem on it!

Rizzy: We’ve done two Orchestral versions of our songs now: ‘The Blood Waltz’ and ‘Ballad Of The Headless Horseman’ – that was really fun to do and the fans loved it. It would be cool to do a pure acoustic version of some song in the future.

Rizzy: Everything! If it wasn’t for them we would be nothing… So THANK YOU!

Harley: They are the reason we can do this, so they mean everything to us! And I sincerely mean that!!

Alex: They are everything to us honestly! We love our fans, we love to interact with them and give back some of the insane amount of love and support we receive from them.

Alister: Like Rizzy said – EVERYTHING! It is thanks to them that we are able to do what we do! Otherwise we wouldn’t have anybody to play for, write music for, etc! They give us all the support in the world and we are forever grateful!

Harley: None as of yet haha!

Harley: Always our own fault. Maybe the driver haha!

Alister: Dracula? No, I’d say a bat or a poisonous snake!