Lizzie Speaks To One Last Thrill

After Lizzie enjoyed their EP ‘The Universe and Human Stupidity’ when she reviewed it, she wanted to catch up with band and here is the chat… 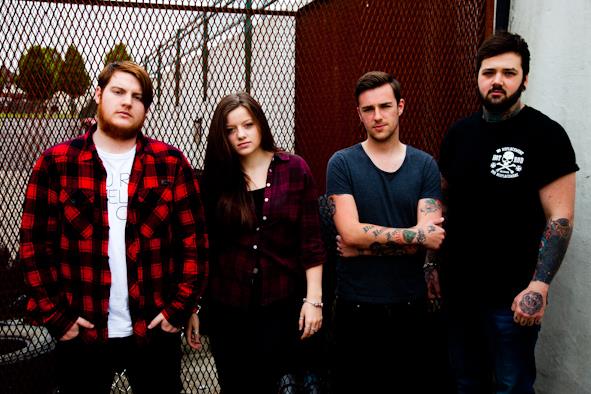 One Last Thrill formed in August 2010 with the lineup consisting of Gareth Haskins on Bass and shared Lead Vocals with Steph Whitehead, Oscar Rees on Lead Guitar and Josh Lock on drums. Adopting a mixture of influences from bands like Green Day, Guns N Roses, The Who, Thin Lizzy, Black Stone Cherry and Blondie they have created their own fresh take on Rock n Roll. After Lizzie enjoyed their EP ‘The Universe and Human Stupidity’ when she reviewed it here, she wanted to catch up with band and here is the chat…

Where/how did you guys get together?

“In 2008, at what was called Castledown School in Ludgershall. Gareth and Oscar started playing Green Day covers with two other former members. We won a talent contest in school (which Steph entered separately and came second!) That really ignited the spark to want to play live and later to write our own songs. Steph joined a year later and we became a five-piece and since undergone various line up changes”.

(To Steph) what is it like being in a band with all men?

All: “Thats hard to answer. Its all I’ve ever known. We’ve a been friends for so long it’s not as bad as you’d think it would be, I’m quite used to all of them and their antics now… Even though they can be quite disgusting!”

(To the guys) what’s it like being in a band with a woman? Since many bands are all male

Gareth: “It doesn’t just look cool and a bit different, since many bands are fronted by men and generally male-based but its also good because she keeps us all well behaved!”

Oscar: “Its slightly different for me because Steph and I have been a couple since just after she joined the band over 5 years ago! But in terms of being in a band with a girl, I personally think a rock band with female vocals sounds awesome! There aren’t enough female rock singers in bands getting out there and Steph is brave to do so in a predominantly male-based industry.”

Josh:” Being in a band with a female vocalist is really cool, especially with our genre. As Stephs vocals are so powerful, I feel it really works and makes a massive impact on our music, also gives us a bit of a different sound to other rock bands on the scene at the moment. ”

What are your influences as individual musicians and as a band?

Steph: “In terms of vocalists I love classic rock singers like Axl Rose, Robert Plant, Rodger Daltrey etc. but I also love Alanis Morissette, Myles Kennedy and Chris Robertson. I do, admittedly like my pop music too, I really like Jessie J and Pink because vocally they are fantastic. I love all types of music so I try and mix them all together to create something new”

Gareth: “The Who and Green Day mainly. I like a lot of music so i take influence from a lot of bands and artists. I like a lot of northern soul, you wouldnt think that would influence a guy in a rock band but somehow it does. I love old mod bands too like The Chords, Secret Affair and Purple Hearts”

Oscar: “For my lead playing I really take a lot of pages out of Slash’s book, he for me is the ultimate riff and solo writer. I also take a lot of influence from players like Jimmy Page, Van Halen, Jerry Cantrell and I absolutely love Black Stone Cherry. Theres also some other people many probably wouldnt know like Frank Gambale, Alan Holdsworth, Tommy Emmanuel etc”

Josh: “My main influences are from a wide range of bands when it comes to playing music, foo fighters, thin lizzy, a day to remember, lower than Atlantis, system of a down, I could go on forever but as a drummer there are so many great drummers to look up to! And nothing drives me more than trying to better myself as much as I possibly can, play some great rock shows and maybe one day be that drummer that someone looks up to”

Where do you expect/hope to go with the band?

As far as we possibly can. Thats the long and the short of it!

Are there any fun things coming up for you? Anywhere people can see you live soon?

“Yeah, we have a few festivals coming up that are local to where we’re from and we’re in the planning stages of a tour in either August or later on in the year… Depends on how quickly everything gets done! But watch this space!”

What do you do when you’re not with the band?

Steph: “Oscar and I are studying at BIMM London at the moment. I’m doing a Music Production degree and Oscar is doing a Popular Music Performance degree in Guitar.”

Gareth: “We have jobs but in terms of hobbies we all like getting tattoos, hanging with mates at the pub and general get togethers. They’re a big part of our lives, we’re very social. I also go on a lot of scooter rallies, they’re great fun”

Oscar: “Echoing what Steph said, we live in London mainly so general socialising is what I love to do. Music is a huge part of my life its very rare I’m not doing something to do with it. That and i do like to get drunk and get tattoos … not in that order though… that only happened once!”

Josh: “When I’m not with the band I’m either at work where I stick metal together with heat and electricity using my bare hands… (That’s how to make it sound cool anyway) most people just call it welding. Or I will be spending time with my gorgeous little daughter and partner”

Finally, what are the best and worst parts of being in an active band?

Steph: “Best part is the traveling and gigging, I think that’ll be the same for all of us. The worst part is being in a van with 3/4 guys after a gig who stink and are either hungry or drunk”

Gareth: “you get to travel round, see new places, meet new people. We like that, being a social bunch. Worst thing for me is always being skint!”

Oscar: “For me, gigging and traveling with these guys has to be the best thing. It’s really good fun doing such a cool thing with your best friends in the world (and my girlfriend!) and seeing the crowd react to our songs, no matter how small the crowd!! The worst thing would be how stressful things can get, especially financially. When you have a demand to keep active as a band and a lot of things cost money it can pile up and get on top of you which can really suck”

Josh: ” The best things about being in a band are all the laughs we have on the road, there is always a funny story to tell, we all just get on so well. Also music and playing drums is a massive part of my life so being in this band means so much to me. Nothing beats playing our music live in front of a good crowd! There isn’t many things I can say when it comes to the worst things about being in a band, all I can think of really is the cost of everything. It is hard work being in a band but the hard work definitely pays off when you get back on the stage or even just hearing small improvements to your playing on recordings etc”

“We just want to say thank you to AltCorner for getting in touch with us, they’re doing a fantastic job with unsigned bands! Cheers guys!”