Our A-Z challenge is a fun way to get to know the artists we listen to. Here it is the turn of new act Like Giants to tell us all about themselves! 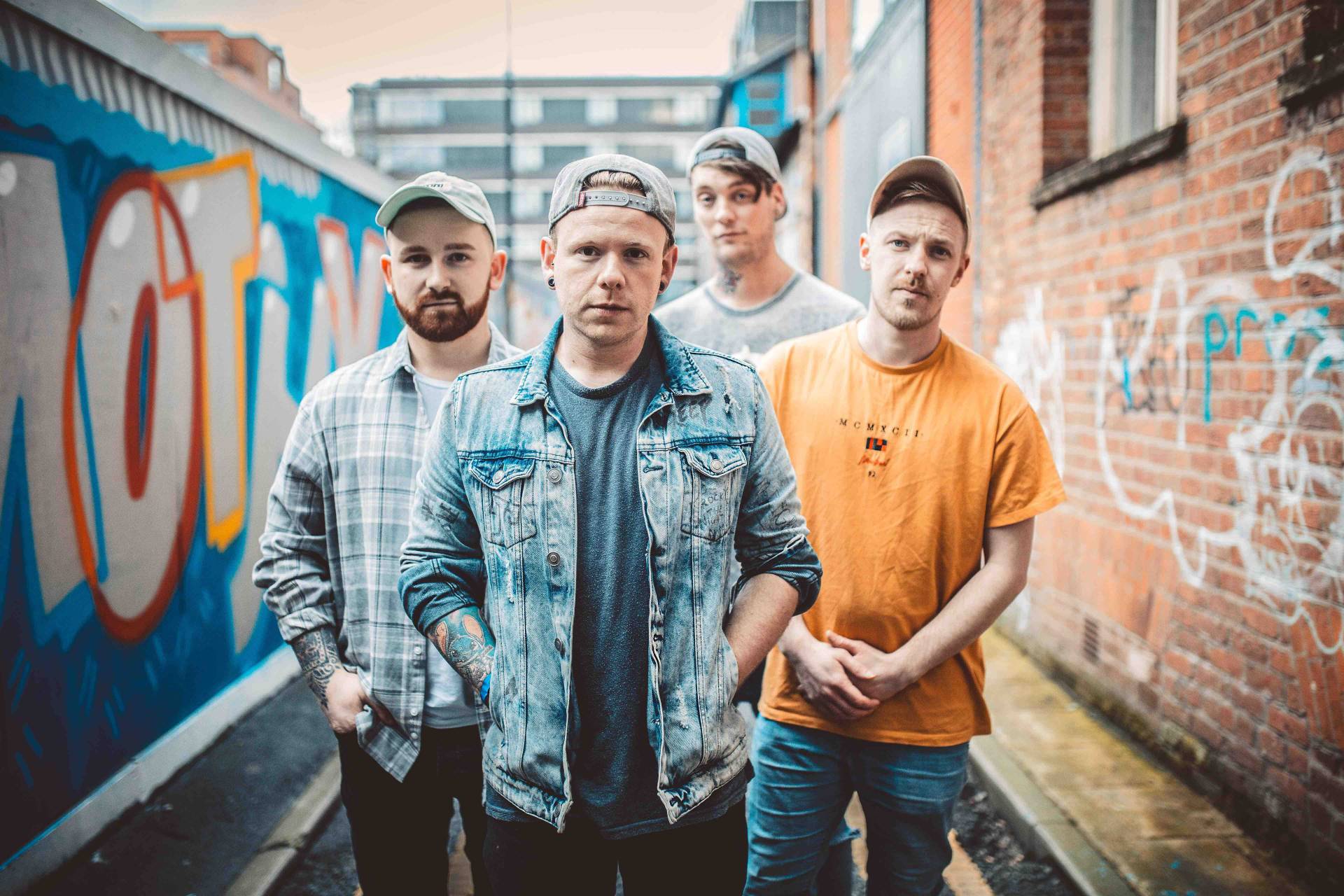 We all have collective tastes in music, we range from Bullet, Queen, Neck Deep and even Dean Martin (cough Billy), Bohemian Rhapsody would be Ben’s choice, the formulation of that song, the progression and sure amount of layers, when you hear it even to this day, it STILL sounds HUGE!

We recently did a show in Glasgow where we received, beers, soft drink and PIZZA! If you want to know a way to our heart, then pizza is a sure-fire way there!

Finding out we’re supporting; ‘Less Than Jake‘ and ‘Goldfinger‘ at the O2 Academy Birmingham Main stage, we all have been going to gigs there for as long as we can remember, and the realisation of playing the main stage, treading the same boards as many of our idols is mind-blowing!

The first four chorus lines of ‘Juliet‘; “Are you happy with him now, that you stole my heart away, I never meant to let you down, but I guess it’s over now”. I wrote that song after finding out I had been cheated on, it’s a very sentimental song, even to this day, but in a live environment, it’s always the one that I look forward to playing… crazy aye!

Weirdly enough, Cut and Run was the easiest song to write, we like to write about what we know, and every one of us in the band have suffered at the hands of depression and/or anxiety, and we’re all strong believers that talking about it, really does help!
We all have gone through some seriously dark times in the past, Cut and Run is about bringing the awareness to something so serious, a song we can all connect and relate to on so many levels. Our DM’s are always open for people to hit us up if they feel like they have no one, or just a friendly shoulder to cry on, we’ve got you!

Again this one would be different for all of us, Cut and Run is heavy and riffy, but when we drop into ‘Right in the Childhood‘ it’s so bouncy that we all can’t help but jump along.

For Ben this would be; ‘William Ryan Key‘, Kai would love to do a collab with ‘Ben Barlow‘ (Neck Deep), I’m sure Billy would have loved to have ‘Frank Sinatra‘ involved, Sam would be ‘Matt Tuck‘ (Bullet for my Valentine) as he is one hell of a songwriter, working with him on something or even having Dave Grohl throwing down some vocals would be immense, we love writing and would honestly love to work with anyone.

Communication, Organisation, Finances! When you’re in a band there’s so much planning needed to make sure things run smoothly, but still not jeopardise the ‘fun’ element, we always have fun when we’re together, we all share similar quirky personalities, fortunately, this works for us at least. You do hit challenges along the way, this industry isn’t cheap. And it’s very difficult to make waves, but we feel that we have got to a point where we don’t rock the boat with each other, we give people space if and when they need it, but mostly feel like we’re organised, which is key to making most things run smoothly.

Kai sang solo in front of the queen when he was 15, oh and almost all of the band STILL play Pokemon Go (Not endorsed).

We’re not the type of band to keep to ourselves, we speak to all the bands we play and stick around to watch every set. But, we’re all Harry Potter fans and the scene where Voldemort announces Harry Potter’s death, then does that strange laugh, we have kind of adopted in most shows we have played. It’s even got to the point that other bands on shows we’ve played, have used it as a call and response, even on social media! Shout out ‘Harry Potter is dead’ when you come to a show, (or meet us in person) and see what happens!

Everyone writes songs in a different way, we use the voice recorder on our phones to record melody ideas or guitar riffs, then send it on the bands ‘New Song ideas chat’ on WhatsApp and take it from there. Firstly, we write about what we know, this way we have more of a connection to the lyrics and story we want to tell. We also spend most of our time writing the chorus, as this is primarily the main part of a song that people remember.

As of writing this Glasgow (Bloc+) and Edinburgh (Opium) which were awesome! We heard Scotland know how to bring it, and they definitely didn’t disappoint, having to drive a good 7 hours (after finishing our set, travelling back from Edinburgh), this took the crown of being the longest distance we have travelled for a show. America, Japan, Europe, we’re now looking at you to change this.

Kai was backstage at T in the Park a few years back and was fortunate enough to run into, and speak to (for a good half hour) Dave Grohl. He’s amazing! Easily one of the nicest dudes in Rock. He opened up his heart with everything from being a dad, day to day life, things to watch out for in the industry and most importantly, go out and kill it every night! Whether it’s in front of 2 people or 20,000, always make sure you leave everything on stage, and if you’ve seen us live before, they’re words that we definitely abide by.

Even though we’ve only been together for a few months, we have had the pleasure in playing with some awesome bands, we would love to big up the Time of the Mouth, Yvet Garden, Insomniacs, Project Revise lads, there are so many bands we could name, we don’t wanna show favouritism, GET OUT TO YOUR LOCAL VENUE! There are KICK-ASS bands out there that most of you haven’t heard, support live music and discover your favourite band you never even knew existed.

Neck Deep, or even State Champs would be ideal. Both have been huge influences in our lives, we have been listening to them for so many years and would love to support them on tour. Our live performance is ‘lively’, we love to bring the noise and the ‘Shapes’, we try and get everyone in the crowd involved, we don’t just stand still, we’re up there living our best life, and we really want to share this with each and every one of you beauts that come to watch us.

Ben would love to head over to Europe to check out all the WW2 locations, Kai would love to head over to America or Japan, Australia, we love to check out different cultures and see how people react to a live environment, South America is famous for having amazing reactions to shows, we want to experience the world with everyone and anyone. So any promoters out there looking for some cheeky chappies to get people moving hit us up!

”Harry Potter is dead! – Heee, hee, heee” [If you haven’t seen the scene where Voldemort announces the demise of HP, check it out on YouTube as this is always shouted at us at least once every show we play.]
No seriously!

We recorded ‘Sovereign‘ in Woking with Matt O’Grady, (You Me At Six, Deaf Havana, Don Broco). But there were 2 songs still without lyrics, so before Kai went into the studio to record them, we would find ourselves every night, watching football and grabbing a pint at the ‘Sovereign’ pub in Woking. We then thought well actually, this could be a really good title for the EP.

Music tastes do vary, Kai loves the ‘Myspace era’, you can’t deny that the era that brought bands like; FOB, Panic! at the disco, Paramore was KICK ASS! But recent times have brought a surge of amazing groups like; Neck Deep, Woes, WSTR, Hot Milk and a load more! Back in the day radio was diverse, you could have Eminem played next to Foo Fighters then Craig David, but these days we live in the ‘everyone is a critic era’, which has made it a lot harder to show unique qualities in music that is more accepted by general music fans.

We don’t have any unusual merch, even though Ben is forever telling people we should sell pants and boxers. We have merch available at – likegiantsuk.bigcartel.com (was that a cheap plug, I think it cough… (shirts are only a tenner) was!)

We love acoustic songs, we try to write our music on acoustic first if we can. We can then see where we cant songs to go, and even with the same lyrics, songs can have such a different effect on you, when played in a different variation.

The world! We don’t see our fans as a statistic, we care for everyone and try to make everyone who comes to see us play welcomed and invited. Seeing the effort and hard work that some fans go to, to show support for us random dudes, is mind-blowing. Thanks to social media, we have dedicated fans purchasing our merch in countries like France and America, people flying over from Germany to check us out at a gig, it blows us away! Especially as we have only been a band for 2/3 months! We love meeting every one of you, and if you need to chat then come and SLIDE into our DM’s and we will try to get back to you as soon as we can.

Not really no, we all move around and live a little, but nothing that has put us in the hospital as of yet, we’re not as ‘BADASS’ as Dave Grohl, although if that ever happened, then we have the same mindset as the Show must go on! No matter how many pieces we’re in.

Billy, almost every time due to traffic. It doesn’t matter whether we’re in the desert or anywhere that civilisation hasn’t touched, we would still get held up in traffic if Billy is there.

Probably a SEAL or SEALION, we’re both carnivores, we all communicate really well, in Ben’s case (like the seals) using clicking and trilling noises, (honestly we never understand what he says half the time as he speaks so fast), they’re cheeky chappies and can mosh like NO ONE ELSE! They can sleep a lot and anywhere, they’re lively and not to mention cute as hell (ladies) x.