IDestroy take on the A-Z challenge!

Bristol rockers IDestroy released their new EP Pure Joy Of Life last week and are set to hit the road with The Men That Will Not Be Blamed For Nothing. We asked the band to tell us more about themselves using our A-Z challenge! A song that made you want to make music? Beat It – Michael Jackson […] 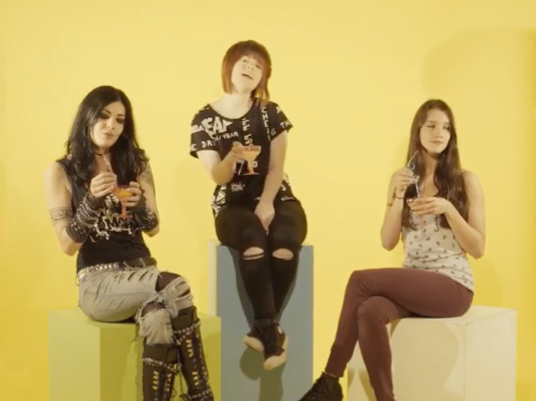 Bristol rockers IDestroy released their new EP Pure Joy Of Life last week and are set to hit the road with The Men That Will Not Be Blamed For Nothing. We asked the band to tell us more about themselves using our A-Z challenge!

At our first show in Germany last year we had were fed amazingly well. Sandwiches, fruit, vegan brownies, crisps etc when we arrived at the venue. We had our fill, then the venue owner came out with a main meal for us! Doing most of our touring in the UK, we are not used to this kind of hospitality, too full to eat any more! They also sent us away with loads of beer. Happy band! (Becky)I liked the weird purple potato stuff we got given in Spain. (Bec)

Being stalked by a crowd of young female fans in a Spanish town!

I’ll let you decide that one.

Talking Shit from our first EP has always been a favourite to play live. Maybe it’ll change on our upcoming tour though, we can’t wait to start playing the new tracks.

The anti-social hours. Having a strange social life where you have many acquaintances and make new friends that you only see a few times a year, but miss out on important times with your friends back home.

Bec’s party trick is balancing a pint of beer on her head whilst walking around the room.

It’s not really a joke but for some reason we always start singing Shania Twain – “You’re Still The One” every time we arrive at a show.

We’ve driven all across Europe for shows, 13 hour drives don’t seem that unusual to us anymore!

Hmm… Jack White at Glastonbury Festival a few years back.

“Never forget, music is the most important thing in the world”

I found the title ‘Pure Joy of Life‘ written in my phone the morning after a stupidly drunk after show party in Frankfurt last year. Turns out it’s the English translation for the name of a bar over there.

We have four weeks of dates in the UK & Germany, starting March 11th.

I would agree with that, but I try to remember that it’s easy to get nostalgic. If you’re thinking of 40 years of rock and pop music and compare it to the new music that’s on the radio now, of course older music seems better, it’s the stuff that has stood the test of time and the ‘best’ of those decades. I’m sure that from the future, looking at the decade of 2010’s as a whole, loads of great tunes will be sticking around! (Becky)

We really want to get IDestroy pants! We’ve yet to find anywhere to make them for us though…

I quite like playing them acoustically. We did an acoustic BBC Introducing session last year which went down really well with the fans.

We super appreciate everyone who takes the time to come and see us play. Anyone who spends their hard earned cash on music and merchandise. We would have a very lonely and boring time without you!

Hmm I bruised my ribs a few months ago crowd surfing. The day after was the first day in the studio recording the new EP, I was in agony as well as feeling so sick. I’ve got photographic evidence but it’s kinda gross so maybe I won’t share those! (Bec)

Ha! It’s definitely a combined effort with the lateness. (It’s the traffics fault, not ours though!)