Our A-Z challenge is a fun way to get to know the many bands and artists out there! Here it’s the turn of Friday Night Lights to tell us all about themselves! 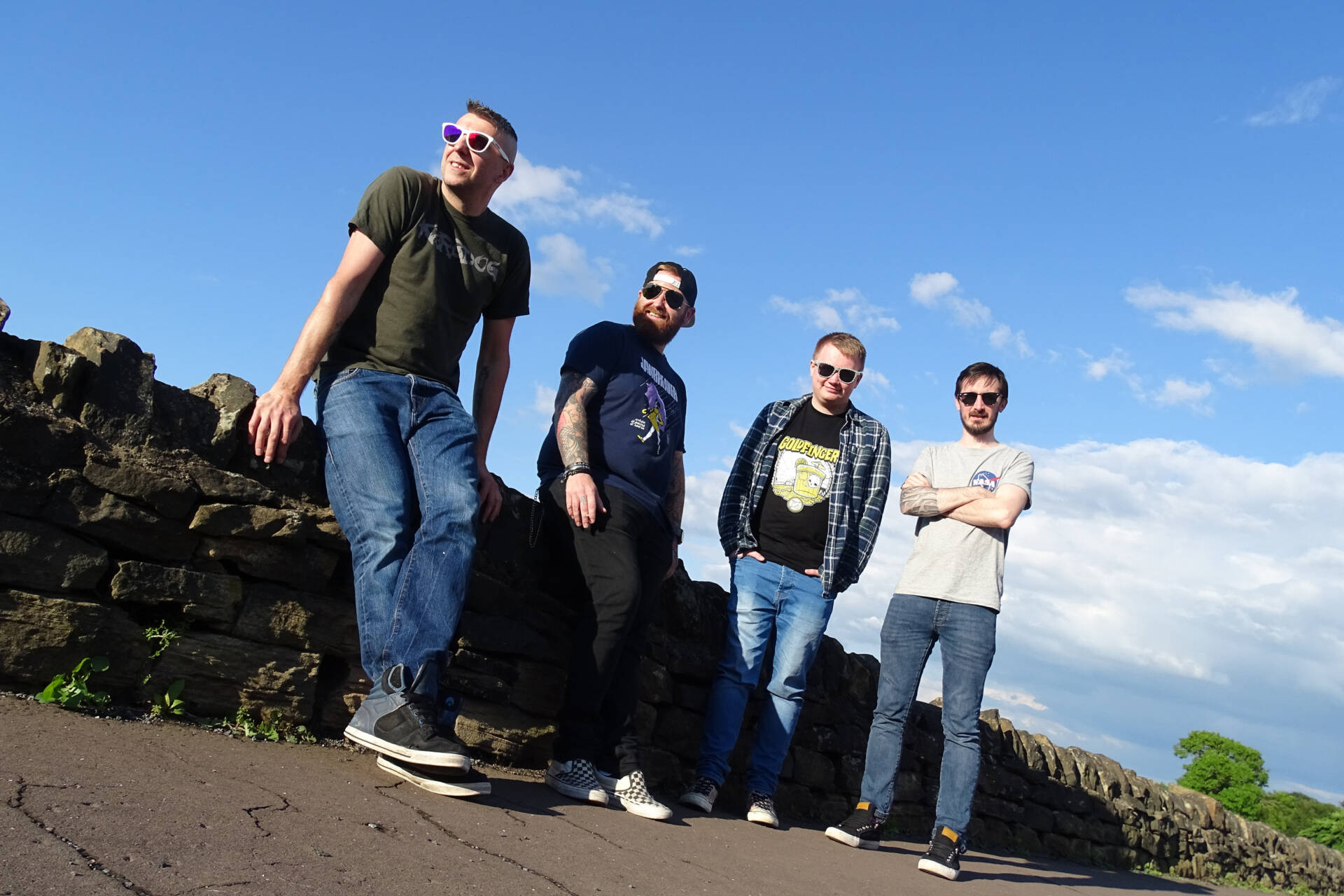 Our second gig at Fontaine Palace in Liepāja, Latvia, we had like 2 bottles of Rum and a huge food platter each, it was long hard night trying to finish all that off, but we couldn’t possibly waste it (Liam)

If I’m honest. Probably our first tour to Poland & Ukraine. It was all totally DIY and we had no clue what we were doing, HaHa and we had no idea if there were actually going to be gigs when we turned up either, but they all happened and they were amazing and crazy. We even wound up doing a TV interview for a local Ukrainian news show because we were the first ever British band to play in Kalush, Ukraine. Great memories! We’ve been back and played many times since and they are always crazy shows.(Sean)

I would say it’s the first line from 3 weeks 3 months chorus.

I remember my sister typed my daughters name into her phone and you could keep pressing space and it would predict the next word each time, anyway it came up with “Gizella the best place in a long way home” . At the time it never meant anything but a few weeks later my partner and daughter had to move back to Hungary (for 3 weeks 3 months)to care of her mum.(Rik)

Another Hopeful Summer on our second release, we got asked to do a song for Bradford City FC going to Wembley by a friend of ours, Rik came up with the idea that night then the next day we wrote it together in like 2 hours…they didn’t use it though “it’s too heavy” (Liam)

Longest Fight, which was the first song we ever wrote as well (James)

Ooh, this is a hard one. There are so many! As a drummer I would say Nathan Young(Anberlin) or Ben Cato(Dangerous summer/Dim) but I’ve been ripping those guys off for years so that probably wouldn’t work now, Lol. I genuinely think that Garrett Klahn, singer from Texas is the Reason would be fantastic! (Sean)

The nature of the music scene in the UK is that it is a reflection of the industry. Thus, it is entirely based on who you know, and the bands with the most friends/ biggest family are often the same ones getting all the big opportunities. It can be frustrating at times, especially when you see hard working artists who are more deserving get passed up on things. (James)

For us as a band, I would say open mindedness. You can go into writing a song with preset ideas of how you want it to sound or feel but that just puts more pressure on you as a song writer/musician. We tend to find jamming something out and seeing where it goes works best. At least for us. You can then decide if it’s worth pursuing as a song or whether to change it up or scrap it completely. Once the song starts to come together, then the lyrics and vocal melody tend to come naturally. We find that however the song comes out, they still sound like us. (Sean)

Joe Strummer. He’s the embodiment of what it means to be punk; questioning authority, challenging the mainstream, and sticking up for the little guy. If you’re after the honey, you don’t go killing all the bees.(James)

I am LOVING WAAX right now, lots of attitude but genuine not contrived or ego filled, also Slackrr are killing it. (Liam)

For me, that would be Anberlin! They are a big influence on us as a band. I would also say Biffy Clyro too. They are such a great band, especially live. (Sean)

Germany. I am fully in love with the country and am desperate to go there with the band. The Punk rock community is thriving there, and I believe our flavour of music would be well received. (James)

You will never be ready for your first gig (Rik)

I love cycling and was watching Tour de France one time  and the commentator came out with the line ‘bridge to engine , we need more power ‘ . I loved the line and stuck it in my note book ,thanks Phil Liggett (Rik)

At the moment, we only have two shows left this year (that could and probably will increase). They are Coyote Ugly in Liverpool on September 30th and The Talbot in Blackpool on October 28th. (Sean)

Yes and no. It’s hard to say because while past decades have seen revolutionary artists come and go, you never know which new band is about to emerge. There’s some really interesting things happening at the moment with new artists, which shouldn’t be overlooked. But at the same time, it is vital to remember your roots. (James)

We have experimented with a stripped back version of one of our newer songs ‘back to youth’ which sounds great. But I would also love to re-record our first EP now that we have a more developed sound as a band. (James)

The absolute world!! We never actually expected to have any but as time goes on and you start to see similar faces at shows and more and more people are wearing your merch and listening to your songs, you realise that your focus shifts and it starts to be more for them than for yourself. It’s still a surreal feeling to be fair. (Sean)

Hahaha! Absolutely! Mainly just me though. I’ve broken my finger while playing during a photo shoot a few years back. I wound up having it x-rayed the next day and having to have my finger nail drilled to release the blood from underneath too. That was not a pleasant experience. I also split my knuckles occasionally on the drum rims during shows and end up with blood everywhere. My legs are also usually dotted with bruises from getting a little carried away behind the kit.(Sean)

Probably Liam or James lately as we’re split between Leeds, Liverpool and South Wales atm, so Liam coming up from Wales takes 4 hours and with the train strikes even coming from Liverpool is hard for James (but we don’t hold the strikes against the rail workers) (Liam)

Let’s pretend you find Chimera’s in the zoo, cause we’re a noisy mix of things smushed together. (Liam)