For Lack Of A Term take on the A-Z challenge

Our A-Z challenge is a fun way to get to know artists. This time, its the turn of New Yorkers For Lack Of A Term! 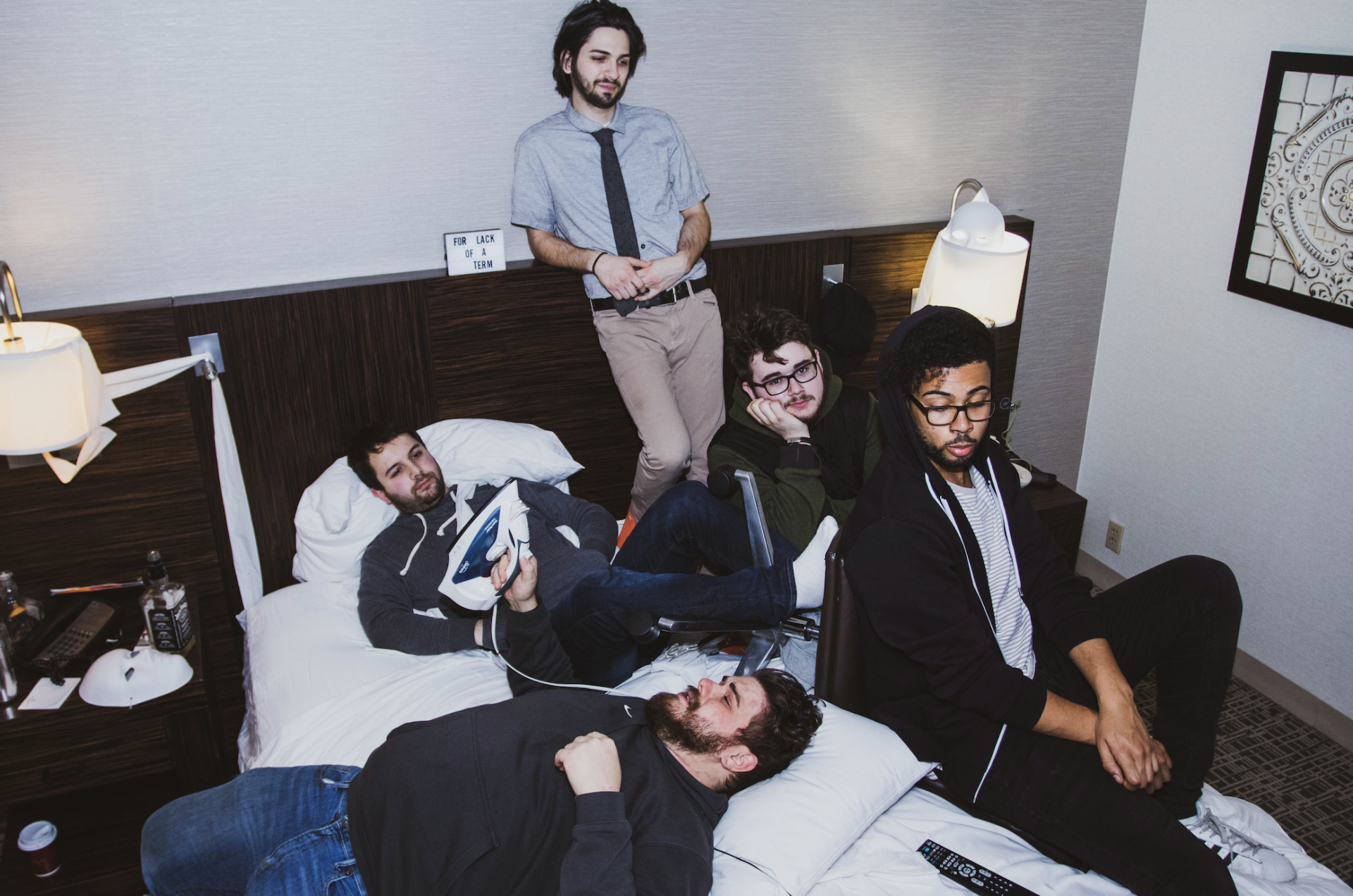 Arthur: Definitely, Grand Theft Autumn off of Fall Out Boy’s, Take This to Your Grave.

Conor: Hell’s Bells by AC/DC. My dads favorite song so he would always play it when I was young. The meaning, the tone of the music, and that amazing guitar playing just set me on this path.

Ryan: Bridges Burning by Foo fighters. First live show I’d ever seen and I have this vivid recollection of the lights in the venue going down and the band playing and the lights matching the tempo and it was the first time in my life I’d ever thought, “Damn I need to be making songs”

Ryan: We opened the Pleasantville music festival in 2017 and the hosts were entirely hospitable. We felt welcomed and included and kind of like superstars for the day. We also had a great experience on our most recent weekend tour at the parlor cafe in North Adams MA! The owner Julia provided all bands with food and drinks and we couldn’t have been more thankful! On our first tour ever, we bumped into a Red Bull car at a gas station and they provided us with a seemingly infinite amount of Red Bull for the duration of the tour.

Conor: Turning our tour van into a party bus on our last tour. A great night with amazing people stuffed into a certified “shag wagon”

Ryan: Craziest? Nothing comes to mind. Maybe going on tour and trying to figure somewhere to sleep every night.

Winning the Pleasantville battle of the bands was definitely up there, although maybe not so much crazy as it was unexpected

Conor: I barely know what to sing half the time

Ryan: “Does she even know how much of me she has”

From Momentum in a Bottle. Speaks to the cruel reality that maybe some people aren’t aware how deep their hooks are sunk into another person

Arthur: It’s a song we have yet to release but it had very quickly fallen into place, collectively I mean everyone’s ideas seemed to just fit.

Ryan: The lyrics for our new track in 6/8 (still untitled) poured out pretty easily. It was a song written in the midst of some severe personal turmoil

Arthur: Make A Decision, it’s starts slow, has a  build up and just kinda like hits you at the very end. I feel like it may be arguably some of our best work

Conor: Either Clean Slate or Recalibrate. Both are just so fun to play live, and when the crowd gets into the song it makes it 5x’s better

Ryan: We have a new song in a 6/8 time signature that’s a a lot of fun to play. We’ve played it once live but it’s definitely one of our more unique songs. There’s another new track we have called “Forward” that has a sort of war/tribal drum bridge that is a lot of fun to play live.

Arthur: Out of my friends I’d love to somehow feature all of them in one or like each track, we all play so many different things, it’d be damn near impossible to pick.

If it’s someone bigger than us, I can’t even begin to imagine how it’d work but, Keith Buckley of Every Time I Die, Shane Told of Silverstein, Bryan Garris of Knocked Loose, Ed Sheeran. But the list goes on I have so many dream collaborations.

Conor: Denzel Washington. Not to sing or play, just to talk.

Ryan: No one in particular comes to mind. But Ryan has been wanting write a new song and have it be a male/female duet

Arthur: Finances, & relationships without a doubt

Conor: Dealing with each other’s attitude

Ryan: The easiest thing about being in a band can also be the most difficult. Having a democracy can sometimes be stressful. Not everyone’s going to be on the same page or have the same preference on a given topic. Compromising is key

Conor: For a period of time, my lead singer Ryan was in fact an actual clown

Ryan: Did you know I am an (under) accomplished musician/actor/comedian?

Arthur: There’s too many, I won’t say who but on multiple occasions one of us has been called greasy.

Arthur: Patience & compromise, I can remember so many times where I hated a song & after it all came together I enjoyed it so much more.

Ryan: Lyrically, writing when the feelings and inspiration are fresh. Don’t dwell and write about something two weeks after the fact. The words will be deeper when you’re in the thick of it. Musically, collaboration is key. Listen to each other. Absorb and transmit ideas. Songwriting is always the most cathartic when everyone gets a piece.

Arthur: That would probably only really happen while on a tour but we had a 6 hour drive from one show to the next on our last run, which isn’t too bad.

Conor: Anything out of Yonkers is too far imo

Ryan: Burlington Vermont at this small but classy venue called Radio Bean. That was one of the more fun shows we played on our recent run with Synapses Firing

Arthur: Keep Flying as a whole, we’ve played local spots at home with them and it’s packed but they just played the warped tour 25th anniversary show & the crowd was HUGE. The progress they make at the pace they do is wild.

Ryan: The Foo Fighters blow my mind every time I see them and are responsible for me wanting to be a musician in the first place

Arthur: Not so much if they’d be considered new but they have been making a lot of progress as of late but these bands Romancer & Rarity! Canada is killing right now.

Conor: There’s this band Sleep In. who are pretty dope

Ryan: Some of our Westchester friends are truly amazing musicians. Shakeout, Maintenance to name a few

Arthur: I think opening for Paramore would be pretty sick.

Arthur: Japan, I’ve never been but i have wanted to go since my childhood. I also hate planes which is why it hasn’t happened

Ryan: Definitely the west coast. There’s something about the California area that seems so appealing. Chicago too! We’ve got a decent amount of fans out there

Ryan: stream our EP! Get those plays up! Also “I have a dream”

Arthur: I think Recalibrate, was our way of continuing despite all the changes coming into place when we were starting to get things in motion. It’s not exactly starting from scratch but it’s also very different & not how we were before.

Ryan: Most of the tracks are about finding yourself in a situation that you know you probably shouldn’t be in, and then having to start all over. Losing progress, burning bridges. The idea of taking a “minute or maybe several to recalibrate” is a consistent theme in all of the tracks and as such, it felt appropriate to title the EP “Recalibrate”

Arthur: We’ve got a tour with Another Astronaut starting the 1st of next month, we’re going down to Florida & back! After that it’s covering the east coast pretty much!

Ryan: Catch us in Coney Island this Saturday! If not on our upcoming tour with Another Astronaut

Arthur: I don’t know, I feel like we had such a sense of carelessness when we were younger that it was perceived differently. I don’t know if that’s because of the quality of music, music is always changing & what not but I definitely remember being able to enjoy it more.

Ryan: I don’t necessarily subscribe to that notion. Great music can be found in any particular era of time. Classical, contemporary. There are hits throughout time and they keep coming.

Arthur: Ryan has had this idea of getting Pint Glasses for the longest.

Conor: I’d like to bring in jean-shirts with our logo on the butt

Ryan: Nothing too out of the ordinary. But we’ve been playing with the idea of grabbing condoms that say “For lack of a Sperm”

Arthur: I’d love to speed up Momentum in a Bottle off of our last EP, in like a Neck Deep December (again) kinda deal. I was a big fan of that.

Conor: I’d love to do a smooth jazz rendition of a song, but I’ve been shut down multiple times

Ryan: When you’ve been playing the same songs for some time, eventually they become just the slightest bit stale and you wanna mix them up. Some of our songs have also got the potential to be fantastic in an acoustic arrangement

Arthur: The absolute world, because we wouldn’t be here without them. To think that my friends & I make music, and that people not only care but like and support it is WILD to me. We’ve met amazing people on the road and made some really good friendships all because they were a fan of us.

Conor: The absolute world. It’s always been my dream to play music live, and any single soul that comes and hears me play is the best person I could have hoped for

Ryan: The world. We’ve had small moments at some of our shows on the road where some new faces have bought our merch and had us sign some posters. Those moments make us feel like we’ve made it for 5 seconds. We’ll always treasure and savor those moments

Arthur: I busted my knee pretty bad in a mosh pit like 4 months ago to our friends band Maintenance. I had a left knee cap derangement, I was out of work for some time & needed surgery, physical therapy.

Arthur: Ryan without a doubt, but that’s my boy

Conor: Sloth. Can never get shit done and the laziest group of bastards you’ll meet

Ryan: Probably a human centipede. We all work together