Courage My Love take on the A-Z challenge!

Canadian sweethearts Courage My Love are back in the UK for their run of dates with As It Is later this month. We asked the trio to take on our A-Z challenge so that we could find out more about them! A song that made you want to make music? This is a total cliche, but when […] 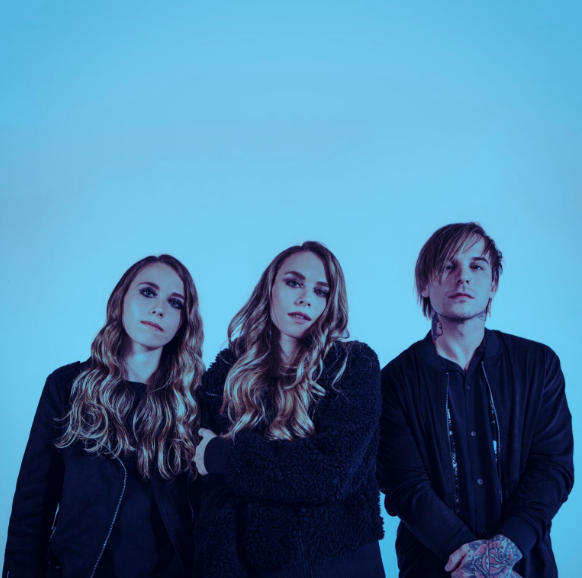 Canadian sweethearts Courage My Love are back in the UK for their run of dates with As It Is later this month. We asked the trio to take on our A-Z challenge so that we could find out more about them!

This is a total cliche, but when we were little and driving around in the back of our parents’ van I always remember them putting on Janis Joplin and something about her voice and her passion and aggression when I heard her sing “Take Another Little Piece Of My Heart” lit a fire in me that hasn’t gone out since.

We have things on our rider that we never expect to get, like towels, batteries, beer, pizza, etc but I’ve gotta say whenever we play any sort of government funded event like a festival etc we seem to get AMAZING riders! I’m talking tea, veggie platters, subs, you name it! Thanks, government!

Too many to mention haha every moment is crazy. I think one of the weirdest / coolest moments that we’ve had as a band was the first time we went to Japan and we went shopping in this mall, exploring etc. When we came outside there were fans waiting for us with their CDs to sign. We don’t know exactly how they knew we were inside, but we were absolutely DELIGHTED! It may not seem like much, but for a young band on the other side of the world for the first time it was pretty insane.

I always loved the lyrics “If you need someone, I can be someone”. I don’t think they are particularly “deep”, or cerebral, but I’ve always liked it because I feel it works on many levels. In the song it’s meant to have a romantic context, but it can work with friendships as well. I love singing it to our fans, because we truly mean it. We are there for them, always, if they need us. It’s one of those phrases that can even be said to yourself in the mirror when you are low on self esteem. I think it’s a lyric that means different things to different people. It’s meaning changes depending on what you’re going through in your life. It’s meaning has definitely evolved for me personally.

I love songs that just FLOW out of you. Remission was one of those songs! I felt like we didn’t overthink it or change much about it. We wrote it in an afternoon. It feels as though you’re being beamed up by aliens and the inspiration aliens are somehow speaking through you. It’s like you’re being possessed by an inspiration ghost. It felt completely honest and natural, like something we’d wanted to say for a long time that finally just came out.

It changes all the time. That’s like asking “Which child is your favourite right now?” I can’t answer that or the other songs will get jealous.

We love the boys in Chase Atlantic and we’ve been talking about collabing for some time now! Time to make it friggin’ HAPPEN!

I think the hardest thing for me personally is the amount of self I put into our music. I pour everything I have into each song we write. I find myself defining who I am through the band, which I know is unhealthy… but I can’t help it. If we put out a song that I love like a child, because it came from me and I see so much of myself in the song, and I see negative or hurtful comments online about the song, I can’t help but take it personally because in a way that song is ME. I also find myself questioning my self worth when I’m not creating, which I think is every artist’s curse. We’re always trying to top ourselves and keep evolving and getting better. We’re never just satisfied with where we are. So while most bands would probably tell you that they dislike being away on tour for long periods of time, we would probably tell you the opposite. When we’re on stage everything feels easy. It’s when we’re home or in the studio and have this constant pressure to keep creating music that only gets better and better that I find hard. But I always remind myself that my WORST day in the band is someone else’s BEST day. We’re really lucky to do what we do and to have this creative outlet and so much support around us. We’ve just got to block the negative voices out and focus on what’s really important… what got us here… the music.

Lockwood can literally make grown women throw up with his farts. True story.

Again, way too many to mention. We always find a song that becomes our “theme song” for every tour we go on, and sometimes it gets a little out of hand… there are songs that will forever haunt my memory and things I will never unsee.

If I knew the “key to writing a song”, I’d be Max Martin. For us, we just try to write from the heart and always grow with every song we write. Right now I’m really obsessed with groove. A song that makes people bob their heads and tap their feet had an undeniably good vibe. I want people air drumming and dancing whenever they hear one of our songs. So LATELY that’s been our goal in terms of songwriting.

Our show in Tokyo was literally as far away from home as we can get without leaving planet earth.

Seeing Deathcab For Cutie live with an orchestra blew my mind. I was standing, clapping and crying simultaneously. They have such control of their dynamics. They take you on a journey. That what I’ve always aspired to do on stage! It’s like magic watching them perform.

You MUST check out our friends in Romancer! They are inventing a new genre of music I SWEAR.

I think it’s every female fronted band’s dream to open for the likes of Joan Jett. She is an inspiration. I just want to say thank you.

We STILL haven’t gone to Brazil, or anywhere in South America yet. We’ve always wanted to and the fans have been so patient. We are gonna work our butts off to make it happen.

“Be yourself. Everyone else is taken.” – Oscar Wilde

Our song “Remission” is about healing from a damaging relationship. We chose that title because sometimes healing can feel like an uphill battle. It’s not a straight path up. You are likely to fall down a few times on your way. The song is about wanting to move on, and being frustrated with yourself for still battling feelings for someone who’s hurt you. In the end, though, we all want to get better. We all want to heal. In this case going into remission isn’t about being physically ill, but getting stronger as you distance yourself from a toxic person.

Our next tour is across Europe and the UK with As It Is, Trashboat and Holding Absence! Come hang!

NO. I don’t think they are better or worse. You can’t decide where music goes and what will inspire future generations. We don’t get to choose what younger people feel connected to. I think every generation has this sense of rebellion because the older generations are telling them that their taste is crap. New doesn’t always mean better or worse. It just is. We don’t get to stay in one time period forever. The only thing that IS constant is change. If you try to stand still and not move forward, you get left behind. We shouldn’t be so afraid of where things are headed because they aren’t familiar to us. Instead we should try to pioneer where we go. Not that you can’t look back and be inspired by older music. That music will always be there. That music is the artist’s legacy. I’m really excited to see where music goes and what new genres and sounds will be invented. We can thank “the old days” for inspiring new ones.

We’ve got CML pillows for sale on our Merch store and let me tell you they are comfortable AND stylish.

I always want to re-track my vocals, especially on songs we did when we were 16-17 years old, BUT I also like those tunes and my performances on them because they are like a snapshot in time of where we were in our lives. To redo them now would totally defeat the purpose. We might as well just focus on making something new and keep growing as a band. NO RAGRETS.

EVERYTHING. Without them we wouldn’t have a reason to travel the world and be up on stage. We’d just be making music in our basement for ourselves. The most beautifully validating feeling in the world is talking to someone who understands your music and has been affected by it emotionally. If they understand your music, they understand YOU on some level. Maybe on a level that most people will never understand you. So yeah, I always feel exceptionally close with people who tell us our tunes got them through a rough time, because I know EXACTLY what they’re talking about. The music did the same for me. I can relate to them the same way they can relate to me.

Lockwood almost breaks his neck on every tour because he rocks out like crazy, and Phoenix never drinks enough water. I am constantly sick and I can’t tell if it’s all in my head or not. My backpack is a constant street pharmacy. We need to be looked after.

Either Phoenix or me. We have no concept of time whatsoever.

We’re like Lucy the chimp. We have a lot to say, but are only able to speak with the humble tools provided to us. We are misunderstood, and far more intelligent than we look. We also love bananas.