Colours of One take on the A-Z challenge

Our A-Z challenge is a fun way to get to know the many bands and artists around here. Today its the turn of Mike from Bridgend rock band Colours of One to tell us all about the band. 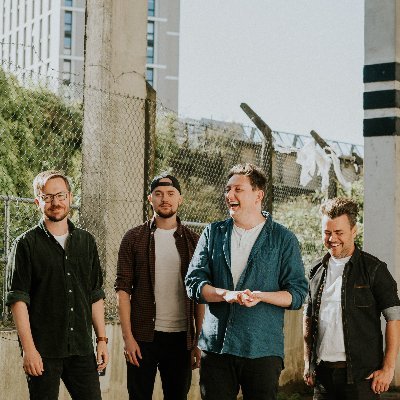 I was obsessed with the 90s US teen sitcom ‘California Dreams’, which followed the lives of members of a high school ‘rock’ band of the same name. Genuinely, that show was the trigger for me, so I’m going for the ‘California Dreams’ theme tune. However…Plot twist… I recently discovered that they couldn’t really play their instruments! I have been living a lie for 25 years.

Pizza. You cannot go wrong with pizza…. Unless you put pineapple on it.

In Bridgend, where we’re from, there used to be an annual event called the Gambo Races – essentially a fancy dress pub crawl, where participants wheeled handmade carts (Gambos) from one venue to the next. At the final pub they put on a sort of outdoor music festival in the car park, with bands playing on the back of a lorry. One year we were the headline act and pretty much immediately after we finished our set violence erupted – unrelated I’m told. Riot police were on the scene. It was carnage, people were fighting and throwing things. I have never experienced anything like it. We were just sat there on stage watching it all unfold in front of us. It felt pretty surreal. We had to wait for the police to clear the place before it was safe for us to starting packing up.

On the other side of the coin. It was pretty crazy when we found out that our music video for ‘Echoes’ was going to be played on Kerrang!TV. That was a dream come true.

This is a lyric from the chorus of ‘We Take Care of Our Own’, which was written as a response to the ‘we should be looking after our own’ brigade who bemoan any kind of charity or even compassion that goes beyond national borders. Borders that are ultimately man-made and impermanent.

‘Runaway’, hands down. It was jammed out in rehearsal and within 5 minutes we had the song pretty much as it is now; chords, structure, melody, and most of the lyrics.

Currently we’re torn. We really enjoy playing a track off our first EP called ‘RLD’, especially on the occasions when we break down the middle 8 and get the crowd singing along – that’s always special. But also we have an unreleased song called ‘Bones of Hope’ which will feature on our upcoming album that we absolutely love. It’s got everything you’d want from a Colours Of One song, intricate melodic verses, big chorus with solid harmonies and some tasty riffs to boot. Can’t wait to release that one.

I think we would all love to work with Conor Mason from Nothing But Thieves. Conor is phenomenal! I struggle to find anyone in our genre that comes close to him as a vocalist at the moment. Writing and recording a song with him would be a dream.

Having to balance it with day jobs at the moment.

I once auditioned to play Milky Bar kid. Oh how things could have turned out different if I’d got that part. I could be appearing in one of those “You’ll never guess what they look like now” click bait articles.

I have unwittingly birthed an alter-ego by the name ‘Mike L Chuggs’. For another unreleased song called ‘Nail in the Cause’ I tracked some chugging guitars, and labelled them Mike R Chugs and Mike L Chugs – to represent that they were my takes, they should be panned right (R) or left (L) in the mix, and they were guitar ‘chugs’. When it came to import these takes for mixing the take labelled ‘Mike L Chugs’ was missing… so my wonderful band mates decided to make him by putting a press shot of me through FaceApp: 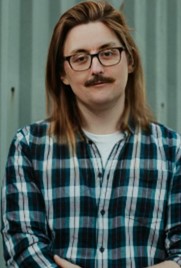 Mike L Chuggs now frequently pops up in our band WhatsApp space, much to my delight.

For us the key to writing is collaboration. We’re not one of those bands that have a main songwriter, it’s all about collaboration. Every song is a Colours Of One song rather than a Miff song, or a Lewis song etc… We all write individually, but bring our ideas to the group to work on together. They could fully formed songs already or just individual parts. There have been lots of occasions where someone has brought an idea and someone else says “what about doing X / what about adding Y”, and suddenly the idea takes on a new form, and really opens up. I think we work really well together in bringing out the best in each others song ideas.

We travelled up to Edinburgh to play a show as part of a UK tour back in 2010 (I think). That’s 420 miles from where we’re based. Unfortunately when we turned up at the venue we discovered the promoter had double booked the venue, with Jonah Matranga also playing a tour date on the same night. As part of the agreement we were also meant to be staying in the flat above the venue – which had also been double booked with Jonah staying there too. Luckily for us, Jonah is a thoroughly decent guy and he let us open his show, and stay in one of the rooms in the flat, so not all was lost.

Chris Cornell for myself and Miff. At the top of his game he was the greatest vocalist of all time and a phenomenal songwriter. Josh Eppard from Coheed and Cambria for Paul, not only is he an incredible drummer, but the groove, feeling and energy he can bring out of a song gets Paul every time. And Snarky Puppy as a collective for Lewis; experiencing so many incredible musicians at the top of their game on one stage at the same time with an amazing sound blew his mind.

BAXTR – all female alt pop rock group from London. Discovered them after our single ‘Runaway’ was played on the same radio show as them. Blew me away. Seriously good songwriters and very nice people to boot. So check them out.

Pearl Jam. Huge band and a big influence on us, it would be an absolute privilege… and they occasionally bring support acts back on stage to play a song with them during their encore.

Right now, anywhere, we would love to get out of the UK, see some of the world… even from the inside of a van.

“We have an oven ready deal, put it in the microwave as soon as we get back after the election on Friday 12th Dec and get it done.”
How’s that working out?

‘Haunts’ is a song about the hypocrisy and lies of people in power. I think when I originally wrote the lyrics I was more optimistic that these words and actions would come back to haunt them and they would be held to account. Unfortunately, for the most part they still seem to be getting away it.

No, I think the quality of music is broadly similar; we can tend to rose tint the past; for instance you could say 1991 was a phenomenal year for music with Nevermind, Ten, Badmotorfinger, and lots of iconic albums being released. The same year in the UK, one of the highest selling songs was ‘I’m Too Sexy’ by Right Said Fred. There has always been absolute dross that does well.

We’ve been fairly conventional when it comes to merch. I supposed the most unusual merch we have are handmade keyrings that we sell at shows. We’re open to any suggestions from the readers – tweet us @coloursofone.

We’re actually working on a sort of chilled version of a track called ‘Bloom’ off our ‘Apparitions’ E.P. Hopefully we’ll get to share it with everyone very soon.

We love what we do and are very proud of the material we have put out to date. The fact that we have been able to make a connection with other people through our music is a privilege that we will never stop being thankful for.

Lewis once had an ear plug part disintegrate in his ear. Someone had to fish what they could out with a set of tweezers. Grim.

We are never late for a show. The promoter must have given us the wrong time.

A giant tortoise. We’ve been around forever, and we have been known to take our time with things, especially new releases… We also have no natural predators and are impenetrable to attack.