Chinese Missy Chat With Us About The General Election, Download Festival and Their Plans For 2015!

Chinese Missy released ‘Blood On Your Hands’ recently in conjunction with the 2015 General Election leaders debate and we had a chat about that track, what it was like to play Download Festival and what plans they have for 2015. 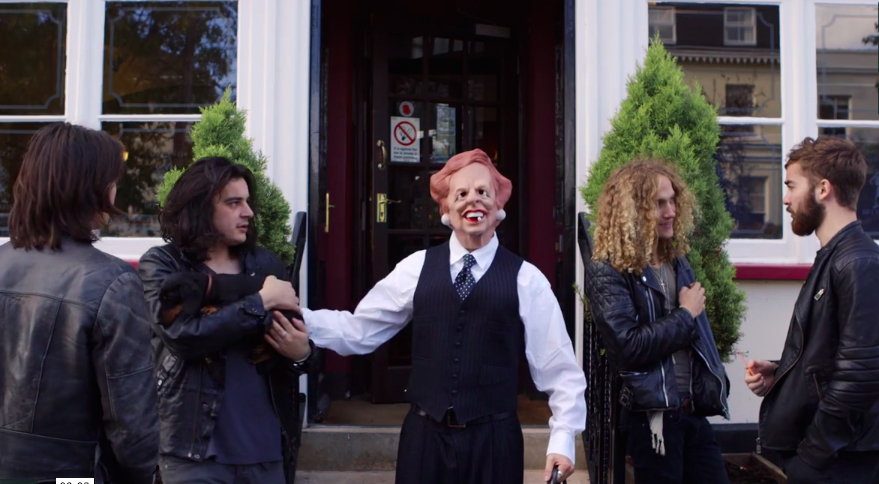 Chinese Missy are a four piece band from London, playing a unique brand of trashy rock n’ roll. Since forming in 2012, they’ve had a lot to say for themselves. Last summer saw them take to the stage at Download Festival, backed by Red Bull Studios London. They also released their debut single, Kickin’ About, and the accompanying video, which reached No. 20 in the iTunes rock chart and has received airplay on BBC Introducing. Chinese Missy released ‘Blood On Your Hands’ recently in conjunction with the 2015 General Election leaders debate and we had a chat about that track, what it was like to play Download Festival and what plans they have for 2015.

Hello Chinese Missy! How are you?

Hey! We’re brilliant thanks! New single out! So all things are pretty buzzing in the Missy camp, how are you?

We are good thanks! You seem to have been busy recently with the release of your second video ‘Blood On Your Hands’… What is this song about?

It’s about politicians and how they never take responsibility for anything. In particular it’s about the bunch who (with a bit of luck) are about to vacate government.

Can you believe that we have record numbers of families getting their food from food banks, old people unable to heat their homes, students working in lap dancing clubs to pay fees and still the rich just keep on getting richer. The best bit is, these same people have the cheek to stand for re-election and people just don’t seem to hold them accountable. It either makes you want to puke, or go out and buy our single!

What can we expect from the music video?

It’s mainly a laugh mixed in with some serious comment. The whole thing is shot in a gentlemen’s lavatory- that is where most of them should be.

You have been showered with praise since your formation, most notably for your style and swagger but, how would you describe yourself?

Well, I think we must have missed the praise showering bit, but thanks anyway! Haha! We are a rock and roll band who we hope have got something to say for ourselves. If people are enjoying themselves dancing along to our music they might also listen a little closer and hear what we are trying to say. It’s a bit sad really that today the closest we get to a revolution is people swapping their iPhones for androids!

For someone who doesn’t know Chinese Missy, how did you guys form and why ‘Chinese Missy’?

Well Tommy L’Heart and myself (Bello) had busked together since we were teenagers and used to play in different bands in the same town. When both of our respective bands split up around the same time we looked at each other and said why not? Rich our guitarist was someone we had known for a while and he was looking for somewhere to create a noise and that was the original nucleus. Our drummer Tom Moore is the fourth and final occupant of the drum seat, until Tom came along it was all a bit Spinal Tap with drummers disappearing in the strangest of ways. Probably best not to say too much about that as a file is still open with The Metropolitan Police regarding drummer number 2 and his disappearance!

You played Download Festival last year, how was that?

Absolutely incredible, we love festivals and Download was just about the friendliest place a band could play. Having written and played most of our songs in sweaty clubs and tiny rehearsal rooms hearing them ring out in a tent that big was something we can’t wait to do again! The organisers, fans and other performers were unbelievably friendly and up for a good time. We even had our first circle pit, of sorts.  We stayed the whole weekend and loved every minute of it, made some good friends and are stoked to make it back as soon as we can!

What are the plans for this year?

Well after Blood has gone to Number 1 and the World is at our feet we are playing a couple of festivals, including Camden Rocks at the end of May, writing new material and hopefully recording a few more songs with Mr Mike Spink, who produced Blood and our debut single Kickin’ About. Mr Spink says we are the best act he has ever worked with apart from The Arctic Monkeys, The 1975, Jake Bugg but we think that’s just him name dropping.

What is your all-time favourite album? (each member!)

Tommy L’Hart – anything by Kylie or The Sugarbabes

Watch ‘Blood On Your Hands’ Here: