Chatting To Creeper at Slam Dunk

We sat down with Will Gould and Ian Miles frontmand and guitarist/vocalist respectively of Southampton goth punk sensations Creeper before their set at Slam Dunk Midlands to talk The Stranger, how Ian really, really, really likes playing Astral Projection and America. 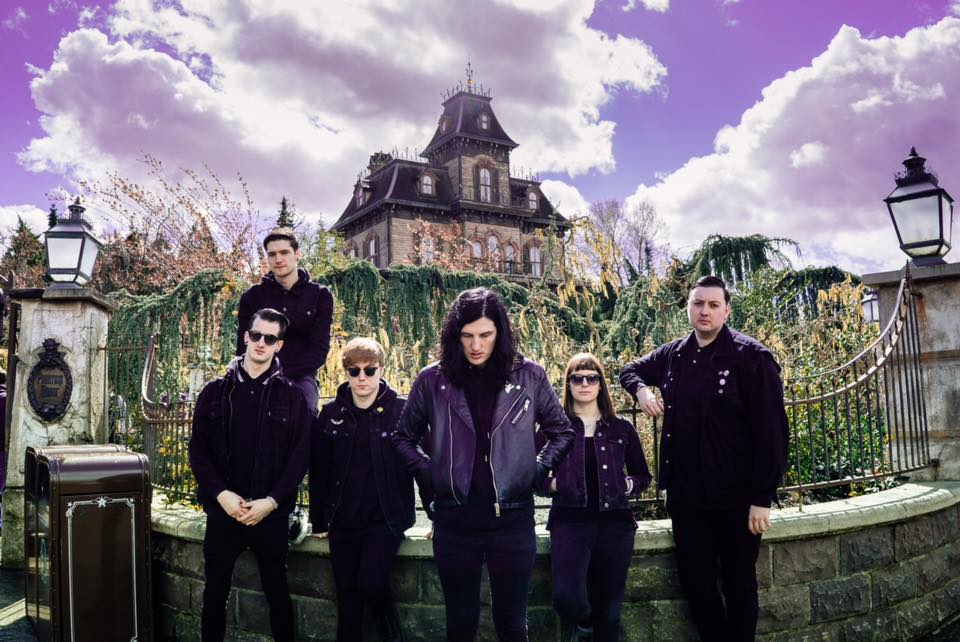 We sat down with Will Gould and Ian Miles frontmand and guitarist/vocalist respectively of Southampton goth punk sensations Creeper before their set at Slam Dunk Midlands to talk The Stranger, how Ian really, really, really likes playing Astral Projection and America.

Last time we spoke, you were just about to release The Callous Heart EP and now you’ve just released The Stranger to rave reviews. Are you pleased with how it’s been received?

Will – Yeah I think so. We try not to take so much notice to what people are saying about our band, good or bad because I feel like it kind of impacts the writing process but it’s been quite impossible not to notice how nicely it’s been received. I think overall, it’s a lovely feeling to know that something you’ve spent a lot of time working on has been received well.

How did the idea for the Stranger come about? I know it’s kind of a concept record but the whole imagery of it? Because it’s really creepy.

W – That was kind of the whole point wasn’t it? We wanted to make it creepy (both laugh). It was supposed to represent another character in the Peter Pan story that was supposed to represent time, so we wanted to make something as visually striking as possible. To show how terrifying time is to people our age, with time ticking away and so we spent a lot of time on it, we referenced a lot of the imagery from when we were younger that we were scared of. For you (turns to Ian) it was the Exorcist.

Ian – Yeah the demon from the Exorcist and there was No Face from Spirited Away, there was a reference of that in there.

W – There was a bunch of stuff like The Babadook was a really big film for us and is referenced on the record. It had to be visually striking and terrifying because the concept of the subject matter on the record is.

You’ve been very busy so far this year with touring, how was it visiting Europe for the first time as a band?

W- It was wild, because we hadn’t been there and they were really grateful for us to be there and a lot of kids came to see us as well. It was really great and we got quite a lot of gifts and things.

I – I was looking forward to going back to Europe for so long because in our last band Our Time Down Here, every time we went over to Europe, you just get treated so differently over there and it’s nice to reach a whole new group of kids that respect you as much as they do in the UK, But in terms of the show, they treat you really well and they take you in as part of them. It’s really, really nice over there, it’s a different vibe completely.

You did your first proper headline tour this year, how did that feel because quite a few dates were either sold out or very close to selling out?

W – I think we weren’t really prepared for how successful that tour was going to be, we just kind of thought it would be fun to do and to take our friends out and to have everything on your own terms as well. Like to be able to choose your supports, it was a really magical experience and we realised the dedication our fan base has as well. It was really heart-warming to see the community that’s built around the band as well and that’s one of the things we’re most proud of.

What’s your favourite song to play live and why?

W – I think it’s difficult to summarise one song, my favourites are parts of songs. I like the bits that are a little off-kilter for a punk band to do. I like when we get to experiment doing those bits live, like some of the kind of the pastiche from fifties music that we hear. I enjoy those kind of sections of the song. I enjoy the songs the most where we don’t seem like a standard punk band so I guess Astral Projection’s great because I love the ending. I like the newer ones better than the older ones.

You’ve just announced a North America tour and an appearance at Riot Fest, are you excited to get out to see your expanding US fan base?

W- I don’t know, that’s not a thing that’s like a conscious thing. Obviously it feels like the band’s growing because we’re playing bigger stages but we’re not like ‘oh God. We’re growing so quickly’ because we’re so concentrated on writing the music and just creating things but the fact that we’re going over to America is like a dream come true.

I – Like a total dream come true. You never imagine that when you’re starting a band that that band is going to take you over to America. It’s phenomenal isn’t it, it’s crazy. I mean, I would go over there, even if you told us that we weren’t going to make any friends over there or that we weren’t going to expand in any way, I would still do it because it’s an opportunity of a lifetime. And to play our songs to kids in another land across an ocean is just incredible.

You’ve been nominated for a lot of awards this year as well (Kerrang! Best British newcomer, Metal Hammer best new band Golden God, AltPress APMA for best underground band) I know you said you don’t really think about those things, but you must be quite proud about being nominated for them?

W – It isn’t something which really enters our consciousness a lot. Obviously it’s very flattering, it’s something that you never plan for, especially a band like us with kind of small town roots, it seems impossible but I guess I’m proud of the songs and I’m proud of my friends and I’m proud of those things. If we won one of those awards, I’d be immensely proud of my friends and the group that we’ve got together, rather than being proud of us individually. It’s an incredible honour to be nominated for those things, especially when its fan voted as well, like our audience really wants us to succeed and that’s incredible.

Do you have any more plans for this year? An album maybe?

We always end with a couple of random questions. Are you ready?

W – Overcast. I think it’ll be sunny and breezy.

I – Sunny with a chance of rain

What would your chosen topic be on Mastermind?

W – I’d have a few, I’d probably be pretty good on UFOlogy, like the study of UFOs. I think I’d be quite good at theme parks like Disneyland.

I – I think mine would be on Metallica, I think I’ve got a good knowledge of Metallica. Oh and Elliott Smith, two musical acts but yeah probably Metallica or Elliott Smith.

Both – Live without a computer definitely.

I – Metallica, Reload on cassette

W – You’re welcome, thanks for having us.