A chat with Glam Skanks

They’ve been taking the world by storm and we wanted to get to know more about Glam Skanks so we asked them to tell us all about themselves! Can you tell us a bit about how Glam Skanks came about? It’s not very often you see what is usually classed as a derogatory word used […] 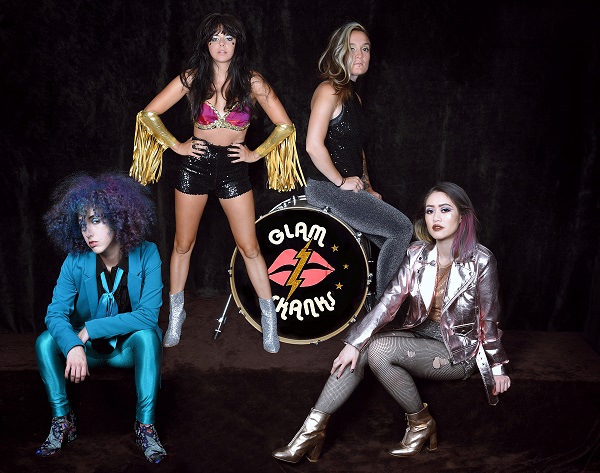 They’ve been taking the world by storm and we wanted to get to know more about Glam Skanks so we asked them to tell us all about themselves!

Can you tell us a bit about how Glam Skanks came about? It’s not very often you see what is usually classed as a derogatory word used in a band name!

Ali Cat: Veronica Volume and I started the band about five years ago. We met on Craigslist both posting similar ads in search or starting a girl band influenced by David Bowie, New York Dolls, Queen etc.. The name Glam Skanks came about because we had our first show coming up and we were desperate for a name. It started out as just temporary actually, but ended up sticking because it totally fit our image. Glitter, boas and platforms for the glam appeal and fishnets and attitude that was kinda skanky. Skank is just a word to us, it fits the style … a bit rebellious. The word only becomes negative if you give it that power.

Apparently Millie was unsure on joining the band until she was taken to a drag night at a stripclub, how did this change your mind?

Millie: The only reason why I joined this band was because they took me to a drag strip night with a potato-peeling, costume-wearing dude in the middle of the runway between strippers.

GS: Well there was definitely some years in between those shows. It was necessary (and still is) to play shitty bars, random laundromats, warehouse gigs, wherever we can. All of that experience has led us where we are today – touring and opening up for Adam Ant on three successful tours in North America and the UK.

And we wouldn’t say it was so much of a “rock n roll” laundromat, but we definitely turned it into one that’s for sure!

You’re set to play at London’s The Roundhouse towards the end of December with Adam Ant. What are you most looking forward to?

GS: We are always super excited to work with Adam’s band and crew.. they are some of the best people and we have learned a lot from them. And then of course we are looking forward to getting the opportunity to play on the same stage as so many legends. Can’t wait to rock it for you all.

You’ve had some crazy experiences on tours, can you tell us about a couple?

GS: In England we did have a lot of haunted experiences. Being from California, we aren’t used to being around so much old architecture and history. We stayed in an old pub/hotel that had a very weird vibe. We found blood stains on our wall and our door didn’t lock. We ended up sneaking out at like 2:00 in the morning. We’ve also had a lot of van malfunctions from tire blowouts on the highway to, most recently, an entire door of our van came off! We’ve also driven through EVERY weather … sweating from humidity, evacuating from a hurricane in Florida, dodging wind and tumble weeds in the desert, driving through black ice and sliding on the road in Canada and now driving through Spain where it’s snowing. Any weather, BRING IT ON! Glam Skanks won’t miss a show.

There are not many all-girl rock bands around sadly, why do you think this is and how do you think the music industry could and should ensure that more women take up positions in rock bands?

GS: Unfortunately, the industry is dominated mostly by men, especially in rock n roll. It’s sad that women aren’t taken as seriously as men in taking on this way of life. We are raised in a generation of talentless, mindless, reality star, social media dictatorships. Women are brainwashed by social media to be perfect, pretty and “ladylike”. And none of those words really go with rock n roll. It may not be mainstream, but we are for sure seeing more women getting into playing instruments and letting their hair down. Girls come up to us after shows and say they want to play electric guitar or start their own girl band and we think that is so awesome. We want to inspire women and let them know that anything is possible.

We always end with some random questions; can you tell us an embarrassing story about a member of the band?

Ali Cat: When we were on tour in the UK, I had a big wardrobe malfunction on stage at The Monarch in London. It was halfway through the first song and I felt my top totally snap. I was holding up my top for about two songs until our roadie, Sam, finally saw it. He came onstage with a cable and duct tape and proceeded to “fix” my top while I am still singing. It didn’t work very well because it broke again. Getting very creative, Sam took one of his large t-shirts, ripped it so it would be my size and I threw that on. Finally, after 10 daunting minutes, I was back to rockin.

What one song made you want to make music and why?

GS: Probably any David Bowie song because he is a creative genius and so original.

You could have any artist cover one Glam Skanks song, who would you pick and what would they cover?

Unfortunately probably every artist we would want to cover one of our songs has passed on … so we will go with ABBA. We would want them to cover “Bad Bitch” … make it a disco cover, maybe?