Break Out Day take on the A-Z challenge 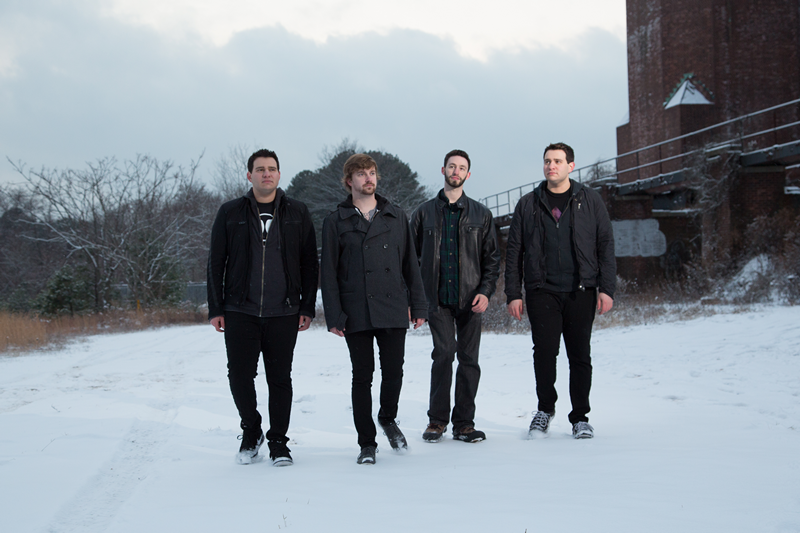 Following the release of their new EP Echoes Of The Past, we asked Break Out Day to tell us more about themselves by taking on our A-Z challenge!

We haven’t had a rider.

We played a show at a Bowling Alley last year and things got a bit hectic before our set. We found out that the band that was supposed to play before us was now playing after us because one of their members wasn’t going to make it on time. Andrew, Perry, and I were already there and Brandon was stuck in traffic while we had to start setting up, so we were all getting nervous and I set up his gear for him. As that’s going on, we’re being told that we’re cutting into our set time which made us all a bit frustrated and even more anxious about the situation. Eventually when Brandon showed up and we started the set, he got shocked by the microphone and Andrew’s bass amp wasn’t producing any sound for a good chunk of our first song. The whole thing was pretty hectic and crazy and we like to joke about it now.

The lyric “Opened up countless eyes to years of endless vision” in our song “The Party’s Over” carries a lot of meaning for us because the song is about wanting to take control of your life and make your dreams a reality. That particular lyric refers to how far the band has come since Andrew and Jason first decided to start this band while in high school. It’s a reminder to both our listeners and ourselves to keep going and open up as many people as we can to our music.

On our first EP “The Nights That Made It”, our song “Your Halo” came together quickly both lyrically and musically, so that was definitely an easy writing experience. On our new EP “Echoes of the Past,” the track “The Party’s Over” was probably the easiest, albeit it wasn’t entirely easy either. We had been working on it for a few years before Brandon officially joined. It just seemed to take longer to get the verses where they needed to be melodically and lyrically.

Jason: “The Party’s Over” is currently my favorite to play. I like that it’s both fast and heavy and it’s a great song to start the set with.
Andrew: The Party’s Over is currently my favorite.
Brandon: Deleted Imagery. Jason and I switch between playing lead and rhythm guitar during parts of the song making a bit more fun to play.
Perry: It changes constantly, but I’d say right now it’s “The Party’s Over” since it’s the first song in our current setlist. It’s also the most physically demanding, which is nice because I get to challenge myself right from the start.

Jason: Alex Gaskarth from All Time Low. We’re huge fans of All Time Low and he’s immensely talented.
Andrew: Patrick Stump from Fall Out Boy. His vocal talent is amazing and he’s one of my favorite songwriters.
Brandon: Deryck Whibley. He’s been a major inspiration to me and I think working with musically would be a blast.
Perry: Demi Lovato, Hayley Williams, or Lynn Gunn from PVRIS. I’m a sucker for female vocals.

We don’t get to have full band rehearsals as often as we’d like to due to all of us working full-time and Brandon living in Brooklyn. It’d be tough and expensive for Brandon to travel from Brooklyn a few nights every single week. So, we do our best to work around that by rehearsing most weekends by meeting up on a Friday and/or Saturday.

Brandon is the only one of us not from Roslyn, New York. He is from Slinger, Wisconsin and currently resides in Brooklyn, New York.

We all like to quote and mimic movies and television shows. South Park, Family Guy, and Beavis & Butthead tend to be the most frequent.

The writing process for any song can be different. It’s important to not get in the way of your own song. You don’t want to force certain lyrics, instrumental parts, and/or melodies into a song as an attempt to finish writing a song quicker. It’s also important to have patience because the process can often be frustrating.

We played a show on the Syracuse University campus in April 2017. That was over 100 miles further than a show we played in Hawley, Pennsylvania the same summer.

Jason: Tom DeLonge has been my biggest inspiration. His work in blink-182, Angels & Airwaves, and Box Car Racer really opened me up to how far an individual can take his or her music. His ability to constantly redefine himself has always been something I admired too.
Andrew: Mark Hoppus. He’s my favorite bassist. His style of writing and playing has been an inspiration to me since I got into music. Lyrically he is a big inspiration for me as well.
Brandon: I’d have to say it’s Deryck Whibley. His battle against health issues and finding new inspirations for himself to continue making music has always kept me motivated.
Perry: Phil Collins. He’s a drummer, a singer, and a songwriter all in one. His talent and contribution to modern pop / rock music is undeniable.

Jason and Andrew: The band Save The Lost Boys are really great. Andrew and I have been friends with the singer for many years and he’s a great guy. Their album “Temptress” came out a couple of years ago and it’s awesome.
Brandon: I really got in to the band Can’t Swim when they debuted their EP in 2016 and their full-length released in 2017 was a fantastic follow up. I highly recommend them.
Perry: In Her Own Words. They’re not necessarily a new band, but Brandon introduced me to them a couple years ago and what they’re doing within the realm of alternative rock / pop punk is amazing.

Europe has a lot of cool venues and festivals that our favorite bands have played multiple times. European crowds always have a good appetite for rock music and we’d definitely love to play there.

Each song on the EP comes from a past experience written into a story. There’s a lot of self reflection in these songs and our EP title is a reference to those constant callbacks from the past that can follow you wherever you go. In a way, every time we listen to or play them, it’s echoing our past.

Our next two shows are May 10th at the Amityville Music Hall in Amityville, NY and our special EP release show on May 23rd at Arlene’s Grocery in New York City.

In many cases, yes, but we would hope the best days of music are still to come.

An acoustic or reimagined version of any of the new three originals would be fun to create and record; especially after going through that process for the “Too Bad You’re Lying” acoustic version.

Our fans mean a lot to us. They are a big source of our motivation to do what we do and why we love doing it. We love interacting with fans at shows, whether it be while we’re performing on stage or before and after our set.

It depends on where the venue is but Jason and Andrew are usually the last two to show up. Luckily everyone has shown up on time so far.