Our A-Z is a fun way to get to know the many artists around. Here it is the turn of Basement League to tell us all about themselves. 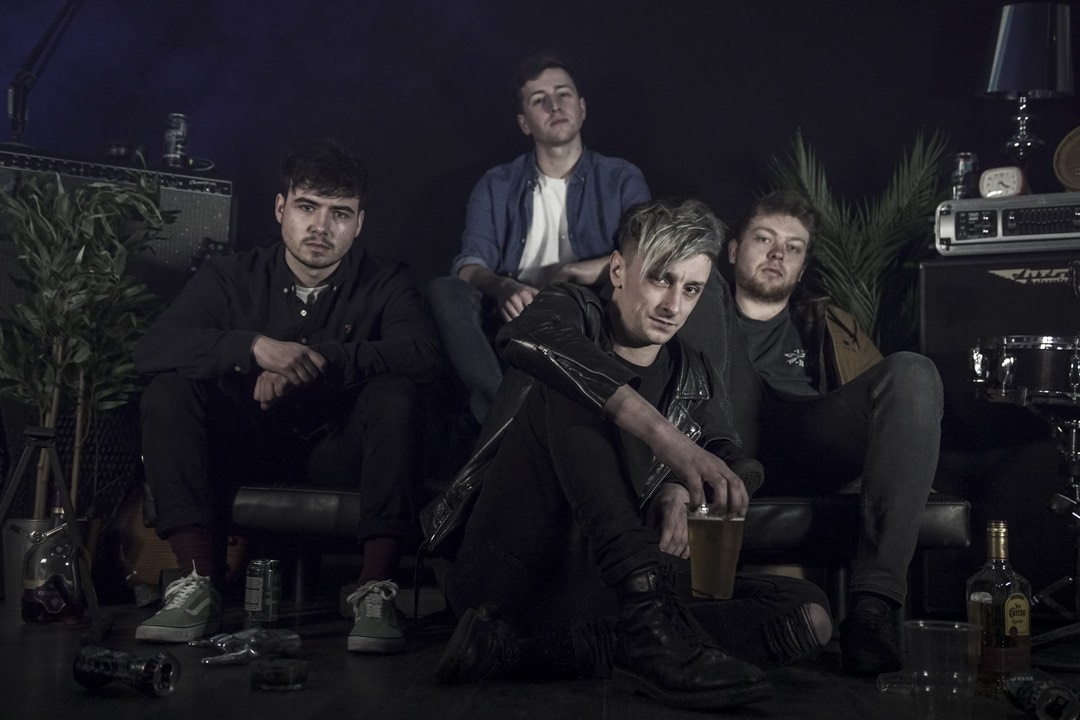 Cameron (frontman): For me the one that sticks out is Waiting For The End by Linkin Park. Such a criminally underrated song and Chester was (and still is) a huge inspiration for me.
James (bass): Wasting Time – blink-182
Nathan (drums): Anything by Biffy Clyro honestly. Their music isn’t too similar to ours but the way they use their instruments and make sounds in ways I feel like I never could have even considered is super inspiring to me.

James: Free beeeeeeerssss
Cameron: Yeah, if you supply pizza and beer though, there’s a 99% chance we love you.

Nathan: Probably when we went on a tour with a couple of bands we’re friends with for a week. Not only that but it started the Monday after three of us had just been to a five day festival. Safe to say we all lost our minds a little bit towards the end!
James: When I almost killed our ex lead guitarist by almost knocking a speaker on to him.
Cameron: Probably when we played a show with another band we’re good mates with. Their bassist is a tattooist and we witnessed their lead singer get quite a questionable tattoo done on his nether region.

James: Old one, but I always liked: “The marks across my chest, match the crosses on your calendar”
Nathan: For me personally it’s probably the whole Juniper chorus. It came out when I was sitting down trying to come up with some ideas for lyrics/melodies and an ex girlfriend texted me a good few months after we’d broken up. She framed it like she was trying to help me, but really it just came across as if she was reopening old wounds for me in pursuit of closure for her. When we finished talking the whole chorus came out in about 5 minutes and I still love it now.

Cameron: We’ve got an unreleased song called Youth of Today. Start to finish it effectively took 6 hours, but we’re so happy with how it came out – watch this space!

Cameron: That’s a toughie! Probably an unreleased song called An Ode… lyrically it means a lot to me and it’s being really well received when we play it.
Nathan: Probably ‘The Infinite Melancholy of Mr Happy’, it always lifts the crowd and Cameron gets everyone to crouch down and jump up when it kicks in and its always a good laugh and set highlight.
James: Juniper

James: Mark Hoppus would be cool,  Mr Worldwide would be legendary.
Nathan: Getting Rob Damiani from Don Broco would be sick! I’m not sure how it would work sonically but we all love that band and have been down the front for so many shows together that it would just feel fitting for Basement League canon I think.

James: Probably getting everyone in the same room sometimes. Keeping a schedule keeps us on top.
Nathan: Loads of time, loads of money for something that’s always gonna be a bit of a pipe dream until it happens. Loads of my friends get to go on a bunch of holidays and all my spare cash goes straight to the band fund. Don’t get me wrong I wouldn’t change it for anything, no matter what happens ill look back on this period of my life with such fond memories of me and four of my best mates squaring up against the world trying to do something impossible.

Nathan: Cameron acted in a recent Pokemon Go commercial with a CGI squirtle that has over 4 million views, so Basement League is actually official Pokemon canon now.
James: I can eat a double cheeseburger in two bites.
Cameron: I had no idea about James’ fact until I read his answers. It’s a pretty cool fact.

Cameron: Far too many to count. You’ve been Gnomed is a classic as well as the Mothman conspiracy.
Nathan: Too many to count! I feel like people who stand around us have no idea what we’re talking about half the time. If its a meme circa. 2010 we’ll probably quote it at some point.
James: The interdimensional mothman. He is real and he is coming.

James: Write to your strengths as a musician but try to push yourself as well. Write what means a lot to you and if you don’t love it, who will?
Nathan: Don’t give up, find people to bounce ideas off of each other and commit to full honesty – leave your ego at the door and agree to not be offended by other peoples input. The song will only suffer if you keep your opinions to yourself in hopes of not offending someone – but make sure its agreed to beforehand otherwise you might end up looking like a dick.
Cameron: Listening to each other, our song writing is a very collaborative process and we’ve found it works well.

Nathan: I’m not the best at geography to be honest but I can tell you we did 650 miles in a week across 6 shows when we toured last year.
Cameron: Rookie numbers but we had a big long drive to Nottingham once to play a Battle of the Bands in Selston. 4 Hour Drive.

James: Red Hot Chilli Peppers were incredible, stupidly good live.
Nathan: Biffy Clyro again. Watching them perform is honestly a masterclass in how to be on stage.

Cameron: Gotta be either A New Hope or Erica Drive, criminally underrated dudes.
Nathan: Grayscale are smashing it at the moment. That and Belmont have a new album coming that I’m super excited for.
James: Decay

Nathan: Neck Deep or State Champs just because I think they have the most potential fan crossover (I love the music too).
Cameron: Neck Deep or blink-182 would be a dream come true for me!
James: The Story So Far

Cameron: The states. I’ve never been and would love to do a full US tour!!
James: Australia sounds lovely and have Tim tams.
Nathan: It’s always been a dream to tour the US – long drives in a tiny van, eating the food, seeing the sights and getting paid to do it! We’ll get there one day.

Nathan: I wish it was deeper honestly but Juniper was the name of the working demo of the song and we really liked it so we wanted to find a way to work the word into the lyrics so it wasn’t too far out of left field.
James: Juniper was a pretty word I thought of when I labelled the initial demo of it. I named it after professor Juniper from Pokemon black and white, which I was replaying at the time. The name stuck and we wrote it into the lyrics.

Nathan: We’ll be announcing 6 dates in April very soon so follow us on Facebook to keep up with that.

James: Not really, there was bad music then just as there are good music now. People just forget the bad music. Its all preference at the end of the day and it all comes in cycles.
Nathan: I think there’s a complex argument for both sides but I don’t think so personally. Theres some great artists out there currently and everything is built off what comes before. I think we’re moving towards a heavier reliance on technology that wasn’t available in the past which can push things further but also be used as a safety net to not push yourself so I’m not sure if that’s entirely a positive or a negative.

Nathan: We’ve had a bunch of ideas for this, the only one we’ve followed through with are branded lighters. We’ve still got a few left that we carry around with us so if you come to a show say you read this article and you can have one for free!
James: We don’t have anything unusual but I think a basement league lunchbox would be neat. Or a fidget spinner, what happened to those?

James: I’ve always wanted to do a Spanish flamenco rendition of any of our songs really. Or a big sexy grand orchestral number. Either or. Both.
Cameron: I’d love to re-record our songs but with friends from other bands, a big features EP.
Nathan: We’re working on an alternate version of our upcoming song Juniper at the moment actually! Theres no release dat as of now but keep an eye out for it.

Cameron: Everything. Life peaks while I’m performing and everyone that has bought tickets, merch etc is part of that.
Nathan: Anyone that buys a ticket, t-shirt or just listens to the music honestly blows me away. All I really want to do is elicit the same way my favourite bands make me feel in other people and when I see that happening its incredible.
James: My mother means a lot to me.

Cameron: Nathan is a silly boy and broke his finger after he fell down some stairs and obviously, having a working hand as a drummer is quite important. I couldn’t possibly comment on whether or not alcohol was involved…

Nathan: We all like to eat, so any one of us really could have dragged the others out to get food before a show and stayed a little too long. We try to always watch the other bands on the bill though to show support so luckily I don’t think this has actually ever happened before.
James: Nathan, unless dinner is involved.
Cameron: Nathan.

Nathan: Maybe a wolf (do they have those in zoos??) The whole point of Basement League as a name is to be a community or a pack for people to draw strength from each other. Life is hard and we’re all in the Basement League, we might as well own it and unite to come out on top.
Cameron: The Duck Billed Platypus. It’s a Mammal but different. We’re ‘pop-punk’ but different, in what we think is a strange and interesting way.
James: Idk penguins are pretty sick.