Avoid take on the A-Z Challenge

Our A-Z challenge is a fun way to get to know the many bands and artists out there. Here it’s the turn of Avoid to tell us all about themselves! 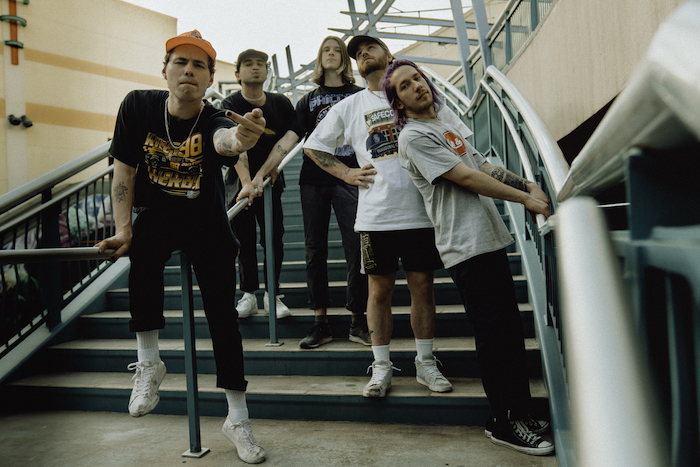 American Idiot by Green Day. I remember being like 6 years old and seeing that music video, and then I watched some live videos, and I was hooked.

Back in 2019 we were doing a headline tour and played The Masquerade in Atlanta, GA for the first time. We had never had venue made catering, until then! That shit was crazy. It was like a real ass chicken dinner with veggies and the whole nine, and they had vegan options, it was amazing!

There’s a few that come to mind! I’d say the first thing that comes is when we got selected to have 2 songs in the video game NASCAR: Heat 5. All of us are huge racing fans and getting our foot in the door of that sport was so cool. A close second would be hearing ourselves on the radio for the first time. Our song Song About James got picked up on SiriusXM Radio in 2020 and that was something we never thought we’d see / hear in our lifetime, that was a pretty incredible moment.

It’s tough to pinpoint the deepest, but one that I like a lot is the start of the COWABUNGA chorus. “All alone. You can’t find me anywhere like I want you to”. To me this describes my anxiety, and how my brain can go back and forth from wanting to be in the spotlight and others wanting to be as far away as I can get. Another I like a lot is in our song ‘Whatever’ the chorus has “in a room of empty faces don’t go changing”. That song as a whole is playfully poking fun at the tricks and tropes we all know and love from the scene’s past and present, and how we’re all, no matter what, just really trying to do the same shit, those lyrics to me though really stand out.

I’ll hit you with the “artist” answer on this one hahaha, but it’s hard to say. Some songs, or parts of songs come out easier than others, but it’s that feeling at the end when it all works that does it for me, and that can take 10 minutes, it could take 10 years (hopefully not 10 years lol), but you know what I mean. To me what’s really important is just soaking it all in. Anyone that is, or even isn’t a creative, I feel like can relate to this is: it’s not about how long it took to make something, it’s about the journey that gets you there.

I definitely can’t speak on behalf of everyone, but I’ve absolutely loved playing an unreleased (at the time of writing this at least) song called Blast Off! It’s just got a fun vibe, and I think we all enjoy playing it together. It’s great to just hang with everyone on stage and play that one.

Hmmm, I mean damn so many right?? Haha. I’d have to go with Tom Delonge, Billie Joe Armstrong, Oli Sykes, ZillaKami, Corey Taylor, shit the list could be so long, but that to name a few.

I’d say the mental game is probably the hardest. I think this can be the most rewarding and amazing thing ever, but also it’s no secret this can be really hard and mentally draining at times. You gotta take care of yourself, especially if you’re touring a handful of the year.

Paul can throat sing and it’s the craziest shit ever

Good mindset is key. You’re gonna mess up, and write stuff you hate, like A LOT. It’s important to just keep your head in a positive and confident mindset, and KNOW WHEN IT’S TIME TO TAKE A BREAK!! Literally just taking 5 minutes to get some air and coming back to something can change you entire outlook on it.

We’ve played all over the United States, driven through 47 of the 48 continental US, and even done Canada a couple times! Hoping to keep adding more every year.

Nick and I saw Foo Fighters front row a few years back, I still think about that show to this day. I’ve never met anyone in the band, and RIP to the absolute drum king, but that band collectively has inspired all of us

Let’s see Dead Lakes, Not A Toy, Thousand Below, Thornhill, Downswing, Fox Lake, Distinguisher, Great American Ghost, and so many more but this is what I can think of first haha

I know it sounds so generic to say “everywhere” but I do just really want to see as much of the globe as I possibly can. I’d love to get over to UK / Europe when we have the opportunity, Japan would be really sick, and definitely Australia

I think the coolest thing about it is again if you ask any of the guys they could give you a slightly different answer, but to me Cult Mentality is what it takes to make it at anything you really want in life. It takes mental dedication and giving it all you got. It also means doing it with your friends and building a team around you that you trust, feel comfortable with, and most importantly enjoy being around.

All tour dates at avoidkicksass.org

I don’t disagree?? But I don’t necessarily agree either. It’s all relative right?? In just taking rock, in the 70’s and 80’s you had some absolutely incredible shows, Led Zeppelin, Van Halen, Pink Floyd, the list goes on. We’ll never really have a time like that again, but modern day you still have some of those legacy bands like KISS, Motley Crue, Metallica, etc. that can bring that old school energy with modern day production which I sometimes think can give you the best of both worlds, HOWEVER I think, especially with modern technology and what not, you can absolutely the crazier shit than you’ve ever been able to at live events and that’s pretty special. I guess just keep perfecting the craft, respect what came before you, and fuckin rock you know??

I think we could go crazier in this department. We’ve never done super unusual garments or anything, but we did get to do a collab shirt with NASCAR Xfinity Series driver Joe Graf Jr and that was pretty cool.

I’d love to do a whole acoustic album one day, or at the very least an EP. It’d be super fun to re envision some of our tracks.

Absolutely everything. Gives me purpose in life. It’s absolutely insane to me that I started a band in middle school in my parents garage and it still exists today and we get to like do actual shit. It’s so cool, even still being a tiny baby band it’s been so rewarding. So hey, if you fuck with it, thank you from the bottom of my heart, I appreciate you more than you can ever know.

When I was like 16 and we were in our very early days, I jumped off a drum riser and landed wrong and definitely broke my ankle. The break was so deep that I went and got X rays like 3 different times and they couldn’t see it, so I finally got an MRI where they finally saw the break deep in there. Had to get surgery, it was a whole thing. We actually played a house show in the middle of the woods in the middle of nowhere Washington state when I was in my boot haha, good times.

Crew for sure, those lazy fucks