A Chat With H_ngm_n

Energetic Brighton-based duo H_ngm_n pack a punch that blows away audiences as well as vowels. We took some time to talk to Chris about his views on the DIY scene and future plans. 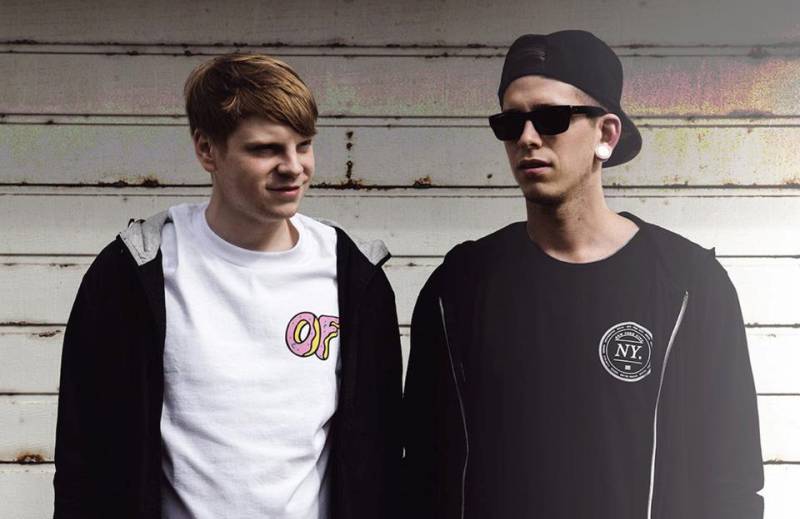 Energetic Brighton-based duo H_ngm_n pack a punch that blows away audiences as well as vowels.

Established from the demise of previous four-piece Echo Rain in 2013, Chris (vocals and guitar) and James (drums) resurrected their partnership to create H_ngm_n a year later. Describing themselves as ‘dirty emo pop’, their easy sound is a mesmerising blend of hooks and interludes, feverishly conveyed live in a frenzy of sweat and motion.

Demonstrating a humble and positive stage presence is a feat that Chris achieves effortlessly. Bridging the gap between pop-rock and emo, this dynamic pair have a powerful angst about them, swimming in an array of innovative drum fills and riffs (that more than compensate for the absence of a bassist.) The two have embedded themselves in a variety of lineups recently, having shared the stage with the likes of rising UK pop-punks Trash Boat and Six Time Champion as well as heading out on the very punny ‘Fiat Puntour’ in August which saw them scale the UK from Leeds to Portsmouth. The new video for track ‘Back at the Start’ (recorded with Tom Adams) encompasses the anxiety associated with growing old too fast. Chris comments ‘the underlying message is that you should enjoy your time and make the most of it, not waste time worrying about wasting time.’ Truly their music speaks of coming-of-age and relatable everyday experience.

We took some time to talk to Chris about his views on the DIY scene and future plans.

Hey Chris, thanks for taking the time out to speak to us about H_ngm_n. I’m sure you’re asked a lot – what’s with the name?

The name is just to fuck people over with dyslexia. James thought it would be well funny, I told him it’s well harsh but he just laughed at me. It cracks us up when people don’t get it. “How do you guys pronounce that?” Just kidding, we actually just wanted a band name to jump on the “drop the vowels from your name” bandwagon. All the cool kids, right? That’s a lie too, the actual truth is pretty boring, but “Hangman” is the name of one of my favourite songs by Motion City Soundtrack, they’re a big influence of ours. There are already bands called Hangman, so we got super clever with it and removed the “a”.

How is progress with the new EP, what can we expect?

So we started recording at the end of last year with a mate of ours, Tom Adams. We did the majority of it in his flat, and having done it bit by bit, it’s taken a while, but it means we’ve had time to get it sounding how we want it. We’ve recorded 3 tracks, all of which are pretty upbeat emo/punk, and they’re basically sad songs with happy(ish) music. Subjects like arguing with a girl, doing stuff you regret and wanting to start again, being scared of getting old etc. basically really honest stuff that I’d like to think loads of people can empathise with. It’s been well fun to record, Tom’s had a lot of cool ideas during recording and he got in on the gang vocals too, all the mates.

What is your opinion of the DIY scene, do you have any favourite bands?

I think we’re pretty lucky being in Brighton, there’s a lot of really cool bands and really cool DIY promoters, it’s great to be a part of the scene here. I promote shows too, so it’s nice that we’ve managed to get to know so many nice people through being in a band. People like Muskets, Water Canvas & The New Tusk are some bands local to us who are definitely worth checking out, but saying that, there are loads. Wild Cat Strike, Broadbay, Haters, The Gospel Youth, Young Attenborough, Glass City Vice, Big Society, I’ve probably missed loads off, but yeah you get the idea. The quality of bands down here is insane, we’re bloody spoilt.

What has been your favourite show to date and why?

I don’t think there’s a show I haven’t loved playing, we’ve managed to play with some awesome bands despite not having any music out, and even if something went wrong at a show, we just love playing. We just did our first tour, and we were playing in places we’ve never played. So much fun being away from home and making new mates. A highlight for me was supporting The Xcerts for our second ever show. It was cool because nobody knew who we were, and having a lot of new people seeing our set was great. Plus the night was sponsored by Jack Daniels, so lots of free booze. James loved it and I don’t even like JD, but free is free. When life gives you lemons, you take those bloody lemons, no matter how much you hate lemons.

What changes would you like to see to improve the local music scene, particularly for unsigned bands?

I guess I’d like to see more people going to shows. There’s a good scene for it, but sometimes I feel like Brighton is oversaturated for live music, so people start taking it for granted and making less of an effort to go out to see a band. I kinda noticed that places with less going on have more people who are willing to go out and check out stuff they’ve never heard of, whereas in Brighton there’s like 3 shows a night. It’s great, but it’s detrimental to itself sometimes.