The Scribes are a new wave hip hop three piece consisting of vocalist/producer Ill Literate, rap monster Jonny Steele and beatbox maestro Lacey whose unique talents have combined to create a much heralded sound quite unlike any other on the scene today. 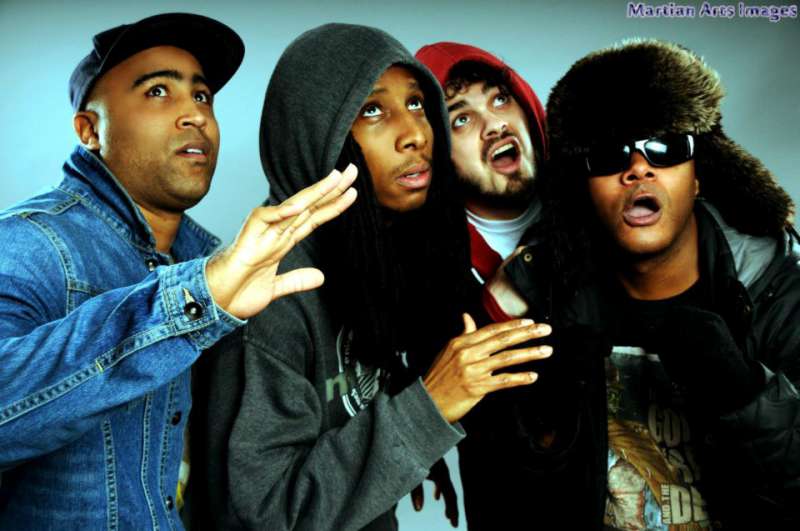 The Scribes are a new wave hip hop three piece consisting of vocalist/producer Ill Literate, rap monster Jonny Steele and beatbox maestro Lacey whose unique talents have combined to create a much heralded sound quite unlike any other on the scene today.

The Scribes are sponsored by independent, ethical and fair trade clothing company THTC (www.thtc.co.uk) alongside artist’s such as Ed Sheeran and Foreign Beggars and are signed with American record label “Kamikazi Airlines”, based in LA and co-founded by Dizzy Dustin of legendary hip hop act Ugly Duckling.

They have consistently proven to be an impressive and engaging live act with mainstage festival appearances at Electric Beach, Boomtown Fair, Leopalooza, Lemonfest, Gottwood and Brisfest and slots in Ibiza and Glastonbury Festival to name but a few, as well as being covered in the NME guide to Glastonbury and having their performance at the festival picked as one of the top 30 live shows by Venue Magazine.

The group have toured extensively across the UK and onto Europe, including slots at prestigious venues such as Camden’s Jazz Cafe, Cargo, Bristol’s O2 Academy, Ibiza’s Atzaro Urban Event and Italy’s Metaponto Beach Festival and are also proud winners of the Exposure Music Award’s “Best UK Urban Act” and the EatMusic Radio “Best Live Act”, and have provided original music for BBC and Channel 4 television, as well as being featured regularly on both national and local radio and media including BBC 1Xtra and BBC Radio 1 Introducing.

The Scribes are hotly tipped as one to watch for 2015 with new album “A Story All About How” released back in January to critical acclaim and their own headline tour across the UK, as well as support slots with the likes of Macklemore, Example, De La Soul, Coolio, MF Doom, Souls Of Mischief and Wu Tang Clan’s GZA, and are steadily establishing a growing following across Europe to add to their already significant fan base.